On Sept. 24, the Denver Area Labor Federation delegate body, representing 90,000 union members, unanimously passed the following resolution condemning the actions of Denver District Attorneys Dave Young and George Brauchler following a July 17 protest.  They had arrested six protest leaders, held them for over a week without arraignment, and charged them with “kidnapping” because demonstrators encircled a police building. It is posted at Denver Area Labor Federation Facebook. 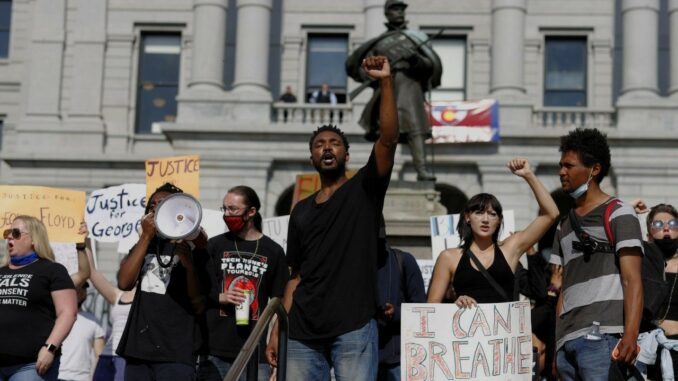 Demonstrators protest death of George Floyd at the Colorado State Capitol in Denver May 23.

Whereas, the Denver Area Labor Federation delegates reaffirmed our oath in 2016 to stand against fascism and to speak out when we saw [it] occur in our government.

Whereas, six peaceful protestors face felony charges, including kidnapping, for their involvement in protests on July 17, 2020, in Aurora, Colorado. These arrests and ridiculous charges against organizers are a clear example of fascism. The government is cracking down on the right to organize, protest, and dissent. We must live up to our oath and defend our democratic rights in this time of growing fascism.

Whereas, charging the organizers with “kidnapping” for holding a protest outside the office of those in power is a dangerous precedent. This opens the pathway for employers to call the cops and arrest union members on picket lines for similar charges of “kidnapping.”

Whereas, the union members who fought and died for our rights as workers in Colorado faced similar charges of “inciting a riot” and “destruction of property.” Police and the government targeted our leaders and activists in the past. If we do not stand against these unjust arrests now, we do a disservice to the memory of those who built our labor movement.

Whereas, we must draw a hard line now. We know that if we do not stand up to these attacks against organizing and protesting, union organizers will be targeted next.

Whereas, the organizers arrested have been held without a bond hearing for over five days. This is clearly a violation of due process rights and an effort to intimidate and retaliate.

Whereas, we shall never forget that recently deceased Congressman John Lewis was also arrested and beaten by the police when he and 600 civil rights activists marched on the highway in Selma, Ala.  Upholding civil rights and the right to live with dignity and respect requires civil disobedience.

Therefore, be it resolved that the Denver Area Labor Federation calls on District Attorneys Dave Young and George Brauchler to drop the charges against the recently arrested anti-racist organizers;

Resolved that the Denver Area Labor Federation condemns the actions of District Attorneys Young and Brauchler for using their offices to overcharge protest leaders in a clear effort to intimidate protestors;

Resolved that we urge our affiliates and partner organizations to adopt a similar resolution,

Resolved that this resolution be made public for any and all to see.