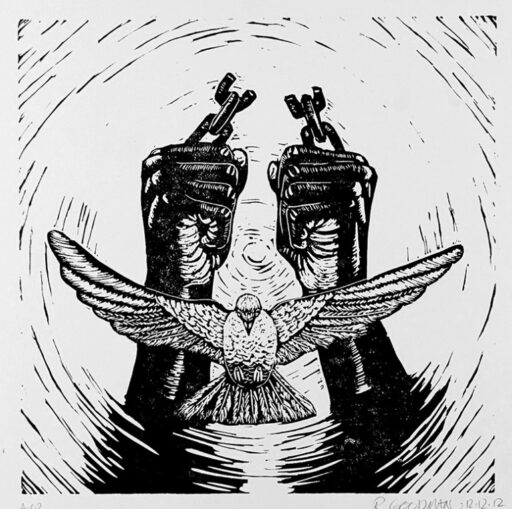 In our global struggle for liberation from capitalism, imperialism, white supremacy and patriarchy, we cannot waver in our determination to ‘Tear Down the Walls’ of human cages. Since the inception of these United States, prisons, jails, migrant detention centers, and psychiatric facilities have been targeting particular populations for genocide.

Racist, sexist, homophobic, and anti-poor practices have been codified into law by enslavers and perpetuators of Indigenous genocide.  They have been upheld through courts, police and prisons. However, facing physical violence has not always been a given, nor does it have to be. The 1% of the ruling class denies us the right to fight back against a system that seeks to eradicate us. Who are they to deny us the right to fight back?

An existential threat to anyone’s life produces a response. When we think about how the only cop who faced legal recourse for the murder of Breonna Taylor was hit with a charge about firing a gun that could have hit neighbor’s property; when we think about the forced sterilizations of migrant women in ICE detention in Georgia; or when we see the righteous anger of mass anti-racist protests in response to the myriad of killings enacted by the state, Workers World Party supports the right of the oppressed to self-defense against racist and anti-LGBTQ2S+ assault.

We not only ask for life, we demand it. We cannot look [for change] to the system responsible for our present condition. At every turn it has been codified into law, and perpetuated violence against women and gender-nonconforming people worldwide. But we can look to each other and militantly fight what we’re all facing.

An injury to one is an injury to all. And we know justice comes from the people. People are powerful. We’ve seen before the might of our movements’ wins for  freedom for friends, family, neighbors, and our class in cages. Struggles and fightbacks in support of the New Jersey 7, the San Antonio 4, CeCe McDonald, Joan [Joanne] Little and the MOVE 9 have seen tremendous wins and proven mass movements as credible threats in resisting our oppressions collectively.

The long history of movement struggles around women and gender-oppressed people in prisons has produced many important wins. Supporting the survival and resistance of women and gender oppressed, especially in prisons, creates the opportunities for us to imagine, organize and build a world where harm against us is not a constant threat.

Another example of collective movements winning better conditions for us all, including the most oppressed, is the 1975 uprising at the North Carolina Correctional Center for Women in Raleigh that lasted five days. Sparked by a spontaneous sit-in over a range of grievances, the women refused all prison activities and engaged in pitched battles with guards and state police, and ultimately won the shutdown of the laundry where they worked.

Many of the women workers incarcerated at NCCC were historically subjected to forced sterilizations at the hands of the state. The 1919 “Act to Benefit the Moral, Mental, or Physical Conditions of Inmates of Penal and Charitable Institutions” directly impacted women and gender-oppressed workers held there and partly fueled what became their militant work stoppage.

These sterilization programs were common across the U.S. South, but North Carolina was unique for at least continuing the practice until 1977. The stated purpose of this practice was to enhance the state’s “gene pool” by selectively sterilizing the “abnormal, unintelligent, or mentally disabled,” though it was justified in other ways. (“Dixie Be Damned: 300 Years of Insurrection in the American South,” 2015)

Winning better conditions for us all, inside the prison walls and out, can be done by the militant, collective withholding of labor.