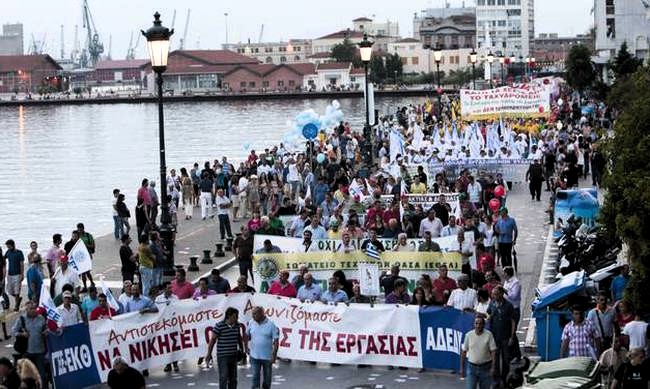 Protest against austerity by Greek union confederations in Thessaloníki on Sept. 5.

Students and teachers at over 700 schools and universities throughout Greece walked out the first week of October. Thousands of workers marched in Thessaloníki, both at the beginning and at the end of September. Workers and other progressives had sharp confrontations with the cops.

U.S. Secretary of State Mike Pompeo was one special target of the protests. Pompeo’s visit to Greece at the end of September was designed to let Turkey, which disputes Greece’s claim on oil and gas in the eastern Mediterranean, know the United States is leaning toward supporting Greece.

Pompeo’s visit started in the second largest city in Greece, Thessaloníki, a manufacturing and transportation hub for the Balkans. Thousands of workers were called out into the streets by the All Workers Militant Front (PAME) and the Committee for International Detente and Peace, as well as student groups, to protest Pompeo’s visit. Protesters marched behind a banner which read “No water, no land to the people’s killer.”

During the last decade, U.S. and European banks forced an austerity on Greece that cost it over 25% of its economy and led over 500,000 people — mostly young and educated — to flee their homeland.

After visiting Thessaloníki, Pompeo flew to the home of Prime Minister Kyriakos Mitsotakis, himself the son of a former prime minister and a graduate of Stanford University and Harvard Business School. Speaking the next day at a joint U.S.-Greece military base, Pompeo hailed Greece as a “pillar for stability and prosperity.” He said the country had become a strong U.S. military partner. (Washington Post, Sept. 29)

The Greek Communist Party (KKE) held a march on the U.S. Embassy in Athens that sharply confronted the police. Police complained that red paint was thrown on the nearby statue of Harry Truman, who was U.S. president during Greece’s civil war of 1946-49 and intervened against the workers’ side.

The KKE says the Pompeo visit was designed to further the “co-exploitation plan between the bourgeois classes of Greece and Turkey” and to promote “U.S. geopolitical (economic and military) interests.” Greece has been turned into a vast military base for the U.S. and NATO. Its economy has been closely aligned with U.S. business interests. (tinyurl.com/y5ahc7un)

Earlier in September, Prime Minister Mitsotakis came to Thessaloníki to give a speech before a trade fair to propose a new austerity plan to Greece’s creditors.  PAME, along with the other major trade confederations, held major demonstrations pointing out that the workers had already paid enough and that they were opposed to a third bailout involving more austerity.

They were demanding essential health protection measures in schools: fewer students in each classroom, new classrooms opened, teachers and cleaning staff appointed. The government’s response was authoritarian repression. Since clean schools that allow for social distancing are a matter of life and death, this struggle is unlikely to dissipate.