Donald Trump, who sat by while so many died, undercut health professionals’ recommendations for fighting the COVID-19 pandemic, mocked wearing a mask, placed capitalist profits over the lives of thousands and put forward no serious plan to address the pandemic, is now sick himself. The chickens have come home to roost. 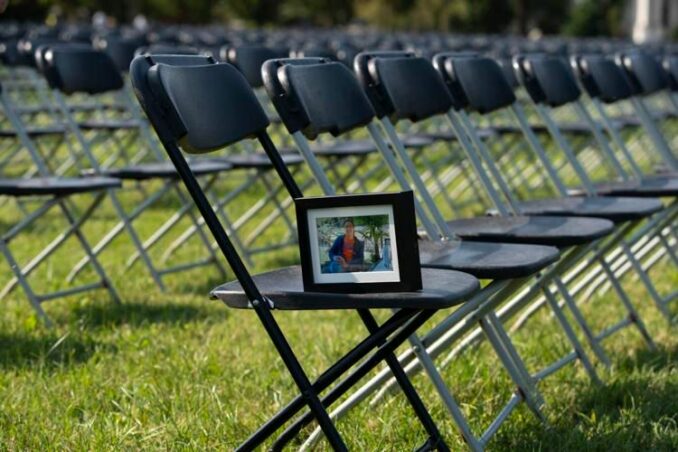 On the Ellipse outside the White House, a photograph of Leo Villanueva, who died from COVID-19, sits on one of 20,000 empty chairs, representing a fraction of the over 214,000 lives lost during the pandemic.

Unlike the millions of workers who have lost their jobs and health insurance because of the pandemic, or never had coverage in the first place, Trump is receiving top-of-the-line health care, including experimental treatments not yet available to the public. While he is receiving medical care immediately after his diagnosis, most people, especially people of color, must wait until they develop serious symptoms to be treated.

No resource will be spared to save the man who has allowed more than 214,000 people, disproportionately Black, Brown and Indigenous, to die from the pandemic. The U.S. response under his watch has been a complete failure: With only 4% of the world’s population, the U.S. as of Oct. 5 has had more than 20% of total COVID deaths (worldometers.info/coronavirus), with many more to come. 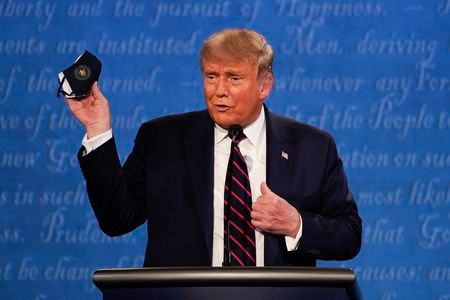 Trump holds mask but would not wear one.

There is without doubt a poetic justice to Trump falling ill, and it is grotesque to expect that those upon whom he has inflicted so many horrors — from his open support for white supremacy and mass migrant detentions, to warmongering abroad and a disastrous pandemic response at home — should extend to him a kindness and concern he has shown himself so completely incapable of expressing toward others.

This is not how the liberal wing of the ruling class views the situation, however. Within hours of Trump’s announcement, Joe Biden, Rachel Maddow and other liberal figures expressed their best wishes and hopes for his recovery.

In a moment Trump is transformed, in the liberal view, from a monster single-handedly capable of destroying the world to a frail and infirm elder statesman.

The ease with which the vitriol of 24-hour cable news evaporates exposes that the different wings of the ruling class, from the most liberal to the fascists, have more in common than it might appear and that they are all united in their commitment to maintaining the political machinery underpinning the capitalist system. Their disagreements mostly boil down to different approaches toward that shared goal, to how much the carrot vs. the stick should be used to keep working and oppressed people in line.

While liberals may call for turning the other cheek, for extending love to those who hate, the revolutionary view is rather different: You do not owe kindness to those who wish to exploit and kill you — you are worth more than that. To feel anger, rage, even hatred toward them is not narrow-mindedness; it is a statement of self love, a demand for dignity, for yourself and working and oppressed people as a whole.

The liberal approach values respectability and decorum over the righteous rage of the oppressed. It is for peace, with or without justice (most often without). In this sense, it is very much an obstacle to working and oppressed people fighting for a better future, an obstacle more subtle but sometimes even more powerful than the open reaction of the far right.

In any case, Trump is likely to recover from his illness, given the exceptional standard of care he is receiving. But should he die, it would be a mistake to expect that the many crises facing working and oppressed people — from health care, police brutality and unemployment to housing shortages, forced migration, imperialist war, environmental catastrophe and so many more — will be resolved as a result.

These crises existed before Trump, and they will exist after him. They are not the result of an individual’s actions or even those of a political party, but of an entire system: capitalism.

Capitalism is based on private ownership of the means of production by a class, the capitalist class, which rules and organizes society for its own benefit, for its profits. This is in contrast to a socialist system, in which working and oppressed people take over the means of production, which they have built with their sweat and blood, and reorganize society to address the needs of all.

It’s not a coincidence that countries building socialism — like Vietnam, Cuba and China — have had uniformly superior responses to the pandemic. The solution to the crises before us lies not in the removal or coincidental death of a single individual, but in the revolutionary overthrow of the entire capitalist system through the organized struggle of working and oppressed people.

But getting back to Trump himself and whether he and his class are deserving of compassion, it’s worth remembering the jacket that Melania Trump, who is sick now along with others in his entourage, wore when visiting migrant children separated from their parents. On the back it read: “I really don’t care. Do U?”