Big business neglect of the COVID pandemic continues to bring suffering and death to workers everywhere.

Essential workers, like the packinghouse workers at a frozen vegetable plant in Pasco, Wash., are fighting back. Hundreds of other strikes and job actions are also taking place across the country. 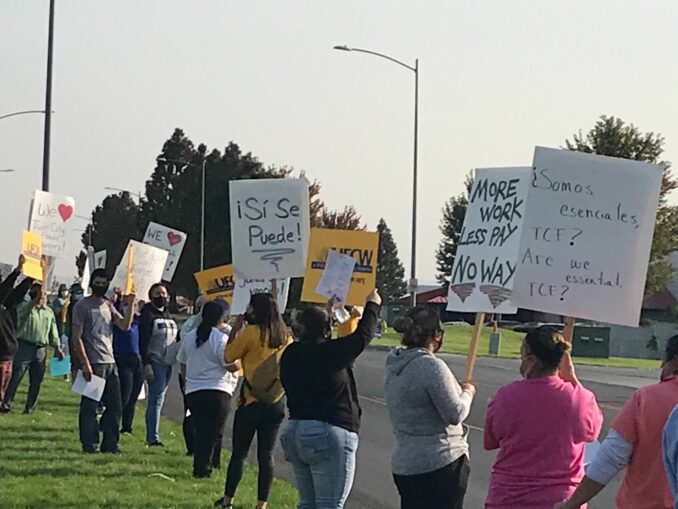 Workers at Twin City Foods in Pasco, along with those in the nearby Yakima Valley, held a work stoppage earlier in the pandemic. They have been demanding recognition of their union, United Food and Commercial Workers Local 1439, to protect themselves from Twin City’s attacks and neglect during the pandemic.

Two of the plant’s workers have perished from COVID-19. One of them had been taken directly from the plant to the hospital, where he died. Some 80 workers rallied in protest at the plant on Oct. 2. They received statements of support from at least five local elected officials.

The two who died were both seasonal workers from Mexico. The picketers say that those who come here to work are being sent back in ashes. The plant has 300 to 400 workers, of whom 230 are year-round packinghouse workers. The seasonal workers come from Mexico on temporary visas, an expanding program of the most exploited.

The workers want union representation. They demand basic COVID protections, affordable health care and a voice at work. They want to be paid as essential workers, have improved access to protective equipment and have the plant shut down to be sanitized.

Earlier this year, when workers brought their cloth face coverings to work, they were told by management they weren’t authorized to wear them. One worker said she knows at least 15 workers who have tested positive for COVID. Union organizers say that management is not giving workers any updated information on sick or quarantined workers.

One of the workers, Jose Rafael Garcia, said he developed symptoms of COVID-19 in August. After recovering, he notified the company on Aug. 29 that he had now tested negative, but was told by management that he wouldn’t be allowed to return to work.

Twin City Foods has great wealth to provide health and compensation for the workers. It has four big plants in the states of Washington and Michigan, with $225 million in yearly sales.

Twin City’s war on the workers is shown by its discriminatory treatment of its employees, most of whom are Latinx and im/migrant. These workers are essential, because they risk their lives in a crowded plant so that the rest of the country can have food on the table. Yet they are treated as if their lives are worthless.

This can be seen in the fact that 43% of Washington state residents who have COVID-19 are Latinx, while Latinx people comprise only 13% of the population.

The entire power structure is complicit in this, from the Trump administration on down to the state’s Democratic officialdom, who refuse to enforce basic health, safety and labor regulations.

Workers have gained considerable support in the Pasco/Tri-Cities area, which is greatly needed when going against the pro-agribusiness power structure of the region.