Oct. 4 — The worldwide Boycott Divestment Sanctions (BDS) movement has become such a thorn in the side of the Zionist occupiers of Palestine that in 2015 the Israeli settler-state declared it a “strategic threat” and has since spent tens of millions of dollars to combat it. 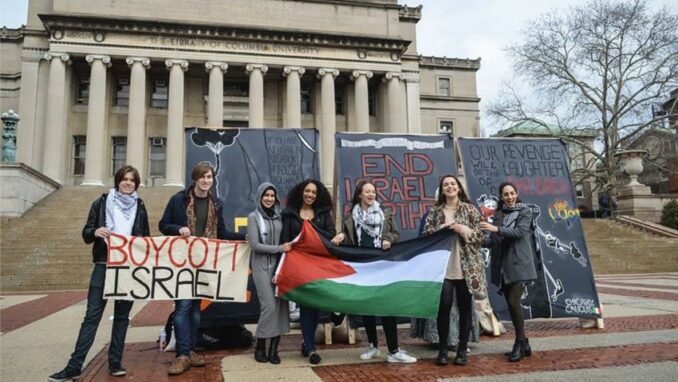 Some of these funds have been used to set up cyber-based employment lists aimed at extortion, like the Canary Mission. The website targets students and teaching staff who are active in the Palestine solidarity movement.

But there was no stopping the students of the University of Illinois at Urbana-Champaign, a Midwestern mega-campus with over 50,000 students and over 2,500 teaching staff members. On Sept. 23, the Illinois Student Government backed a resolution which called for UI-UC to “divest from companies that support fossil fuels, the prison-industrial complex, Israel’s military and local police departments.” (The Daily Illini, Sept. 28)

And on Oct. 1, students at Columbia University in New York City voted to support a BDS referendum, with a final vote count of Yes – 1,081, No – 485, Abstain – 205. The referendum asked: “Should Columbia University divest its stocks, funds and endowment from companies that profit from or engage in the State of Israel’s act towards Palestinians, that according to Columbia University Apartheid Divest (CUAD), fall under the United Nations International Convention on the Suppression and Punishment of the Crime of Apartheid?” (tinyurl.com/y4ckefof)

Olivia Katbi Smith, the North American coordinator for the BDS Movement observed, “These campus BDS victories are indicative of the rapidly changing tide we’re seeing across the United States. Despite the escalating campaigns of repression on campuses and in the halls of government, it is becoming impossible to be ‘progressive except Palestine,’ because it is becoming impossible to silence our movement.

“The Palestinian struggle for freedom, justice and equality so clearly intersects with all other struggles of oppressed peoples everywhere.” (mondoweiss.net, Sept. 30)