An unjust hardship faces 800,000 workers worldwide. Some 400,000 seafarers whose work contracts have expired are still stuck on their ships in the COVID-19 pandemic. Another 400,000 workers are stuck on shore, unemployed, waiting to replace the workers on the ships. 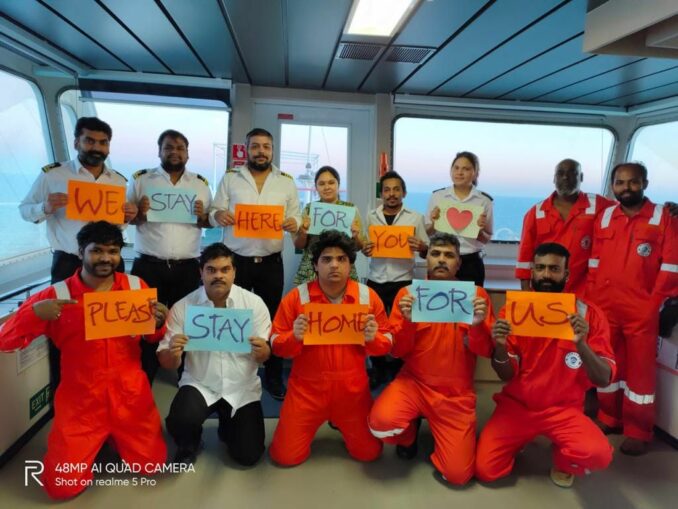 Getting off a ship and going home requires more than just disembarking. It usually involves multiple border crossings, flights with at least one connection, certificate after certificate, specialized visas and more. A crew member’s replacement has to go through the same steps.

In response to the COVID pandemic, corporate and government entities have broken every one of these steps. Airlines have canceled flights; consulates have closed; countries like the Philippines have closed their borders even to their own citizens.

At a conference at the U.N. General Assembly, which the International Transport Workers’ Federation (ITF) helped organize, Captain Hedi Marzougui said his crew  “had to work every day, for 12 hours, with no weekends, without seeing your loved ones, and trapped at sea. Now add that you have to do that with no idea of when you will be repatriated.” Marzougui was in command of a vessel between December 2019 and May 2020. (Hellenic Shipping News, September 26)

Earlier the ITF conducted a survey of conditions on board some of the 60,000 vessels that transport 90% of world trade. The ITF found that some crews shaved their heads, because they couldn’t get off the ship to buy shampoo. On another ship the captain had to pull teeth, even though he had no dental training. Social distancing was generally impossible. Around 70% of the seafarers said their contracts had expired. Almost all said they faced serious mental health issues.

Seafarers whose contracts have expired have the legal right to stop working. Countries have the right to inspect ships to make sure they are properly crewed and the crews have been properly paid. The Australian Maritime Safety Authority has been aggressive in its ship inspections and support of seafarers, ensuring that they are being treated fairly by the shipowners. At least four ships have been detained in Australian waters. (tinyurl.com/yx8kgzkm)

The ITF has said it will support any crew that strikes.

Back in March, Cuba showed how it was possible to move passengers and crew from a cruise ship which had COVID-19-infected people on board. The MS Braemar, a Bahamian flagged vessel, had been going from port to port, trying to disembark its passengers, and had been repeatedly refused.

Finally, when Cuba made it known it would accept the ship, the MS Braemar docked in Havana. The Cuban authorities, following World Health Organization guidelines, loaded over 1,000 passengers and crew on special buses and took them to Jose Martí airport for chartered flights back to Britain. (tinyurl.com/y62w84jy)

If Cuba can do this, why can’t the big countries of the world, who make so much money from world trade, solve the problems of 800,000 seafaring workers?