By Lyn Neeley and Judy Greenspan 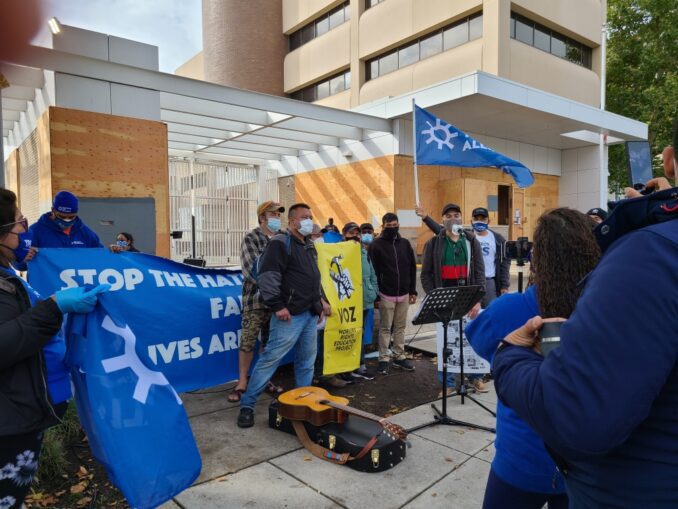 The San Francisco-Oakland Bay Area and Portland, Ore., were the first two stops on the TPS (Temporary Protective Status) workers’ “Journey for Justice” caravan tour, which left Los Angeles on Sept. 21. Traveling in their bus, “La Libertad,” members of the two-month tour will stop in 46 cities to raise awareness and get support for the 300,000 TPS workers who have been stripped of their right to “legally” work in the U.S.

On Sept. 22, TPS workers held a press conference and rally in front of the new San Francisco Federal Building, where Nancy Pelosi has an office. They want the federal government to reverse its decision to end TPS for 40,000 immigrant workers, some of whom have been working in the U.S. for nearly 40 years. Most recipients, like Claudia Lainez of Oakland, a national TPS organizer who is on the bus trip with Stephanie, her 20-year-old U.S.-born daughter, are long-term residents with deep ties in their communities.

In Portland, a TPS press conference and rally were held Sept. 23 in front of the boarded-up building of Immigration and Customs Enforcement (ICE), and then moved to the VOZ Worker Education Project center. The windows of the ICE facility have remained boarded up for more than a year, following Occupy ICE demonstrations that lasted from June 17 to Aug. 1, 2019.

Portland is the first U.S. city where Occupy ICE protests were held against Trump’s “Zero Tolerance Policy,” which has led to the arrests of thousands of im/migrants from Mexico while crossing into the U.S. and separated more than 2,300 children from their undocumented parents. During the protests, windows were smashed with rocks and dumpsters were set on fire.