Sept. 28 – Protests erupted around the U.S. on Sept. 23 when the announcement first came down that no police officer would be charged in the murder of Breonna Taylor. She had been shot to death in her bed in Louisville, Ky., on March 13.

These protests took place in the thousands over multiple days in both Louisville and New York City.

In New York, an interstate and a bridge between Brooklyn and Manhattan were both shut down. 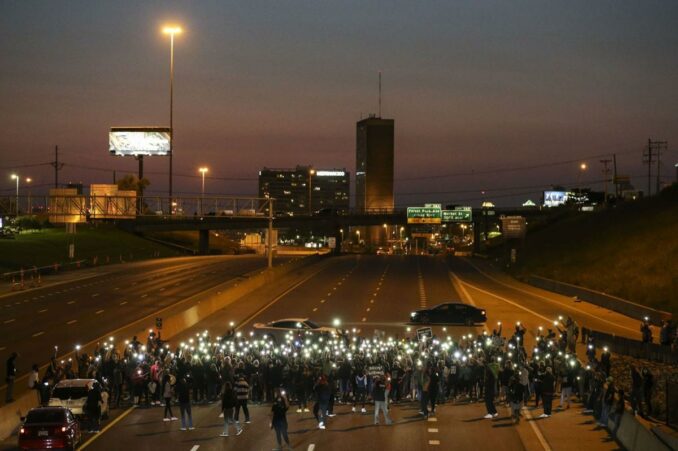 Outraged by grand jury ruling, protesters shut down I-64 in Louisville on Sept. 24.

In Louisville, demonstrators defied curfews and risked arrest as local police and the National Guard attempted to intimidate them with tear gas and swinging batons.  Among those arrested were state Rep. Attica Scott (D), the only Black woman state legislator in Kentucky, who is facing one felony count for “rioting” and two misdemeanor charges.

Other protests took place in large and small cities, including Philadelphia, Seattle, St. Louis, Denver, Nashville, Oakland, Boston, Detroit, Eugene, Los Angeles, Chicago, Washington, and elsewhere.  Athletes and coaches expressed anger and frustration in the National Basketball Association and Women’s NBA playoff bubbles. All the teams in the WNBA have devoted their playoffs to Breonna Taylor.

The University of Louisville men’s basketball team led a protest on Sept. 25 in Louisville.

The main political themes of these demonstrations, besides “Arrest the killers of Breonna Taylor,” were also “Abolish the police!” and “Defund the police!”

The murder of Taylor has generated a national outcry demanding police accountability for the murders of Black and Brown women, men and children and in defense of Black Lives Matter.

More than six months after the heinous March 13 murder of Taylor – a 26-year-old African American emergency medical technician – by three white Louisville, Ky., police officers, a secret grand jury on Sept. 23 charged only one of those officers with three counts of “wanton endangerment.” And this was after four months of supposed investigation.

What does this mean exactly? It means that Officer Brett Hankison was charged only with endangering others, when bullets he sprayed into Taylor’s apartment traveled into a neighboring unit, threatening the lives of three neighbors, who are white. Not one single charge was filed against the other two cops. Hankison is now out on $15,000 bail.

Kentucky Attorney General Daniel Cameron (R) made the announcement, explaining that the three cops were justified in shooting multiple rounds – six of which hit Taylor as she was sleeping – in “self-defense.”  Taylor’s partner, Kenneth Walker, shot at the cops when they broke down Taylor’s door with a battering ram.

Cameron’s claims that Walker wounded one of the cops turned out to be false based on a recent ballistics report. (courier-journal.com, Sept. 27)

They were carrying out a “no-knock” search warrant during an ill-advised drug bust.

Walker stated that the cops never announced who they were, as he tried to defend Taylor and himself.  Rep. Scott proposed a statewide law to negate the “no-knock” warrant, which was recently passed. She was recently arrested.

The fact that not one cop was charged with murder, not even manslaughter, for taking the life of this young Black woman, is but another tragic but important reason why the Black Lives Matter struggle deserves broad classwide solidarity.

It took the public lynching of George Floyd in Minneapolis on May 25 to help bring national and international awareness to Taylor’s murder, which had happened more than two months earlier.

Civil rights attorney Benjamin Crump commented following the ruling:  “This is outrageous and offensive! If Brett Hankison’s behavior was wanton endangerment to people in neighboring apartments, then it should have been wanton endangerment in Breonna Taylor’s apartment, too. In fact, it should have been ruled wanton murder.” (Washington Post, Sept. 23)

The family of Breonna Taylor, including her mother, Tamika Palmer, and Walker were present at a Sept. 25 press conference in Louisville, along with family attornies Crump and Lonita Baker.  The lawyers and family are demanding that the secretive grand jury reveal the entire transcript to the world that led to their shocking ruling.  They are also calling for a special prosecutor to be appointed to present evidence on behalf of Taylor before a grand jury.

Crump commented, “What did Kentucky Attorney General Daniel Cameron present to the grand jury? Did he present any evidence on Breonna Taylor’s behalf? Or did he make a unilateral decision to put his thumb on the scales of justice to help try to exonerate and justify the killing of Breonna Taylor by these police officers? And in doing so, make sure that Breonna Taylor’s family never got their day in court.

“Release the transcript so we can have transparency.  And if you did everything you could do on Breonna’s behalf, you shouldn’t have any problems whatsoever, Daniel Cameron, to release the transcript to see you fought for all of Kentucky’s citizens.”  (ABC News, Sept. 25)

In a written statement read by Taylor’s aunt, Bianca Austin, Tamika Palmer stated that Cameron “had the power to do the right thing. He had the power to start the healing of this city.  [He] helped me realize … it will always be us against them.  That we are never safe when it comes to them.” She went on to say that she has “no faith in the legal system, in the police, in the laws that are not made to protect us Black and Brown people.”

Palmer said Cameron “alone didn’t fail her,” and that her daughter was also failed by “the judge who signed the search warrant … the terrorist who broke down her door … [and] the system as a whole.”

One of the grand jurors has filed a motion on Sept. 28. The motion demands that the recordings of the grand jury proceedings be released to the public. It states that the jurors were not given proper instructions to include the option of indicting Sgt. Jon Mattingly and Detective Myles Cosgrove for firing the bullets that killed Taylor.  The juror also asks to speak publicly on this matter.

Police and capitalism are intertwined

Palmer’s statement rings so true, not only with the individuals responsible for her daughter’s senseless death but the whole rigged, bigoted system of oppression.

Abuses by the police, the courts, the prisons and the laws targeting Black and Brown people like George Floyd, Breonna Taylor, Sandra Bland and countless others are not isolated instances. These institutions reflect bigoted, irreconcilable differences when it comes to race and class.

Under capitalism – a particular form of society that divides people into haves and have nots, the ruling class and the multinational working class – the lives of Black, Brown and Indigenous people are devalued by a repressive state apparatus resting on the centuries-old foundation of white supremacy.

How else can it be explained that a Louisville cop can be held accountable for destroying walls, but not for taking the life of a human being?

Or that a 17-year-old neofascist, Kyle Rittenhouse, can shoot to death two anti-racists in Kenosha, Wis., while the police look the other way – but a 12-year-old Black child, Tamir Rice, can be fatally shot on the spot by police in Cleveland for playing with a BB gun?

The police, the U.S. Border Patrol and other agencies exist to keep social order –  that is, to use any repressive means to protect the private property of the bosses stolen from the collective wealth and labor of the global working class.

This order is why it is so difficult to get justice for the victims of police violence. The laws provide immunity for the police, who act as an armed agent of the bosses against the workers.

The clarion call to abolish the police, not just as individuals but as a militarized oppressive force that is diametrically opposed to the interests of the workers and oppressed, will continue to grow louder.

The fact that not one cop was charged with murder or even manslaughter for taking the life of this young Black woman is but another tragic but important example of why the Black Lives Matter struggle deserves broad classwide solidarity. It took the public lynching of George Floyd in Minneapolis on May 25 to help bring national and international awareness to Taylor’s murder, which had happened more than two months earlier.

In the end, the only way to abolish the police is to abolish the system that has sustained this force since the days of U.S. slavery. And that system is capitalism – a system that prioritizes profits and private property before meeting the basic human needs of the workers, who need jobs, housing, health care, education and much more. Only a socialist revolution can ultimately win these demands – not an election, that does not change class relations.

Waging a global, classwide struggle to help empower the working class through workers’ assemblies, workers’ defense committees against right-wing fascists and other sustained, organized formations will win real justice for the Breonna Taylors and George Floyds of the world.