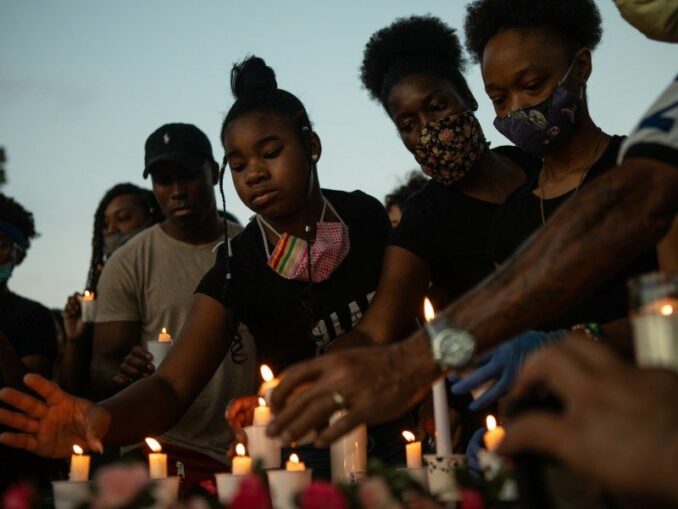 Outraged protests have been ongoing since Sept. 15, when officers of the San Antonio Police Department shot and killed Darrell Zemault Sr., a 55-year-old Black man, at his home in southwest San Antonio. The SAPD has repeatedly changed its story, trying to justify the killing. Zemault’s neighbors, who actually witnessed the event, call it outright murder.

According to these witnesses, plainclothes cops arrived in an unmarked van, dragged Zemault from his house, assaulted him, and shot him. Cops refused to allow a neighbor, who is a nurse, attend to her friend while they huddled for 10 minutes in what witnesses characterized as an obvious effort to get their story straight. Meanwhile, Darrell Zemault bled out. When he was finally taken to a hospital by ambulance, he was pronounced dead on arrival.

Police claim they were trying to serve Zemault with a two-month-old warrant, and that Zemault resisted arrest, initiated a physical struggle, and grabbed a cop’s gun. With eyewitnesses disputing that as a patent lie, Zemault’s family and Black Lives Matter activists charge a coverup and demand that the SAPD release the cops’ bodycam footage.

Backed by Mayor Ron Zirenberg, a liberal, the SAPD has refused to release the video footage.

Celeste Brown, a local BLM leader who told reporters Zemault was “like a second father” to her, challenged every part of the SAPD’s story.

Brown said, “I’m out marching and organizing and fighting for policy change and you never think that it’s going to hit home, and it should never have to hit home.

“Let me make one thing very clear, and I’ve said this already, they messed with the right ones because we don’t play this,” she added. “I’m a community organizer, I do this work by day, and now that they’ve hit my family, if they thought that we were bugging City Council for policy change before, if they thought we were marching too much before, they messed with the right ones because Darrell Zemault was not the man they are already painting him out to be.”

Vigils, marches and rallies have demanded justice for Darrell Zemault Sr. Hundreds have also contributed to a fund to help his family. On the hot, sunny afternoon of Sept. 26, hundreds of people stood in a long line to buy plates at a barbeque fundraiser.

Here in San Antonio, a key focus of the upsurge that has swept the country in the wake of the murder of George Floyd in Minneapolis last May 25 has been a drive to cut the police budget and weaken statutory police protections. A group called Fix SAPD is waging a petition drive to show mass public support for its demands.

The demands aim to (1) repeal two chapters of the state government code that basically immunize police from any accountability for their actions; (2) eliminate disciplinary barriers enshrined in the city’s contract with the cop union; and (3) significantly cut the SAPD budget while reallocating the funds to human services.

How has the city government responded? On Sept. 18 the majority-Democratic City Council passed a $2.9 billion budget for 2021 that not only did not reduce police funding—it increased it. The budget boosted the SAPD by $8 million.

It was a slap in the face to the Black community and the fight against white supremacy and killer cops – so clearly that arch-reactionary Texas Gov. Greg Abbott tweeted his congratulations to the City Council.

Meanwhile, cops appear to be targeting individual BLM leaders. On Sept. 9, they arrested a young Black woman on felony child-abandonment charges. Claiming they were acting on an anonymous tip, Bexar County sheriff’s deputies arrived at the woman’s house in the early afternoon and waited there for three hours until she arrived home.

Whatever the truth—or likelier, falsehood, considering the source—of the deputies’ claims about the state of the activist’s household and children, the sheriff’s office focused on identifying her as a BLM organizer and making sure that was highlighted in news reports on the arrest.

All this takes place in the context of steeply rising hunger and houselessness, hitting the Black and Brown communities hardest. The U.S. Census Bureau reported one year ago that San Antonio had the highest poverty rate of any major U.S. city, at 20 percent. No new statistics are in yet, but it’s fair to speculate that this year’s twin crises of pandemic and unemployment have made things much worse. The San Antonio Food Bank reports 125,000 new recipients of its food aid since March of this year.