The Philadelphia Housing Action coalition and the City of Philadelphia reached a tentative agreement on Sept. 25 to give homeless activists 50 vacant, viable homes, and allow 50 homeless mothers and children to remain in 15 additional vacant city-owned homes taken over earlier this year. 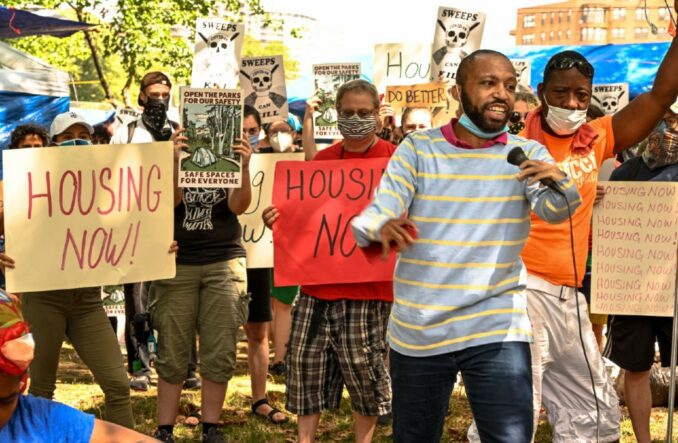 The agreement comes after six months of a direct action campaign – including housing takeovers, protest encampments and eviction resistance – to force the city to relinquish the vacant homes to a community land trust. The Philadelphia Housing Action coalition was formed over the winter of 2019-2020 by the Black and Brown Workers Cooperative, Workers Revolutionary Collective and OccupyPHA.

The most visible part of this fight has been two encampments involving hundreds of tents — Camp James Talib Dean (JTD) on 22nd St. and the Ben Franklin Parkway, and Camp Teddy at Ridge Ave. and 21st Street in North Philadelphia, across from the Philadelphia Housing Authority (PHA).

James Talib Dean was an organizer with the Workers Revolutionary Collective who cofounded that encampment. He died during its first week and would have celebrated his 35th birthday on Sept. 25.

Under the agreement, the vacant city-owned houses will be transferred into a community land trust set up by Philadelphia Housing Action – a coalition of housing activists who have all experienced either homelessness or institutionalization.  The properties will be designated permanently for use for extremely low-income housing ($25,000 and below).  A press release from Philadelphia Housing Action notes: “A recent Pew report states that 140,000 Philadelphia households earn $30,000 or less.”

The agreement will also allow 50 mothers and children, who took over 15 city-owned houses, to remain in the properties until the land trust can find other accommodations.

Philadelphia Housing Action spokespeople noted that the houses being transferred are slated for auction or sale and would not be taken from other low-income housing stock or jump people ahead of the PHA’s waiting list.

This tentative and partial victory comes after houseless activists at the two camps for months resisted repeated threats by the city to forceably evict them from the camps. Camp JTD was a particular focus, as it sits in the middle of one of the wealthiest areas of Philadelphia, surrounded by high-rise buildings with expensive rents.

‘This is only the beginning’

Sterling Johnson, a member of the Black and Brown Workers Cooperative, stated: “It’s a good start but it’s also not enough. There was already a major housing crisis in Philadelphia, and we anticipate a wave of mass evictions on top of that, due to COVID-19.  The scale of the housing crisis would require thousands of new units of low-income housing, but we feel that with this agreement we can at least get started moving people off the streets and into homes before winter. This is only the beginning.”

#OccupyPHA organizer Jennifer Bennetch said: “This will be a landmark agreement. Not only has a group of poor and homeless organizers managed through direct action to win an agreement that will set a precedent for the entire country, but we have also forced the city to exercise its power over the Philadelphia Housing Authority and finally get them to give up these vacant homes that have been blighting our communities for decades. We will continue to pressure the city to transfer more houses to be designated as permanent low-income housing, stabilize our communities and combat the displacement caused by market-rate development and gentrification.”

No national shortage of vacant homes

While activists in Philadelphia have put the spotlight on the crisis, it is by no means just a local problem. The National Alliance to End Homelessness estimates that the number of homeless people in the U.S. is around 552,930. At the same time, according to the U.S. Census Bureau, there were 17 million vacant homes in October 2019.

The problem is clearly not the lack of homes, but who controls them and the lack of affordability.

Following the mortgage crisis of 2008, many of the vacant housing units now on the market were homes that were foreclosed and taken by banks to sell for profit.

Houseless activists and their supporters in Philadelphia have demonstrated that they will take whatever action is needed to obtain housing – whether it be more encampments or families occupying vacant homes.  They have also shown the capability to defend themselves against state attacks.

This first agreement marks a battle win for houseless people in Philadelphia, but it will take a much broader war by the working class and oppressed against the capitalist system to fully secure safe and affordable housing for all who need it.