The historic 10-day strike by workers at medical facilities in three Illinois cities resulted in an all-out victory, with every demand met. Black and Latinx women workers played a decisive role in organizing the strike and steering it to its successful conclusion. 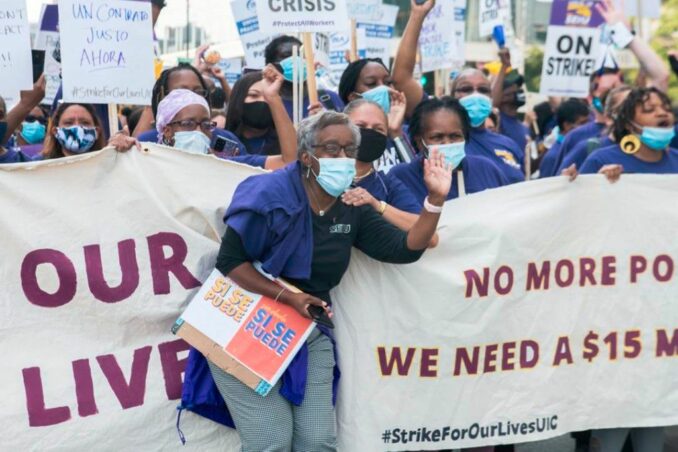 Chicago health workers in the ‘Strike for Our Lives.’

Over 4,000 members of Service Employees (SEIU) Local 73 launched an unfair labor practice strike on Sept. 14 at University of Illinois medical facilities in Chicago, Peoria and Rockford. After working without a contract for over a year, the workers had had enough! Moreover, as a threat, the bosses brought in strikebreakers from out of state in advance of the strike.

This job action demonstrated the determination and unity of medical center workers: maintenance, custodial, technical and clerical workers, occupational therapists and other professionals. It pressured the UI-Chicago bosses to give in.

The negotiated, tentative, multi-year contracts guarantee pay increases for all workers, including a $15 minimum wage in Chicago for those on the lowest-paid scale, safety measures to deal with COVID-19, adequate staffing and protection against management outsourcing of union jobs, reported the union’s bargaining committee on Sept. 24.

SEIU Local 73 President Dian Palmer said the settlement “is a victory for all working people in Illinois and shows what’s possible when workers unite and demand that employers respect us, protect us and pay us. I am so proud of the Black and Brown women who led this strike, who convinced their co-workers striking was worth the risk.

“They never gave up,” stressed Palmer. “They were out there at dawn every day demanding justice for essential workers. UIC called them heroes, but their pay and benefits didn’t reflect that, but UIC now understands what it means to be ‘essential.’” (seiu.org, Sept. 24)

‘We are loud and proud!’

Alicia Uwumarogie, physical therapist and SEIU bargaining committee representative, said, “We are leaving the picket lines victorious in so many areas! We have gained the confidence and strength to take on management. We have demonstrated our collective power through the execution of this strike. Our members will be loud and proud about this win and what we did in this past few weeks.” The workers will “continue fighting until justice, fairness, equity and respect become the norm at UIC.”

Striking nurses at UIC Hospital joined SEIU Local 73 workers on the picket lines and at a Sept. 18 rally in downtown Chicago. They struck for seven days beginning Sept. 12, with demands including a prohibition on outsourcing of union nurses’ jobs to inadequately trained, nonunion nurses. Although hospital management obtained an injunction to bar nurses from striking, 800 UIC nurses defied the bosses and picketed.

The Illinois Nurses Association reports a tentative agreement has been reached,  granting pandemic hazard pay, hiring of more nurses and provision of more PPE.  The 1,400-person bargaining unit will vote Sept. 28 on whether to approve the contract, the same day as Local 73’s contract vote. (Chicago Sun-Times, Sept. 24)

Teamsters and Electrical Workers (IBEW) locals honored the SEIU Local 73 picket lines and joined strikers in solidarity, as did individual union members. These courageous workers showed that even in the anti-labor Trump era, a strong, united strike force can win.

Many union organizing drives and job actions have been led by women this year in defiance of the antilabor, pro-corporate Trump administration. Trump’s appointees to the so-called Department of Labor and National Labor Relations Board, as well as the Supreme Court, have attacked and weakened unions’ and workers’ rights.

In July, in a historic, landslide vote, childcare providers in California voted to unionize — a stunning victory for the U.S. labor movement. They voted to establish and be represented by Child Care Providers United, a collaboration among United Domestic Workers of America/American Federation of State, County and Municipal Employees Local 3930 and SEIU Locals 99 and 521.

This workforce is composed primarily of women — Black, Latinx and immigrant — making this victory even more significant as part of the overall fight for racial, gender and economic justice.

Nurses at Mission Hospital in Asheville, N.C., voted to unionize in an NLRB election Sept. 16, in what National Nurses United called the “largest hospital union victory in the South since 1975.”

And registered nurses at Alameda Hospital and San Leandro Hospital in California plan a five-day strike for Oct. 7 to demand management protect patients’ safety and provide sufficient staffing and PPE during the pandemic, reports the NNU’s website. The California Nurses Association said Sept. 26 that management has bargained in bad faith and taken punitive actions against nurses.

These righteous struggles show that workers are strong collectively and can fight and win, despite government and corporate hostility to the multinational working class and their organizations. These bold actions boost all workers — organized and unorganized.