People in this city — the scene of many past rallies by violent fascist groups — squared off once more against far-right groups, led by the Proud Boys, on Sept. 26. Pro-fascists organized under the banner of combatting the mass anti-racist movement, which has persisted in this city and across the country since Minneapolis police murdered George Floyd in late May. Anti-racists won today’s confrontation. 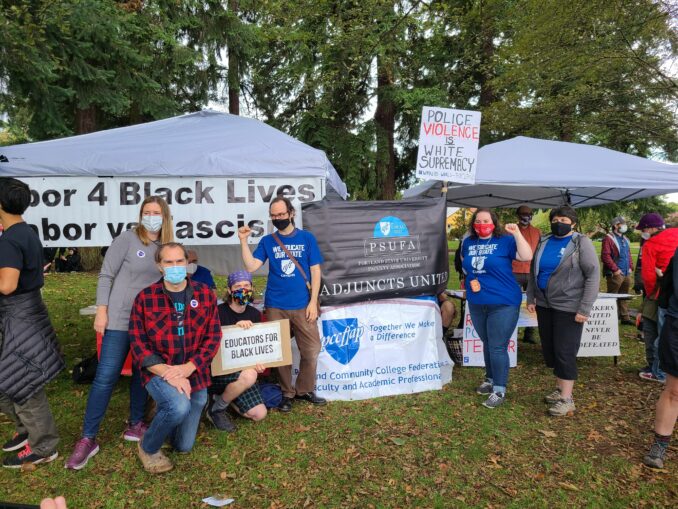 The right-wing rally took place just weeks after an anti-fascist activist, in defense of a Black friend under deadly attack, gunned down a far-right aggressor at a similar event downtown. Police and federal forces later summarily executed the anti-racist shooter in a raid south of Seattle, Wash., without even the pretense of a fair trial before a judge.

Only 200 people attended the Sept. 26 fascist gathering, which had been projected to bring thousands of far-rightists to a historically Black neighborhood in Portland’s north quadrant. Wide sectors condemned the fascist mobilization. Portland’s Mayor Ted Wheeler, who is also police commissioner, released a statement condemning the rally, as did Oregon’s Governor Kate Brown. Brown declared a state of emergency in Portland, positioning herself as an ally of those opposed to racism and fascism.

Yet Brown’s declaration was welcomed by the Proud Boys. A state of emergency allows police to deploy tear gas against protesters, and the police have shown time and again that they will cooperate with far-right groups against leftist demonstrators.

The Trump administration has attacked Brown and Wheeler, both Democrats, calling them too soft on protesters. Nevertheless, after unprecedented amounts of tear gas were used against anti-racist protesters over the summer, Oregon’s state and local leaders faced a barrage of criticism from anti-racists for their complicity in the irresponsible, repeated tear gassing of crowds and neighborhoods in the state’s largest city.

To tamp down the outrage, Oregon’s leaders have issued orders restricting the use of tear gas and other repressive police methods, yet persistent loopholes allow the police to continue on, much as before.

For several years violent fascist demonstrators, who see the city as a leftist stronghold, have targeted Portland. The fascists aim to provoke conflict with anti-fascists and cause chaos in order to advance their far-right ideology, which they disguise as free speech. These demonstrations have become more frequent and more violent over the years, with the White House now fanning the flames of violent racism.

Portland, along with Seattle and New York, was recently declared an “anarchist jurisdiction” by the Justice Department. Trump has built his re-election campaign on a “law and order” platform that paints a distorted portrait of cities under siege by allegedly violent leftists. The president and federal officials have targeted Portland in particular, as they attempted to quash the anti-fascist movement, without success.

The relatively weak Sept. 26 fascist mobilization drew over a thousand counterprotesters at two separate parks. The event remained mostly calm, and as it concluded the police directed the pro-fascist participants onto the freeway and out of the state.

The New York Times spoke with one of the counterprotesters, who was with members of Workers World in a group called Portland Labor for Black Lives Matter. “Doreen McGrath, a 63-year-old activist, said she had driven in with a group of about 25 people from Seattle. Their group stood on the outskirts of the gathering, chanting and waving signs. ‘Hey there, Proud Boys, you better hide,’ they chanted. ‘We can see your fascist side.’’’

Anti-fascist and anti-racist activists had organized yet another successful show of force against far-right agitators in what has become an all-too-common event in Portland and other cities.

As soon as the Sept. 26 event was called by fascist groups, Portland leftists began coordinating and organizing their response. While many centrist liberals argue that far-right groups should just be ignored, or even accommodated for their “freedom of speech,” time and again the workers, students and oppressed peoples of this city have turned out in massive crowds to stand united against fascism and denounce racism. They know the fascists use their speech to freely mobilize to repress others.

The police protect far-right groups and coordinate with them. Leftists know that the people must keep each other safe and must always fight fascism whenever it arises. The future will surely bring more fascist rallies and violent escalations. With Sept. 26 as an example, the left has shown it will abandon no battlefield to the enemy.