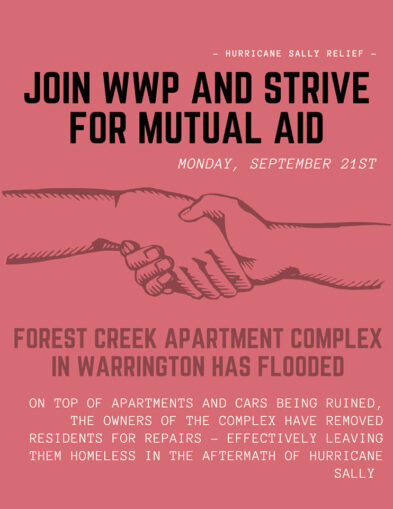 Creek/Muscogee land (Pensacola, Fla., and Gulf Shores, Ala.) — Hurricane Sally made landfall in Gulf Shores on Sept. 16 as a Category 2 storm. But meteorologists admitted its slow speed caused rainfall levels to match those of a Category 5 hurricane. It quickly moved towards Pensacola, collapsing a section of the mammoth Three Mile Bridge connecting Escambia and Santa Rosa Counties.

As Hurricane Sally bore down on northwest Florida and south Alabama, this writer sent out a message on social media:  “As usual, capitalism is not equipped to handle events like this. No homeless shelters would open up yesterday for the vast homeless population of northwest Florida.

“It wasn’t until 8:30 p.m. last night that two smaller shelters and one large makeshift shelter were finally opened up. …. The sheriff’s department started offering rides to any person who is homeless who wanted to go, but due to their ongoing abuse and mistreatment of the homeless population, no one trusts them enough to get in their cruisers.

“Now individuals in Escambia County with cars higher off the ground are driving around in this storm, picking up people from rained-out homeless camps and taking them to the shelter. Our public transportation, the city buses, which are constantly at risk of being defunded, are also picking people up.

“Once again it is the workers who are acting and saving the day.”

No shelter in the storm

Originally slated to hit southern Mississippi and Louisiana, Hurricane Sally instead slammed into these Alabama and Florida beach and tourist cities, which have a combined population of over 520,000 people. The effect of the hurricane was so powerful that power outages were reported in Panama City, Fla. — 80 miles away. The maximum wind speed at landfall was 105 mph, making this the strongest hurricane to hit the area since Hurricane Ivan in 2004.

Pensacola has a vast homeless population but, in the days before the hurricane the city administration carried on as though no catastrophe were coming for the houseless. No shelters opened their doors to accept anyone. No makeshift shelters were set up. FEMA or the Red Cross were nowhere to be found.

For an agonizing few days, houseless people in Pensacola wondered where they would wait out the storm. Finally, 12 hours before Hurricane Sally hit, the Red Cross announced the Pensacola Bay Center as a makeshift shelter. Additionally, two regular shelters decided to open their doors, waiving their insulting prerequisites (a $10 per night fee and a forced breathalyzer test for anyone who enters).

The problem with the larger makeshift Red Cross shelter was that it would not open until 8:00 p.m., long after the sun had set, and no one had bothered to secure mass transportation for the homeless populations to be moved there.

Bus drivers to the rescue

However, the courageous drivers of the ECAT (Escambia County Area Transit), Pensacola’s public bus system, braved the incoming rainfall and increasing wind speeds to pick people up and take them to shelter. Local reactionary politicians have been trying to gut ECAT for years and put bus drivers and public transit workers out of a job. If their plans had been successful, who would have picked up all these people caught in the deadly storm and transported them to safety?

A second, much less popular strategy was tried out by the Escambia County Sheriff’s Office, which drove around to homeless camps, or up to people who were homeless, and offered them rides to the shelters. But the ECSO has a long history of violence, harassment and abuse against the houseless population in Escambia County. A May 27 Workers World article described the ECSO destruction of at least one homeless camp. The regular police process in the area is that after a homeless camp is set up, police discover it and destroy it, sometimes arresting the people living there.

So it surpised no one (except the ECSO, apparently) that no one, homeless or not, wanted a ride from them. The level of distrust and fear from the homeless population of Escambia County towards the ECSO is deeply rooted, and none knew for sure if they would even make it to the shelter, or be taken to jail for some trumped-up charges.

Instead the people, the masses of Pensacola, everyday workers, jumped into action. Several people risked their own safety driving around the city as the hurricane neared, finding homeless camps and people who were homeless, and offering them rides to the shelters. One such person was Mike Kimberl, homeless rights advocate and director of the Alfred Washburn Center, a homeless day center in Pensacola. Kimberl and many others delivered people to the shelters in the increasingly difficult weather.

At the end of the day, it was the bus drivers and local working class residents who came to the aid of endangered people to bring them to safety.

Many people have lost their homes forever, but hundreds more are now homeless after the slumlords of a low-income complex, Forest Creek Apartments, evicted every single tenant four days after the hurricane. These residents are mostly Black and have been displaced en masse by slumlords using the damage to the apartment as an excuse to kick out residents under the guise of “repairing the apartments.” Workers World Party-Central Gulf Coast is actively involved in the struggle against the evictions.

Another damaging outcome of Hurricane Sally was the destruction of the Three Mile Bridge over Pensacola Bay, which connects Pensacola to neighboring Gulf Breeze and Pensacola Beach, where thousands are employed and live.

Three Mile Bridge was under construction at the time of the hurricane. But barges around the bridge, on which construction equipment sat, had not been properly secured by the barge company. One barge slammed into the side of Three Mile Bridge, causing a complete collapse of a section and rendering the bridge unusable.

Thousands of people now cannot get to work between Pensacola and the beach towns except by an alternate route that adds 25 miles and 30 minutes to their commute. But many cannot afford the additional cost of gas for this route. Because of the corner-cutting and negligence of a construction company, thousands of jobs of low-wage workers are now at stake. There is currently no estimate as to when the bridge will be repaired–effectively making these workers jobless indefinitely.

Capitalism has once again proven its uselessness. Its unplanned economy has left thousands displaced, jobless and homeless in the wake of a hurricane. Residents are told to fend for themselves–or if they’re lucky, go to a shelter, if they can find a way! There they can survive off of crackers and room temperature water for a few days, not knowing if their home is still standing, wondering where to go from there.

Many are forced to return to dilapidated homes overwhelmed with water damage as well as electrical and structural destruction. They have no way to pay for repairs, which will be overpriced after this catatrophe. Credit cards are quickly maxed out, money runs out paying for estimates on repairs and the repairs themselves–and then the house still has leaks in the roof or mold in the walls. There seems to be no end to the horrors of capitalism.

Only there is. The solution to disaster capitalism is socialism, a planned economy that is people-based, people-maintained and people-guided.

A lot of the hurricanes that hit the U.S. also hit Cuba. Yet revolutionary Cuba has bounced back from every hurricane with very little damage and even fewer casualties. The lives of people in Cuba following a hurricane do not come to a screeching halt, as do many in the U.S.

Why is this? Cuba has a planned economy! Cuba has a socialist-directed economy. Cuba puts the needs of the masses over everything else. There are no for-profit industries that overcharge people in need, that take advantage of and exploit the masses. There is no denial of the climate change that is directly influencing the increasingly violent storms around the world.

Hurricane defense in Cuba is viewed as a defense against climate change and as protection of the people. And it works!

It will take something other than texts to your local U.S. senator for a socialist revolution to take place in this capitalist, imperialist, neocolonialist country. It will take the unwavering unity of the oppressed and the workers to rise up and carry out a protracted struggle against the ruling class.

A socialist revolution can lead to a system that is based on the needs of the masses, centered around and led by the most oppressed, and maintained through a planned economy. That is how we fight and that is how we win. And when we fight and when we win, no obstacle, even a catastrophic hurricane, can stop us.

Devin C is a non-binary transgender advocate and member of Workers World Party – Central Gulf Coast. They are the president of Strive (Socialist Trans Initiative), a transgender advocacy organization in northwest Florida.