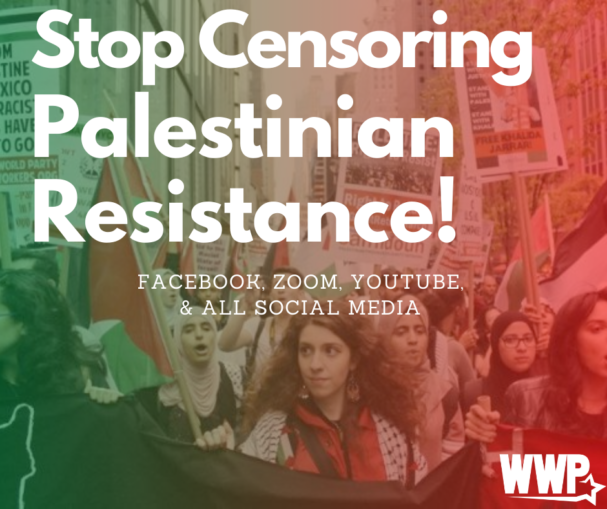 Sept. 23 – Today, three media platforms, Facebook, Zoom and YouTube, collaborated to censor a Palestinian program featuring Palestinian revolutionary Leila Khaled and U.S. political prisoners. Workers World Party condemns this censorship and expresses its solidarity with the struggle of the Palestinian people for self-determination and freedom. The WWP Facebook page is currently threatened with being unpublished because we endorsed this important event.

“Whose Narratives? Gender, Justice, and Resistance: A Conversation with Leila Khaled” was hosted by the Arab and Muslim Ethnicities and Diasporas (AMED) Studies and the General Union of Palestine Students (GUPS), both of San Francisco State University, and other partners within the Palestinian solidarity movement. This event has been under attack by Zionist forces, and yesterday organizers shared that Zoom threaten to cancel the event. The Zoom cancellation came this afternoon along with the Facebook removal of the event page. The event moved to YouTube and was promoted on at least AMED and WWP Twitter platforms before the stream stopped after approximately 23 minutes. The YouTube video has since been removed, saying, “This video has been removed for violating YouTube’s Terms of Service.”

GUPS has released a detailed statement on the event and the attacks on their organization here: https://twitter.com/GUPS_SFSU/status/

Early this afternoon, administrators of the WWP page on Facebook received notice through the “Page Quality” interface that the page was at risk of being unpublished, which sets a page viewable only by its administrators and removes it from being accessible publicly on Facebook. The page is, “at risk of being unpublished because of continued Community Standards violations” and included notification that an event was removed. Page administrators met immediately and determined that the removed event was “Whose Narratives? Gender, Justice, and Resistance: A Conversation with Leila Khaled” that WWP co-hosted.

WWP has shown solidarity with Palestinian activists for decades whether facing occupation in Palestine or oppression in the U.S. WWP has been especially monitoring social media censorship of the left following the U.S. attacks on TikTok, the Facebook takedowns of pages “associated with anarchism” such as Crimethinc and It’s Going Down on August 19, and generally heightened political repression following the arrests of members of Party for Socialism and Liberation in Denver and mobilization of oppressive apparatus prior to today’s announcement that the officers who killed Breonna Taylor in Louisville will not be charged with murder. The WWP Twitter account was previously locked on September 8th but administrators were able to restore access.

Zionist attacks on Palestinians and their allies are nothing new and the expected result of the continued struggle for liberation. The usage of Zionism by corporate or government entities especially within the U.S. to attack left organizations such as WWP is also nothing new, and an important facet of the ruling class alliance between oppressors in Palestine and in the U.S..

Social media is owned and controlled by capitalists to further their own interests, which are in opposition to Palestinian liberation.

WWP will be working closely with the event organizers to determine how best to support the most directly affected people and determine as precisely as possible the nature of the attack and how best to respond. WWP is prepared to mobilize our allies to defend the continued access for WWP and others working toward liberation to these important digital organizing spaces.

In response to the Zoom cancellation, AMED shared a statement on how to follow AMED and GUPS: https://www.facebook.com/AMEDStudies/posts/1281504458868805

According to Samidoun, the Palestinian Prisoner Solidarity Network, video of the event, which still took place and was recorded, will be distributed widely soon.