According to the Belarusian government website, “The leaders of the countries discussed the state and prospects of development of bilateral cooperation in various spheres, the theme of allied relations, considered international problems and the situation in the region, the issues of joint response to emerging challenges” (president.gov.by, Sept. 14).

The two heads of state have had a rocky relationship over the years, but the recent meeting indicates common interest in a time of crisis. Russia promised in mid-August to provide the Belarusian government with military assistance, following the deployment of NATO tanks and planes. (CNBC, Aug. 16) At the same time, Putin stated he wants the current struggle to be handled internally, if at all possible.

Imperialist powers in the West are sympathetic toward the pro-free market, neoliberal opposition, which refuses to accept the election results of Aug. 9, when Lukashenko won roughly 80% of the popular vote. 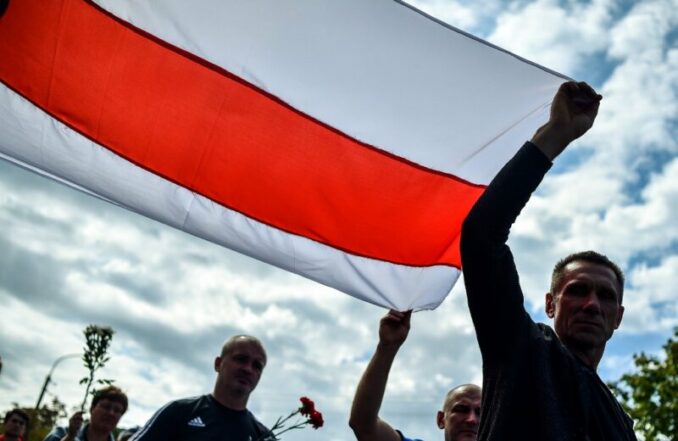 Oppositionists often display the white-red-white flag, which was first used by German occupiers from the Imperial Army during World War I, then by Nazi invaders in World War II and later by capitalist counterrevolutionaries after the collapse of the Soviet Union. The bourgeois media has been busy peddling a demonization campaign against Lukashenko, calling him the “last European dictator,” while blindly praising leaders of the hostile opposition.

What is important for revolutionaries and anti-imperialists to consider is Belarus is the only former Soviet republic able to prohibit corporate investors from stealing its national resources. When imperialists hypocritically label Lukashenko a “dictator,” it has nothing to do with concern for “human rights” and has everything to do with his ability to successfully avoid mass privatization of resources and industry.

Alexander Lukashenko was a member of the Communist Party of the Soviet Union throughout the 1980s. In the mid-1980s, he was appointed director of the Gorodets state farm in the Shkloŭ district of what was then the Byelorussian Soviet Socialist Republic. In 1991, Lukashenko was the only member of Belarus’s parliament to vote against the treaty that dissolved the Soviet Union. (Reuters, Dec. 20, 2010)

Currently, Lukashenko is an “independent,” who does not currently belong to any political party, something extremely uncommon for any political head of state. Nevertheless, he has strong support from the Communist Party of Belarus.

Lukashenko first ran for president of Belarus in 1994 as a proponent of socialism and supporter of the former USSR. Workers and farmers throughout the country embraced his campaign, and he won the election.

The overthrow of the Union of Soviet Socialist Republics was an enormous setback for the global working class and oppressed peoples. Most of the former Soviet republics that border Belarus — such as Ukraine, Lithuania and Latvia — became colonies of the imperialist West and joined the NATO military alliance, as did Poland.

Belarus, on the contrary, maintained public ownership of most of its industry.  Belarus is the only former Soviet republic that still has collective farms and factories.

Because Belarus has resisted a complete counterrevolution, many people believe it is the likely target of another U.S.-NATO sponsored “Maidan coup,” modeled after the 2014 coup in Ukraine. Washington and European NATO powers then helped lead an overthrow of Ukrainian President Viktor Yanukovych, even using neo-Nazi terrorists.

Maidan Square in Kiev, Ukraine’s capital, was the site of anti-government protests in 2014. Behind the coup was a fascist alliance of Ukrainian anti-communist nationalists and white supremacists, who favored an alliance with the imperialist European Union and the United States rather than the Eurasian Economic Union, to which Belarus and Russia both belong.

The Communist Party of Ukraine has expressed solidarity with the Belarusian people and their decision to reelect Lukashenko, writing the following on its website on Sept. 2: “Belarus has followed a unique path of sovereign development for the post-Soviet states, based on the fullest possible use of the existing production potential and relying on the Russian market. President Lukashenko intuitively chose the optimal path, avoiding the extremes of shock therapy, Eastern despotism and colonization by Western capital. He managed to avoid economic catastrophe, systemic corruption, mass capital export and ruin of the country. Thanks to this course, Belarus became the most successful of the former Soviet republics: Real GDP of Belarus for the period 1990-2014 doubled; in Russia — it increased by 25%, in Ukraine it fell by 35% (according to calculations of the World Bank).”

The U.S. and the West endorse Lukashenko’s opposition

The Western and especially the U.S.-based corporate media has tried to portray the opposition protesters — who are backed by the pro-imperialist National Endowment for Democracy — as “progressive.” They don’t emphasize the opposition leaders’ pro-capitalist orientation.

When Western imperialists conduct a demonization campaign against a government they consider an enemy, they often use “human rights” as justification.  U.S. and West European corporate media hypocritically used “women’s rights” as a pretext to criminally bomb Yugoslavia in 1999 and to occupy Afghanistan since 2001. This pretext is repeated today to vilify Lukashenko, since some of the opposition leaders are women.

This campaign omits the following truths: Women in the U.S. are not guaranteed maternity leave, but in Belarus, women are paid 70 days prior to giving birth and 56 days afterwards. Childcare leave can be taken for years following birth. (Reuters, March 6, 2019) Maternity leave and childcare in Belarus are just a couple of the many examples of Soviet-era practices that still exist in that country.

It’s in the United States where access to abortion is under constant attack and women are paid less than men for the same work. Atrocities, like the hysterectomies forced on immigrant women in detention camps, can occur.

Belarus has its fair share of contradictions. But despite suffering a pro-capitalist counterrevolution briefly in the early 1990s, from which it never fully recovered, Belarus has the most centrally planned economy in all the former Soviet republics.