National Nurses United (NNU) called it the “largest hospital union victory in the South since 1975.”  On Sept. 16, in a National Labor Relations Board election, RNs voted by more than 70% to unionize Mission Hospital in Asheville, N.C. — one of the most anti-worker states in the U.S. 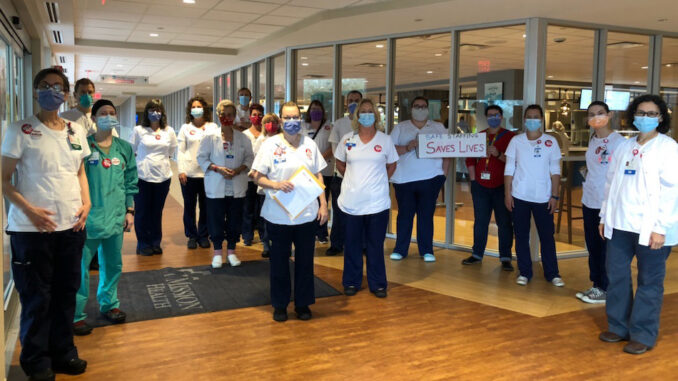 NNU is a militantly anti-racist union engaged in working class struggle around the U.S., but especially in the South, including workplaces in North Carolina, Florida and Texas. NNU fights to orient health care workers in the quantitatively most productive sector of the U.S. economy toward aligning with working class and oppressed people, rather than with capitalist interests. NNU has been on the frontlines against the COVID-19 pandemic from the outset.

“Throughout the entire campaign, we’ve been acutely aware that this fight isn’t just for us and our working conditions — this is about the health and well-being of our community,” said Kelly Graham, palliative care RN, in an NNU press release. On Sept. 16, Graham and the NNU won for their community.

The significance of this victory as the largest Southern union win since 1975 is related to events in North Carolina in 1979, when rank-and-file workers and the Communist Workers Party were organizing textile mills in Greensboro.

On Nov. 3 that year, the Ku Klux Klan killed CWP organizers and allies Dr. James Waller and Dr. Michael Nathan — two medical doctors, William Evan Sampson, Cesar Cauce and Sandra Neely Smith, a nurse and former student body president of Bennett College, which is one of only two historically Black colleges for women. Also involved in the murders were members of the American Nazi Party and various federal and local law enforcement agencies.

The impact of these murders was, and still is, incalculable in North Carolina. Every day of struggle for Black liberation and worker power in the state since then has taken place in the context of the horrific attack.

The successful union drive in Asheville over 40 years later testifies both to the power of solidarity and to the harsh conditions for workers in North Carolina and throughout the South.

A victory against systemic white supremacy

White supremacy pervades every aspect of life in the U.S., but rarely is it more obvious than in corporate medicine, where racial disparities in outcomes are often worse than in education or even in the so-called justice system. Throughout North Carolina, Black, Indigenous and/or Latinx people have lower life expectancies and birth weights, higher COVID-19 infection rates and death rates, and higher rates of poverty as a result of medical expenses, compared to workers who are not nationally oppressed.

HCA Healthcare, the largest U.S. for-profit health care company, owns Mission Hospital in Asheville and waged a vicious anti-union campaign against NNU. But HCA’s program of white supremacist health care was defeated. Its stock prices have been falling since the results of the union vote were announced.

A union is the most powerful tool available to empower workers of all nationalities to recognize their shared interests with the communities they serve and oppose white supremacy advanced by bosses and shareholders.

The Southern Workers Medicare for All Campaign, launched by NNU and sibling radical unions UE (United Electrical, Radio and Machine Workers) and International Longshore Association Local 1422, has built a powerful movement throughout the South. NNU has shown the power to make demands of HCA and others who prevent equitable provision of healthcare. (tinyurl.com/y2noo6fa)

There is profound power in recognition by NNU that health care is a service provided by workers, for workers, and that reactionary governments and private industries only serve to harm workers and to bankroll billionaires.

The victory in Asheville shifts the balance of power closer to justice.

On Sept 13, the Southern Workers Assembly heard from Mission Valley nurses and other health care workers during the “Safe Jobs Save Lives” webinar. These workers are engaged in many different fights to demand safety for workers and patients, as well as to dismantle the broken U.S. for-profit health care system and replace it with Medicare for All. View the webinar at tinyurl.com/y5uffz9c.