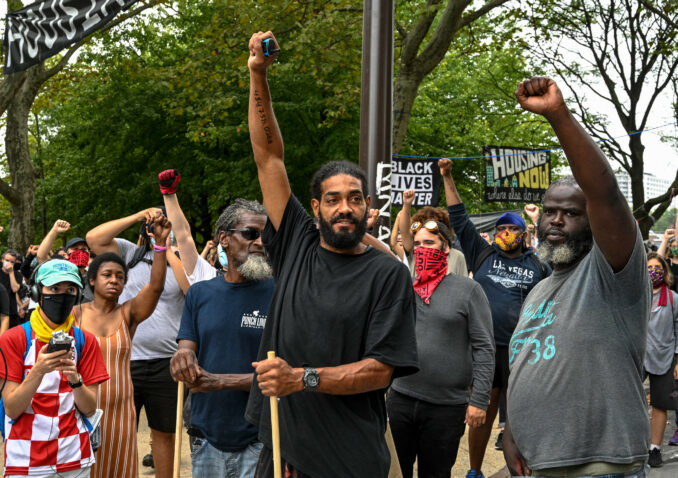 Sept. 14 — For over three months, “BLACK LIVES MATTER” was shouted in hand-painted white letters across a massive banner on 21st St. at the Benjamin Franklin Parkway, near the steps of the iconic Art Museum of Philadelphia.

A tent city, whose population steadily grew all summer, stretched below the banner.

The people who lived right there on the street tied the banner to light poles after rebellions rose up across the U.S. when police murdered George Floyd May 25. Philly police then tear-gassed peaceful protesters twice in two days, and protesters burned cop cars.

Members of the city’s homeless and unhoused community began on June 10 to set up their tents at a deserted baseball field in the shadow of high-rise luxury condos and museums of high art. They pitched tents on the lawn of the Auguste Rodin Museum, the largest collection of the works of that sculptor outside of France, and just across the street from the Albert C. Barnes Museum, which houses a collection of paintings estimated to be worth over $25 billion.

A fierce thunderstorm ripped the Black Lives Matter banner from its tethers a month ago. But the residents remain, after nearly 100 days, in the tent city named Camp James Talib-Dean, in honor of an organizer who died in June.

Project Home estimates over 6,000 people now experience homelessness in Philadelphia. On any given night in the U.S., over half a million people are without housing, with one-third having no shelter at all. Philadelphia’s 27% poverty rate has made it the poorest major city in the country for nearly a decade.

Since 2000, Philadelphia has lost at least 20% of its affordable housing. In 2017, Philadelphia had the highest home foreclosure rate in the country, twice the national average. One out of every 100 homes was seized by the banks or the state.

“Philadelphia has been victim of a predatory housing market, of redlining, of discrimination, of racial injustice, of police violence, of state violence, of neglect, of abuse, of mismanagement for generations. And the people have resisted for generations,” encampment organizer Tara said at a recent press conference at Camp JTD. She added, “We have been fighting for access to housing for low- and no-income Philadelphians for a long time, and we are not going to stop until we get it for every one of us.”

Jennifer Bennetch is a lead organizer of a second encampment, Camp Teddy, located in front of the Philadelphia Housing Authority headquarters, just a mile and a half north of Camp JTD. She sees the city’s paltry attempts to “provide services” to residents at both camps as its preparation for eviction. “We barred homeless outreach precisely for this reason.”

During a press conference last week after police threatened another eviction, a small group of clergy members arrived in a police van. Escorted by a phalanx of both uniformed and plainclothes Civil Affairs cops, the clergy members approached the barricades and attempted to interrupt the press conference. Speakers turned them away and chastised them for interrupting, noting that no member of this delegation had visited the camp before. 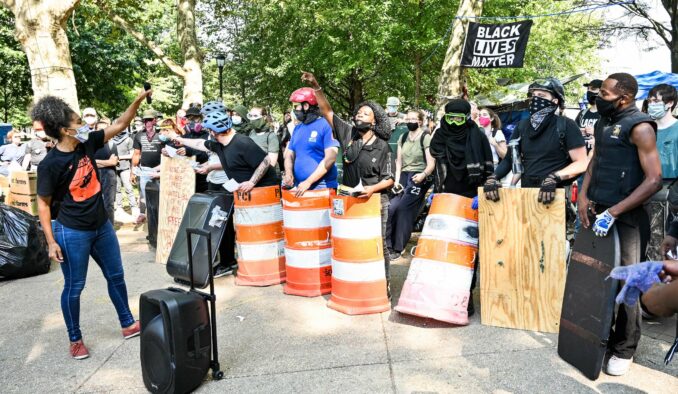 Activist Samantha Rise speaks as others hold makeshift shields to protect the encampment on Aug. 18.

This prompted Mayor Kenney to charge encampment residents with “threatening violence.” And later he even alleged they were stockpiling “weapons.” He has also claimed that the encampments no longer shelter unhoused residents but are filled with “protesters and outside agitators.”

“If there are no homeless people left,” asked Bennetch sarcastically, “why do they keep coming here with homeless outreach services? The City just wants to protect the criminal enterprise that is the Philadelphia Housing Authority.

“The Mayor and the Democratic Party of Philadelphia are directly responsible for this crisis, due to their actions and inaction. . . . Democratic officials want to spread misinformation about us, when they’re the same ones who cry about the Republican Party and the Trump cabinet spreading disinformation and fearmongering.”

Anthony Lloyd, an unhoused activist and formerly incarcerated worker, said, “I represent a percentage of returning citizens. I represent a percentage of people who suffer from mental health problems. We’re not just fighting for homes for the people that live out here, we’re fighting for homes and equality for everybody in Philadelphia.” He said the elected officials have abandoned them.

“When you deprive people of housing, we become ‘savages’ by circumstance. This is minuscule to what they really owe us! If they can take everything from us, what’s gonna stop them from taking it from y’all, the moment you can’t pay your bills?”

Another resident of Camp JTD is Tata Scott. “My brothers and my sisters, they don’t have nowhere to go,” she said. “I’ve experienced homelessness on and off for four years. What are we doing that’s so wrong? Are we invading y’all homes? . . . They have to wonder when they gonna eat, where they gonna sleep, how they gonna properly use the bathroom.

“This is evil. And it has to stop. . . . There’s elders out here. There’s veterans that fought in the wars. What about them? What about the families? What about the pregnant women? What about all of us? We want to be seen, too! . . . We got homeless people. We got LGBTQ. You got the whole m-f-ing nation out here. . . . Please be brave enough to fight with us — to defend us. Because we’re not going anywhere.”

‘We are gonna fight’

Workers World Party member Mike Wilson has spent over 40 consecutive days at Camp JTD assisting residents and organizers. “The measure of any society, for what it’s truly worth, is how they treat their weak and vulnerable,” he said. “We want the mayor to hear this very clearly from us. We’re gonna fight for housing. And we’re gonna take housing.”

The Kenney administration claims that vacant “affordable” housing units are being fixed up for people who are “fit” to live in them — but not Camp JTD residents, who suffer from addiction and mental illness.

Wilson says those having addiction or mental illness still qualify for the right to permanent housing. Further, the city has absolutely failed to provide these people with the services they need. That means people must take it upon themselves to acquire the properties withheld by the city.

Residents and organizers have repeatedly said that they will take down all the barricades defending the entrances to Camp JTD, when the mayor calls off the cops and stops threatening forcible eviction. Organizers went so far as to invite Kenney to brunch at a Sept. 11 press conference.

YahNé Ndgo of the Black Alliance for Peace urged the mayor to meet with residents: “Mayor Kenney . . . talk to your constituents. The individuals who are down here are individuals who you have a responsibility to.”

“We are the ones who are willing to negotiate,” said Dominique, the lead organizer at Camp JTD. “He is the one who is not listening . . . who is continuing terrorizing us. I don’t know what else to say. We asked him to acknowledge us, and he said, ‘The police are coming.’”

All weekend, another banner has flown at the corner of 21st street. It reads, “Dear Mayor Kenney: You’re cordially invited to Brunch & Conversation @campjtd on Monday 9/14 @ 11am. No Violence. No Barricades. All Solution. RSVP (regrets only).”

The night before camp residents’ scheduled brunch meeting with Mayor Kenney, police in nearby Lancaster, Pa., shot and killed a man who was diagnosed as having autism. His body lay on the street for four hours, before it was finally retrieved by the coroner.

By noon Monday, it was clear Mayor Jim Kenney was not going to show.

Another resident of Camp JTD shook his head and murmured, “City of Brotherly Love.”

Tata replied, “City of Brotherly Love is a bunch of bullshit, and y’all know it.”