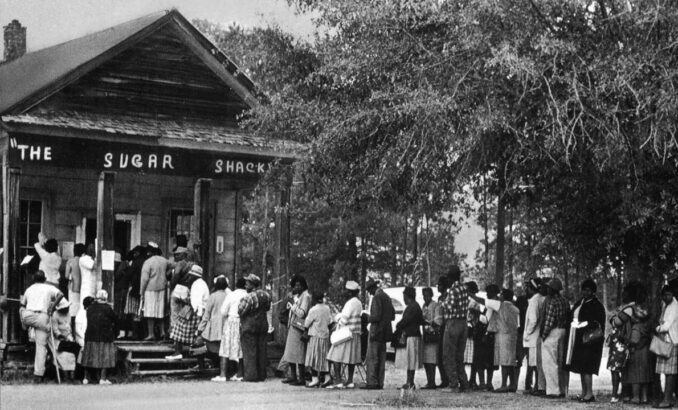 Voter suppression in the United States is as “American as apple pie,” especially when it comes to Black, Brown and other marginalized communities. Despite the passing of the Voting Rights Act some 55 years ago, current and former prisoners convicted of a felony may lose this right forever in the state of Florida.

On Sept. 11, the U.S. Court of Appeals for the 11th Circuit in Atlanta ruled that, to meet their “terms of sentencing,” former prisoners in Florida must pay certain “fees” and “fines” as a prerequisite to regain their right to vote. The state’s Republican-controlled Legislature, under the leadership of Gov. Ron DeSantis, also a Republican, had imposed the onerous terms.

Vice President Paul Smith of the Campaign Legal Center says that “Nobody should ever be denied their Constitutional rights because they can’t afford to pay fines and fees.” (Washington Post, Sept. 11) It is not yet clear whether this reactionary decision will be appealed to the U.S. Supreme Court.

In 2018 more than one million prisoners saddled with felony records had their right to vote restored in Florida through the passage of Amendment 4 to the state’s Constitution. It was passed by an overwhelming 64 percent of the voters, the majority of them white.

The recent ruling, however, will negatively impact hundreds of thousands, including Black lives in hugely disproportionate numbers. In Florida the deadline to register to vote in the 2020 presidential elections is Oct. 5, less than a month away.

In 2016, one out of every five Black people was denied the right to vote in Florida through use of 150-year-old laws passed even before Reconstruction ended.

Voter suppression: a form of semi-slavery

The suppression of the right to vote has its roots in slavery and Jim Crow. After the U.S. Civil War, “Black Codes” were passed by former Confederate states in 1865-1866. These “Codes” denied newly freed people economic and political rights, including the right to rent, lease or own land, the right to vote, the right to education, the right to serve as jurors and the right to bear arms. These codes were the precursor to later “Jim Crow” segregation laws.

In the powerful 2014 movie, “Selma,” Oprah Winfrey portrays an elderly Black woman attempting to register to vote in Selma, Ala., in 1965, shortly before the historic Selma to Montgomery March known as “Bloody Sunday.” The racist registrar demands that Winfrey’s character answer certain questions about the state’s history in order to gain that right. These obscure questions that white registrants would never be asked were designed to “legally” fail Black applicants. Unable to answer the questions, Winfrey’s character walks away, dejected and disgusted.

This was a powerful depiction of one tactic used to deny Black people the right to vote under Jim Crow. Other tactics used to suppress the vote were laws requiring people to pass a literacy test and to pay a poll tax. During this period, many Black people, especially in the rural South, were illiterate due to unequal education and could not afford to pay a poll tax due to dire impoverishment. Even after passage of the Voting Rights Act in 1965, Alabama still denied Black citizens the right to vote until restrictive state laws were struck down in 1966.

As oppressive as these laws were, the most devastating laws still exist today: those that deny the right to vote to prisoners and former prisoners convicted of a felony.

These restrictive laws are in a direct line from a new form of slavery created after Emancipation in the South. Newly freed people were forced to enter “labor” contracts with former plantation owners and were legally forbidden to work for more than one “employer.” If they broke these contracts, Black people could be beaten, arrested and fined for “vagrancy,” a term defined so broadly that any Black person could be arrested at almost any time. In 1865, Florida passed “Black Codes” targeting freed Black people with absurd charges, including assault on a white woman and “disobedience.”

The fines for such trumped-up charges were exorbitant, meant to be unpayable and to turn arrests into long prison sentences. The imprisoned Black people then became cheap “convict labor” hired out to plantation owners for minimal wages – that were paid not to them but to the state.

This is the white supremacist legacy of what it means to be stigmatized as a “felon” today.

There is no federal law that uniformly restores the right to vote to disenfranchised people. Two states have permanently banned the right to vote to convicted people: Kentucky and Virginia. Maine and Vermont, the only two states that have no voting restrictions, also allow voting in prison. All other states have their own rules and regulations to restrict voting rights. These range from restoration upon completion of sentencing or after certain waiting periods to the currently passed Florida law demanding payment of exorbitant fines before the right to vote is regained.

Workers World Party demands that all prisoners and former prisoners, regardless of convictions, have access to the basic democratic right to vote – as well as im/migrants, documented and undocumented, youth and other disenfranchised communities. This right must be defended in order to build anti-racist and pro-worker solidarity to fight capitalist rule.