Sept. 13 – Nearly six months ago, Daniel Prude was murdered by police officers in Rochester, N.Y., while experiencing a mental health crisis. Initially, the details of the case were swept under the rug by Rochester Police Chief La’Ron Singletary and Mayor Lovely Warren. However, on Sept. 2, body camera footage of the murder of Daniel Prude at the hands of Rochester Police Department became publicly available.

The same day the family of Daniel Prude called a press conference to share the gruesome video and details of the cover-up by RPD with the community. Joe Prude, the brother of Daniel, condemned the police action, declaring it a “cold-blooded murder.”

On Sept. 2 and on following days, large numbers of protesters assembled at Rochester’s “public safety” building, demanding justice for Daniel Prude. On the first day, protesters were arrested for attempting to enter the building where the mayor was holding a press conference. On the second night, the police responded with force, beating people with batons and shooting pepper balls into the crowd. Pepper balls are a glass ball filled with pepper powder, lightly coated in plastic, which can cause serious permanent injury or even death.

The next few days saw protests growing larger as more community members, saddened by the loss of another Black man murdered by police and enraged by RPD’s reckless disregard for human life, joined the marches. By the weekend, demonstrations had grown to over 1,000 people. Often beginning at MLK Park, protesters sang and chanted “Out of your houses, into the streets!” and were met with love and support from the neighborhood.

At this writing, protests have been ongoing for 11 consecutive days. Rochester had already seen regular protests weekly since the murder of George Floyd by Minneapolis police. Members of Workers World Party’s Buffalo branch – only an hour away – have been on the ground to demonstrate their solidarity in their neighor city’s struggle against police violence. 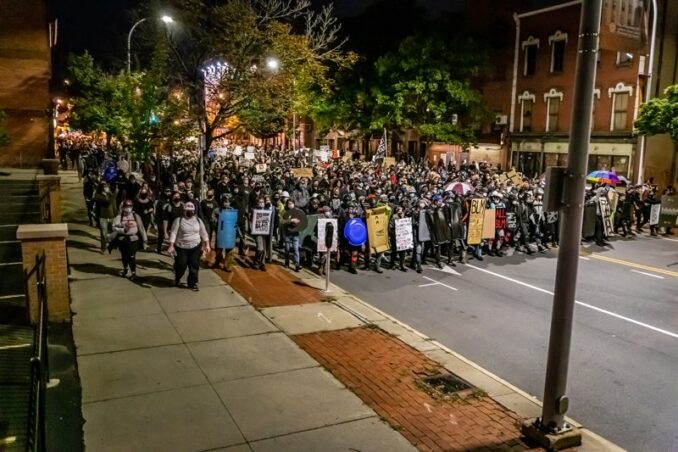 Marching for Black lives in Rochester, N.Y., during September protests.

Every day, the people of Rochester are posting new first-hand images of their injuries at the hands of police. Many people have been shot point-blank with pepper balls, some even being shot directly in the face and eyes.

Police have brought out dogs and deployed flash-bang grenades and tear gas, as well as an LRAD Sound Cannon, a sonic weapon police use to disorient protesters. Protesters are armed with little more than water bottles and umbrellas for protection. Most people are attacked by police without a clear reason, and many shot at while running away and attempting to disperse. Police have circled the city scooping up fleeing people, making opportunist arrests of unlucky people they come across. Some protesters report being covered in pepper spray, shackled and locked in a police van for an extended period of time.

One person present at a protest, Roderick Douglass, said of his experience being abducted and arrested by police: “I was the first person arrested and one of the last unshackled and released after more than four hours. I wasn’t alone. Shortly after my arrest, a close comrade and roughly a dozen others were taken into custody. None of those arrested were ‘rioting.’ None were throwing bottles. We were on the front lines attempting to keep people safe and calm.

“We were using our bodies to shield vulnerable people from the onslaught of rubber bullets and pepper balls being launched into the crowd. All of us were shot at close range multiple times before being abducted. Our bodies were covered in fresh welts and bruises, many of us bleeding. At least one man was shot in the eye.”

Douglass explained the excruciating conditions arrestees were subjected to after the arrests: “Three more hours passed. We were handcuffed behind our backs the whole time. Numbness and agony set in. Your shoulder blades burn. Your wrists bleed. You’d give just about anything for the ability to get blood flow to your limbs. Cramping set in due to the dehydration. No water. Covered in pepper spray. Everyone wincing in pain. This was our punishment for the sin of trying to protect people.” (Roderick Douglass on Facebook)

During the protests, the police specifically singled out street medics, firing tear gas and pepper balls as they attempted to treat injuries and rescue incapacitated individuals. One anonymous street medic recalled the deliberate targeting of medics by police: “When we were being pushed back into residential neighborhoods, there was someone who had been shot point-blank in the eye with a pepper ball. My medic buddy and I were trying to treat the person and get them to safety, when two RPD cowards snuck out from behind a building and fucking sniped me. They were aiming right at us. I got clapped in the hand by one pepper ball, and a whole bunch popped off around us, separating us from our other medics, who were helping the injured person. This is not a new tactic for the police, they’ve historically targeted medics, but we are ready for it.” (posted on Facebook)

At one point on Sept. 5, police surrounded United Downtown Presbyterian Church, trapping people inside and firing pepper balls at the building. The church was being used as a safe place for people to get away from the violence. Pepper balls could be seen splattered on the side of the brick wall the next day.

As well as the overwhelming threat of police assault, attacks from the far-right were also a safety concern. On Sept. 4, two cars drove through the crowd of protesters, hitting one person. Bear mace was sprayed onto dozens of people by someone inside the vehicle. Luckily, street medics were on site to assist, and no serious injuries occurred. Rumors of other fascists in the area continued in social media over the next few days, keeping protesters vigilant.

In the wake of the popular demonstrations, on Sept. 8 Police Chief Singletary abruptly retired and the entire command staff resigned. Some may view this as a final victory, but most of the protesters understand the problem lies in the racist foundations of policing as an institution, rather than a few “bad apples” or inadequate leadership of RPD.

Protests have continued despite the resignations, and people have consistently advocated for defunding and abolishing the police.

A list of demands compiled by Free the People Roc, a group focused on defunding the police and abolishing the prison-industrial complex, has been popularly adopted by many people in the city since the protests for George Floyd. Those demands include dropping all charges brought against protesters since May 30, defunding police, paying reparations to people and their families who’ve been impacted by police brutality, ending mass incarceration and surveillance, and cancelling rent and reinvesting funds from RPD to provide needed housing.

Other demands arising since the murder of Daniel Prude include firing and prosecuting the officers involved, prohibiting RPD’s use of military-grade weapons, passing legislation prohibiting police from responding to mental health calls, and the resignation of Mayor Lovely Warren and Deputy Mayor James Smith.

Some demands have already been won, such as the repeal of Section 50a which had kept police disciplinary records hidden, making the police somewhat more accountable to the community. Another victory was the removal of RPD officers from Rochester City School District, a significant step towards fighting the school-to-prison pipeline and for the abolition of the prison-industrial complex.

Of course liberation will never be granted through the courts, it must be fought for in the streets. The decisive factor in maintaining these smaller victories will be whether or not the people can gain and keep control over the streets, and keep collective pressure on the police and city government.

With each protest day, the protesters grow smarter and become more well organized. Despite heavy police repression and many injuries and arrests sustained in the fight for Black liberation, the people are resilient and remain dedicated to their cause. They have seen the protests in Portland going on for over 100 consecutive days and know that this fight is a long haul.

The great revolutionary Fred Hampton once said, “Everything would be alright if everything was put back in the hands of the people, and we’re going to have to put it back in the hands of the people.” Workers World Party is with the people of Rochester and oppressed people across the world struggling for national liberation. We echo the call for defunding and abolishing the police, rent cancellation and dismantling the prison system.