Bulletin: The United States Court of Appeals for the Ninth Circuit ruled Sept. 14 against TPS recipients, holding that President Trump can terminate the legal status of people of all countries now living in the U.S. under protection of the program. The ruling leaves hundreds of thousands vulnerable to deportation.

On Sept. 21, im/migrant activists will depart Los Angeles for San Francisco, the first of 54 stops across 32 states on the #TPSJourney4JusticeII bus tour, ultimately arriving in Washington, D.C., in mid-November. 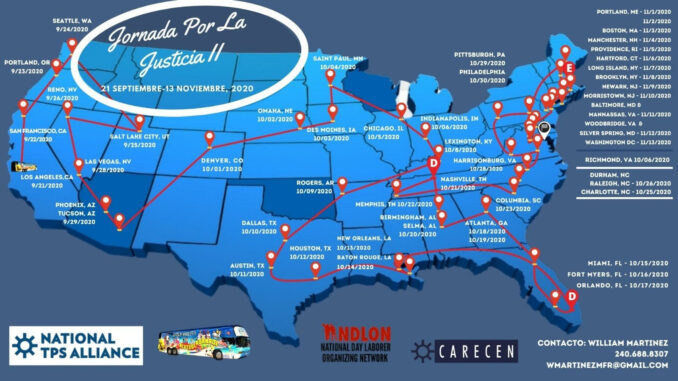 For caravan map and information about Journey for Justice, go to www.nationaltpsalliance.org/journey-for-justice/.

In 2018, the first Jornada por la Justicia calling for protection of Temporary Protected Status (TPS) recipients crisscrossed the country after Trump terminated the program. TPS is now set to end after Jan. 4, 2021, for 411,000 recipients who will then lose legal work authorization, driver’s licenses (in most states) and protection from deportation. (nationaltpsalliance.org)

In June, the intensifying #ResidencyNow fight drew a caravan of over 200 cars to D.C. Amidst the Black Lives Matter rebellion and COVID-19 pandemic, the summer mobilization centered the multinational unity of the Black and Brown TPS community and their contributions as essential workers.

“We want to be legalized,” Massachusetts activist Julio Perez told Workers World. “We have been living legally in the U.S. for 20 or more years and gotten nothing, so we also empathize with the 12 million undocumented in this country.”

Perez will drive the 13,000-mile Journey for Justice II route, designed by the National TPS Alliance, National Day Laborers Organizing Network (NDLON) and Central American Resource Center (CRECEN). The 300 hours of driving will cost him all his vacation time, plus eight weeks unpaid leave including two in quarantine, before returning to work as a custodian at Harvard University. Recognizing the urgency of protecting large numbers of members, Perez’ union SEIU 32BJ negotiated the time off.

TPS workers have already paid their dues to the U.S. Elmer Romero, Director of Strategic Partnership for CRECEN, organizing in Houston’s Salvadoran community with well over 36,000 TPS-holders, explained to Workers World, “The COVID-19 pandemic has demonstrated that the TPS community is composed of essential and necessary workers to sustain and serve the economy of our nation. It is an immoral and inhumane act to deny a legal immigration status to the people who take care of us and feed us.”

U.S. residents are eligible for TPS, if their nation of origin becomes unsafe due to disaster or violence. Like Deferred Action for Childhood Arrivals (DACA), it temporarily protects recipients from removal. TPS is not a path to citizenship, although many recipients have 20-plus years of 18-month extensions. TPS recipients have 300,000 U.S.-born children.

TPS was a concession to 1980s Salvadoran activists who fled the right-wing dictatorship, which President Reagan was financing with over $3 million per day in today’s dollars. A majority of Tepesiana/os — the Spanish-speaking recipients’ word for their status — are Salvadorans who arrived after the 2001 earthquake there.

U.S. interventions in Honduras and Nicaragua also heightened the devastation of Hurricane Mitch before those countries were designated. The U.S. has forced debilitating debt onto Haiti for two centuries. ICE detainees are also disproportionately Haitian.

No disaster is entirely “natural” in countries destabilized by U.S. intervention. U.S. and British imperialism reduced Nepal to “one of the poorest countries on the planet” before its 2015 earthquake. (Workers World, April 28, 2015) Various “pretexts … cover for U.S. imperialism’s geostrategic and economic interests” in the Horn of Africa and the Middle East as well. (Workers World, April 2, 2019)

Decades of immigration policy shifts mirror capitalism’s instability. Im/migrants keep the U.S. economy humming, when business is booming. Immigration to escape the aftermath of U.S. policies is encouraged; the exodus neutralizes the threat posed by revolution developing after a disaster. In downtimes, the ruling class swerves the other way — cutting workers.

Many Black and Brown union leaders, who are revitalizing the U.S. labor movement and benefiting everyone, have TPS. Cancelling TPS is union-busting, purging leaders to undermine resistance to the next attack — whether it’s unemployment, right-to-work or unsafe reopening. Wall St. is the beneficiary.

As the attacks inspire militant activism, #SaveTPS has given way to the all-inclusive call for #ResidencyNow. Doris Reina-Landaverde, a national TPS and SEIU leader like Perez, a Harvard custodian in Massachusetts, told Workers World: “We don’t want to save TPS. We want permanent residency. When we fight, it’s for everyone now and all the people who come in the future. It’s what we need for our families. It’s not about saving — it’s about fighting.”

G. Lechat, Boston, an activist with FIRE (Fight for Im/migrants and Refugees Everywhere), is a co-founder of Harvard TPS Coalition, a joint effort between the University’s workers from SEIU 32BJ, UNITE HERE Local 26 and AFSCME Local 3650.

Gloria Rubac, Houston, an activist with FIRE, is one of the founders of the South Texas Human Rights Center in Falfurrias, Texas, working to save migrant lives at the U.S./Mexico border.