Below is a lightly edited version of a talk given by Joe Piette on the Sept. 3 Workers World Party webinar: “Save the people’s post office.” 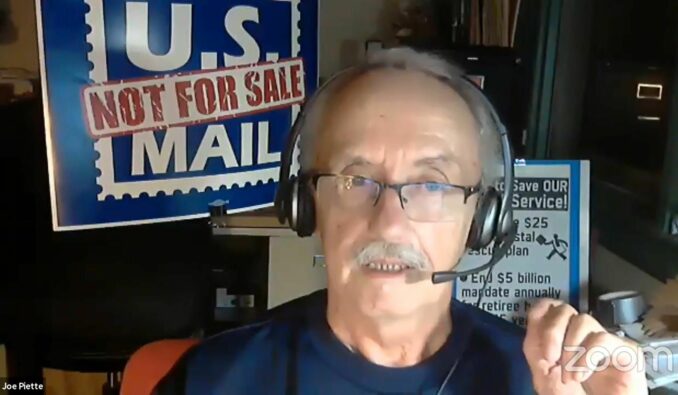 The pandemic was the trigger that began the current crisis for the post office. It caused financial harm to the U.S. Postal Service (USPS), but, more importantly, it put essential postal workers in harm’s way. Over 80 postal workers have died, and tens of thousands have been exposed to COVID-19.

On the job, the demands for masks and other personal protective equipment, deep cleaning of postal facilities and social distancing are still recurring demands six months into the pandemic. Forcing supervisors and managers to wear masks, and to enforce rules requiring all workers to wear masks and use social distancing, are still issues which many shop stewards and union officials are fighting for.

Congress approved half a trillion dollars to rescue capitalist corporations from pandemic-related financial losses but has refused to give aid to the people’s postal service to get past this crisis. Remember the slogan: “Banks got bailed out; we got sold out” after the Great Recession? It’s still true today.

The USPS needs legislation passed in the House and Senate, based on H.R. 8015, to provide $25 billion in direct emergency relief. With USPS forecasting COVID-related losses of up to $50 billion over the next decade, Congress should not settle for the scaled-down Republican proposal of $10 billion in aid. (inequality.org)

The second necessary demand is to rescind the 2006 bill that requires the Postal Service to put aside over $5 billion annually to pay for retiree health benefits — 75 years into the future. No other company or federal agency has that requirement. That requirement must be ended immediately.

After a lot of protests, DeJoy announced he would put a stop to his harmful policies, but he refused to bring the sorting machines and blue collection boxes back. And postal workers say work rules are still not the same as before DeJoy took office.

After the elections, no matter who wins, we ask all postal service supporters to pay attention and come out to oppose any new rules DeJoy imposes that will harm the right of everyone to affordable, universal mail delivery.

Thousands of phone calls and signatures on petitions have demanded DeJoy be fired. In a new poll, 56% of respondents — including 77% of Democrats, 49% of Independents and 39% of Republicans — strongly or somewhat support DeJoy being removed from office. (tinyurl.com/y4ztq25s)

On the “Save Our Postal Service” facebook page, you can get information on how to contact members of the Postal Board of Governors. That’s the Board who appointed DeJoy, and they have the power to fire him.

During this pandemic, it hasn’t been easy organizing postal workers. They’ve been working 12-hour days. Many have been exposed to COVID-19 and have had to self-quarantine. As with everything else, there haven’t been union meetings, because of social spacing requirements.

Nevertheless, protests have taken place, thanks to the solidarity of other workers and members of the public. On Aug 22, over 800 protests took place across the U.S. to support the people’s postal service. The majority of those protesters were not postal workers. That is real solidarity!

Solidarity is not a one-way street. On June 25, postal workers marched for Black Lives Matter in Minneapolis. That’s solidarity too.

This year, “an injury to one is an injury to all” should be our everyday slogan. In solidarity in the streets is where we need to be.

Piette is a retired letter carrier and member of the National Association of Letter Carriers.