The Service Employees Union (SEIU) is one of the largest labor unions in the U.S., representing approximately 2 million employees in this country and Canada. But as with many large unions in the U.S., where internal colonization is the de facto way of life for the tens of millions of nationally oppressed workers, it has been fused to the carceral state by “unionizing” police, prison guards and parole and probation officers. 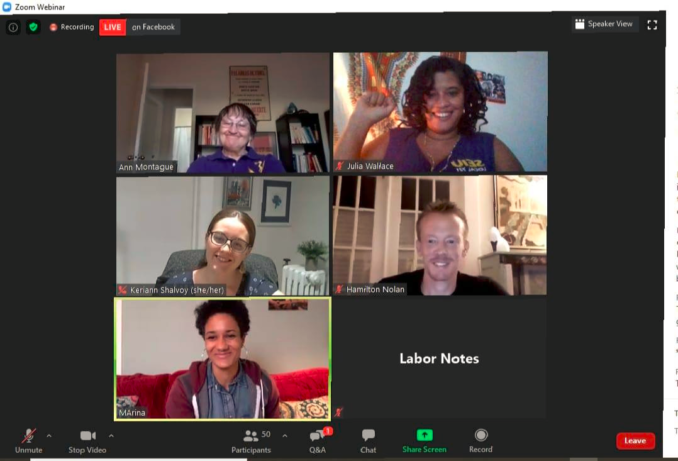 The four panelists and chairperson in the webinar. Credit: SEIU Drop the Cops

However, there can be no union for police — who are not workers. A rank-and-file campaign within the SEIU, called “SEIU Drop the Cops,” formed earlier this year.  It has set forth demands for the union and begun a union-wide organizing campaign of its rank and file.

On Aug. 30, SEIU Drop the Cops held an online forum to set forth their vision of a union that reflects its promise of being of, and for, workers. (View at facebook.com/SEIUDropTheCops.) Marina Stankov-Hodge, an SEIU nurse, chaired the event.

Wallace is a rank-and-file member of SEIU Local 721. She passed disaffiliation resolutions in the Black and Latino caucuses of the local, prior to building toward the union-wide campaign. She presented SEIU Drop the Cops’ demands before providing a class analysis rooted in the struggle for Black liberation. She spoke of the moral imperative, which unionists in SEIU have as workers, to expel any cop bargaining units.

Following Wallace, Ann Montague from Local 503 in Oregon, also an SEIU Drop the Cops organizer, shared the lessons from her local: “I have been a rank-and-file member of SEIU 503 for over 20 years. I knew my local had armed Portland State University (PSU) cops, but when I read in the New York Times that the cops who shot Rayshard Brooks in the back were ‘represented by SEIU,’ I realized how prevalent cop unions are in SEIU, and I joined Drop The Cops.”

As an SEIU rank-and-file worker, Montague was part of the Disarm PSU struggle to oust cops from the bargaining unit — and off the campus. She shared how after seven years of struggle, Disarm PSU recently won both demands: to disarm campus cops and to expel them from the workers SEIU bargaining unit — showing their power.

Keriann Shalvoy, a member of the Committee of Interns and Residents/SEIU Healthcare, addressed internal organizing within the union. Hers is the largest house-staff union in the U.S., representing over 17,000 interns, residents and fellows across the country. She has been a delegate in CIR for two years and is running for national president under the progressive slate “Housestaff for a Democratic Union.”

Shalvoy said, “We resolved, as CIR, that SEIU should disaffiliate from police and other unions representing repressive workplaces like ICE (Immigration Customs and Enforcement), Border Patrol and corrections officers.” CIR resolved not to allow political funds to support candidates who work with police “unions” or fund policing, similar to the demand of “No cop candidates.”

Workers have raised the same demands throughout the SEIU, demonstrating their political clarity and the urgency of the demands.

The final panelist was Hamilton Nolan, a labor reporter with In These Times and a council member at the Writers Guild of America East, an AFL-CIO affiliate. He helped get the Council of the WGA to unanimously pass a resolution calling on the AFL-CIO to disaffiliate with the International Union of Police Associations. (wgaeast.org, June 8)

The International Executive Board of the SEIU passed a resolution on June 12 aligning with the movement for Black Lives Matter. It includes a call to “divest from and demilitarize the police and invest in and build Black communities,” for “dialogue to reimagine the role of police and the criminal justice system,” and further declares “corporations must be held accountable for investing in our communities.” (tinyurl.com/y6ra5eyh)

Nolan said SEIU President Mary Kay Henry told In these Times on June 19, “We have to consider expulsion of police unions from the labor movement.” (tinyurl.com/y2nxbl4j) He noted that promised next steps never materialized.

Nolan urged SEIU workers to push the issue at all levels of the union, to pressure officers and workers to take a position on expelling the police and simply to learn where they stand.

Panelists then took questions from SEIU workers. Over 100 workers attended, and the SEIU Drop the Cops Facebook page says it has had over 2,000 views.

While much work remains for the campaign, one thing is clear. It is time that SEIU drop the cops! When workers fight, they win!

The writer is a member of Workers United Southern Region of the SEIU, Local 32, in Chapel Hill, N.C.