With more than 100 million monthly users in the U.S., nearly 70% of whom are ages 13-24, TikTok has quickly become a wildly popular, short-video social media app. Owned by Chinese corporation ByteDance Ltd., TikTok is the sixth most popular social media app worldwide, according to usage statistics compiled in January of this year. (hootsuite.com, May 7) 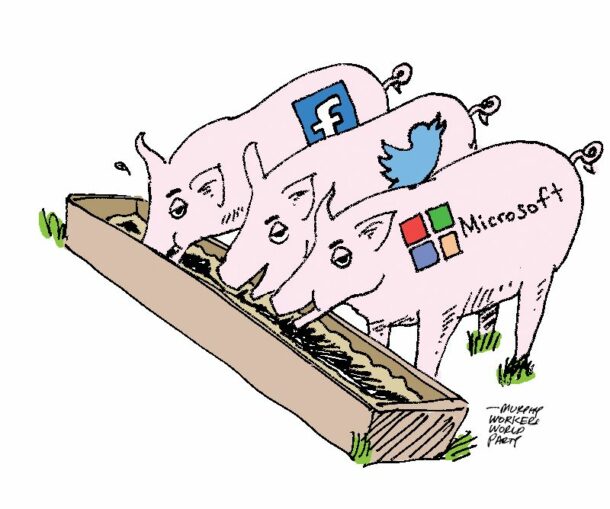 Teenage users of the app — colloquially referred to as “TikTok teens” — are credited with using TikTok to thwart a June 20 reelection rally of President Donald Trump in Tulsa, Okla., by reserving a huge number of tickets under fake names. Leading up to the planned rally, Trump and his campaign team bragged about overfilling the arena where the event was planned. Instead, they were met with a venue that was less than half-filled. The crowds they anticipated never materialized.

Trump issued an executive order Aug. 6 that will effectively ban TikTok and WeChat, another Chinese-owned messaging and social media app, from operating in the U.S. by mid-September. The reason for this drastic move is allegedly “to protect national security.” This is related to accusations around data security and privacy. In reality, the U.S. government’s action is an escalation of Washington’s ongoing efforts to undermine China, particularly in the growing battle around the development and ownership of technology.

Facebook CEO Mark Zuckerberg attended a private dinner in October 2019 at the White House with Trump, White House adviser Jared Kushner and billionaire tech investor Peter Thiel, who is also on Facebook’s board. The dinner was part of a concerted effort by Zuckerberg and his company to get an audience with some of the most aggressively anti-China members of Congress.

Of course, this event was a  bipartisan affair, meant to stoke concern about TikTok in particular and the rising threat posed to U.S. technological corporations’ global market share. (Wall Street Journal, Aug. 23)

Parroting the racist and growing anti-communist rhetoric coming from the top levels of both U.S. capitalist political parties, when asked about the meeting between Zuckerberg and Trump, Facebook representative Andy Stone told the Wall Street Journal, “As Chinese companies and influence have been growing, so has the risk of a global internet based on their values, as opposed to ours.”

Facebook was also one of the companies to found a new organization called American Edge — a supergroup composed of many major players in the U.S. tech industry — to lobby and run public relations campaigns around their interests. These interests include reducing regulations and scrutiny of the industry, as well as unifying efforts by the tech industry to take on growing Chinese technological innovation and dominance.

In American Edge’s founding statement entitled “Who We Are,” posted on its website, China is the only country other than the U.S. that is mentioned by name.  The corporate coalition cites the following fact as being a major impetus for its formation: “9 of the top 20 technology companies are now based in China rather than the U.S.”

It is curious that Facebook, among other U.S. tech giants and politicians, would cite concerns over data security and allegations of censorship in their opposition to TikTok and other Chinese-owned apps. After all, Facebook abruptly removed the pages of It’s Going Down, Crimethinc and other prominent anti-fascist and anarchist pages without any warning on Aug. 19. The tech company has a long, well-documented history of removing left-wing political pages and suppressing posts in news feeds.

In 2018, the personal information of millions of Facebook users was accessed without their knowledge by the political consulting firm Cambridge Analytica. This is only one of countless leaks of users’ personal information. In addition, these corporations show their allegiance to U.S. governmental police agencies by complying with their requests for such information.

U.S. companies line up like pigs at the trough

Following Trump’s executive order banning TikTok, U.S. technology corporations have been circling like vultures to get their hands on U.S.-based operations of the app, which could be put up for sale before the mid-September deadline banning it.

At the head of this ravenous pack are Microsoft and Walmart, which submitted a joint bid. Oracle is trying to buy the company. Twitter and other companies have expressed interest in purchasing TikTok.

There is certainly a lot of money to be made by whichever U.S. corporation buys the app, should such a sale eventually take place. On Aug. 29, China formally asserted its right to be involved in the negotiations taking place concerning TikTok’s operations in the U.S., in an effort to protect other more sensitive technologies that were developed by the app.

Similar to the campaign now being waged against TikTok, Huawei is another Chinese technology company that has been aggressively attacked by the U.S. and its imperialist allies in the last two years. Huawei recently overtook Samsung as the world’s largest smartphone producer. Huawei is currently the world’s largest manufacturer of telecom equipment, such as chips, and is a global leader in the development of 5G wireless technology.

The expansion and profitability of U.S. technological corporations are certainly key aspects of the attacks on TikTok. However, this is only one part of the latest widening conflict instigated by the U.S. against China.

By every measure China is surpassing the U.S. in technological innovation, owed in large part to the social organization of Chinese society, which encourages and fosters such developments. China’s achievements threaten the long-term viability of the position which U.S. corporations have enjoyed for decades in reaping the benefits of technological developments.

U.S. imperialism depends on its reliable partnerships with U.S.-based technological corporations, in order to develop new means to advance and protect its global imperialist interests. That those technologies can be developed elsewhere, and which in many cases are superior to those developed in the U.S., is a major threat.

The Trump administration has ramped-up open attacks on China with the imposition of tariffs and other means, but taking aim at China is a bipartisan project. Democratic Party presidential candidate Joe Biden has been competing with Trump about who can take the most aggressive stance against China — in the interest of preserving the dominance of U.S. imperialism as it continues to decline.

Faced by a multitude of severe problems — a deepening economic crisis, a pandemic, a growing movement in the streets against racist police murders and an emerging political fight around the 2020 presidential elections — Washington’s escalating attacks on China show the desperation of a capitalist system that is losing its legitimacy on every level. This environment can present many opportunities, alongside many threats, as these crises intensify.