For centuries, imperialists have conspired and competed to exploit the islands of the Caribbean, both for what their soils could produce and for their strategic positions. Early in the 17th century, colonizers began to decimate the islands’ original Indigenous peoples. Then colonizers kidnapped millions of people, mostly from Africa, and forced them with whips and chains to work to produce sugar, tobacco and indigo. 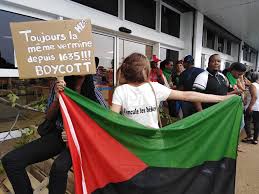 In Martinique, anti-colonial, pro-environment activists, protest use of chlordecone.

In Martinique, at a rally for anti-colonial, pro-environment activists, protesters’ signs ask when will ruling class landlords — the békés — be tried.The major colonizing European powers were France, England and Spain, whose economic position in the Caribbean was seized by the United States after a war in 1898.

While the imperialists extorted vast wealth from the people on the Caribbean islands, their rule was constantly shaken by the people’s mass revolts and revolutions. The revolution in Haiti, which declared itself independent in 1804, caused fear and trembling among U.S. enslavers in a historic challenge to French imperialism. When Cuban revolutionaries destroyed the regime of the U.S. puppet Fulgencio Batista in 1959 and began moving the island of Cuba toward socialism, U.S. imperialism was shaken.

Martinique had at least three significant insurrections by enslaved people early in the 19th century. Victor Schoelcher, a prominent French politician, drafted a decree in 1848 abolishing slavery in France and its colonies. The plantation owners in Martinique tried to resist this decree until confronted with very sharp local insurrections. As a result, they gave up and accepted compensation “for the loss of their property.”

The direct descendants of the enslavers, the plantation owners called békés, remained the ruling bourgeoisie in Martinique from that time until today. When the export of bananas to France became a major part of Martinican agriculture in the 1930s, the békés soon controlled 80 percent of the trade.

Chlordecone is a pesticide that controls a beetle that destroys banana plants. Its use was banned in the U.S. in the 1960s but it was extensively used in Martinique (and Guadeloupe) until 1993, even after being banned in metropolitan France. The Martinican békés got a dispensation to continue its use.

According to the Environmental Justice Atlas, “around 300 tones [sp] of active substance were used between 1972 and 1993 on 12,400 hectares and 6,570 hectares of banana plantations in Martinique and Guadeloupe respectively.” The atlas reports that “92% of people tested in Martinique have chlordecone in their body and 19% of children tested exceed the toxic dose.”

A French research center estimates that it will take 200 to 500 years for the chemical to dissipate. (tinyurl.com/y52rxhk9) There is no known decontamination method.

In recent years there have been marches and protests, mainly in Fort-de-France, Martinique’s capital, over the chlordecone poisoning of the environment. Most of these were conducted by the umbrella organization Zéro Chlordécone Zéro Poison. ZCZP asserted that genocide by poisoning was taking place and demanded reparations and justice.

ZCZP organized a boycott of a supermarket in the békés-owned Océanis Shopping center in Fort-de-France to highlight the landowners’ extensive use of chlordecone. Seven activists were arrested in December and accused of committing acts of violence against the police during the boycott.

When the activists went on trial in Fort-de-France on Jan. 13, an Océanis 7 protest march to the courthouse was attacked by the cops with tear gas, stun grenades and flash bombs. As the police use of excessive force became an issue in the Martinique movement, the cops arrested three militants on July 16 – Denzel Guillaume, Frédéric Maupéu and Esaïe Maxime. A 22-year old student and music teacher, Kéziah Nuissier, was also arrested and badly beaten by the cops. The beating, caught on a video by a neighbor shocked at the police brutality, went viral internationally.

These four militants went on trial Aug. 27, with Nuissier’s hearing postponed as he was still suffering from the trauma of his arrest. The other three were convicted and sentenced to prison. (tinyurl.com/yy9uljp7)

A Jan. 13 Support Committee has been formed for the four defendants, who are under legal threat because of their exemplary struggle against environmental poisoning, police violence and political repression. For more information, contact: komité[email protected]