Since the near-lynching of Jacob Blake by police, the city of Kenosha, Wis., population 100,000, has become a focus of the Black Lives Matter upsurge. Up to that point, Kenosha was just a dot on the map to most people. However, the city’s United Auto Workers (UAW) Local 72 played a pivotal role in labor history and had a decades-long record of fighting racism. 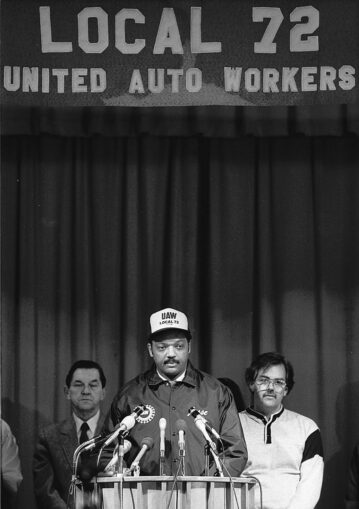 Automobile manufacturing in Kenosha began in 1902, when Thomas Jeffrey converted a bicycle factory to a car assembly plant. In 1916, the plant was acquired by Nash Motors, whose president, Thomas Nash, subjected workers to long hours, low pay and brutal conditions.

When Nash imposed a piecework system in November of 1933, during the depths of the Depression, 100 workers staged a sit-down strike. Nash then locked out all 3,000 workers in the plant — but after a week on the picket line, the workers won recognition as a local of the American Federation of Labor.

After a second successful strike in 1934 to win higher wages and a seniority system, Nash workers flocked into the union. With membership close to 100%, Nash’s Lafayette became the country’s first union-made car.

After the founding of the UAW in 1935, the Nash union was chartered as Local 72. Its delegates “demanded elected leaders and submitted an 11-point resolution to the Convention that called for a single union organizing all auto industry workers ‘regardless of kind of work, race, creed or color.’” (uawlocal72.org) As early as the 1940s, with many Black workers in the plant, the local established a Fair Practices Committee. By 1947, Local 72 secured contract language prohibiting race discrimination.

In 1936, Nash merged with Kelvinator to form Nash-Kelvinator, which in turn merged with Hudson in 1954 to form the American Motors Corporation (AMC). Local 72 in Kenosha remained a militant thorn in the side of management and solidarized itself with the emerging Civil Rights movement.

The local actively opposed school segregation and racism in Woolworth’s stores in the South and sent members to the region in 1965 to support voting rights. Around that time, Local 72 was the largest local in the UAW, with 14,300 working at the assembly plant and other nearby AMC plants.

When Chrysler bought out AMC in 1987, there were still over 8,000 workers at Kenosha Assembly. CEO Lee Iacocca initially promised to keep the plant open at least five years, but in 1988 he reversed course and announced the plant would be closing.

Speakers at labor-community rallies to stop the closing included the Rev. Jesse Jackson, then seeking the Democratic Party’s presidential nomination. Local 72 endorsed Jackson, drawing the ire of the UAW’s International Executive Board, which had endorsed Michael Dukakis in advance of the party’s convention.

After Chrysler closed Kenosha Assembly in 1989, Local 72 continued to represent Kenosha Engine, which was adding more production lines. President Rudy Kuzel supported the election of an out gay man for steward and in the 1990s backed the campaign to win contract language banning discrimination for sexual orientation — which the UAW finally won at the Big Three automakers in 1999.

In 2009, Chrysler declared bankruptcy and announced the closing of six plants, including Kenosha Engine, one of the last former AMC plants still in operation. In 2010 the company, now owned by Fiat, closed the plant, ending over a century of auto industry presence in Kenosha.

Plant closings are devastating, not only to workers and their families, but to the cities and counties that surround them. The bosses at Chrysler — now FCA — have yet to be brought to justice for their crimes against numerous communities including Kenosha.

In this climate of impunity for the bosses and the well-to-do, Jacob Blake, a Black person who had committed no crime, was shot in the back seven times by a cop and then handcuffed to his hospital bed.

The ensuing wave of protests has shown, however, that the militant, anti-racist tradition of UAW Local 72 is alive and well in the streets of Kenosha today.