As the corporate-owned press continues its biased coverage of the neoliberal gatherings in Belarus disputing the re-election of President Alexander Lukashenko, the Communist Party of Belarus (CPB) has helped organize rallies in Minsk to celebrate his election victory.

Since its foundation in 1996, the CPB has supported Lukashenko and attributed his re-election to the “natural consequence of the economic growth of the republic since he came to power in 1994.” (morningstaronline.co.uk, Aug. 17)

WFTU continues: “We call on the workers in Belarus to struggle for their rights in an organized and decisive manner, for the substantial improvement of their working and living conditions, against forces and mechanisms that engage them in competitions for the interests of the monopolies. To struggle for their democratic right to decide by themselves, freely and democratically on their present and future, instead of NATO and its instruments. This is a permanent position of the class-oriented trade union movement and it can give a way out in favor of the workers.” (wftucentral.org, Aug. 25) 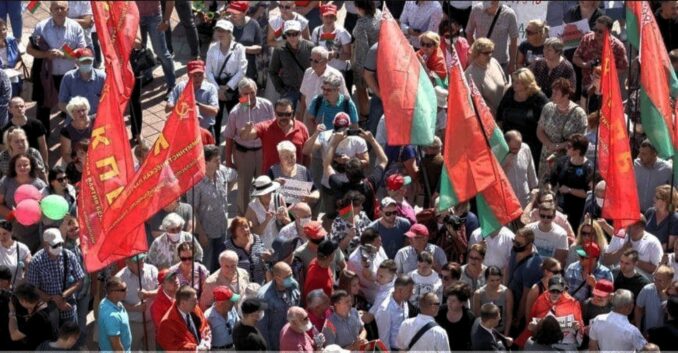 Demo in support of Lukashenko

The Communist Party of Poland has also voiced support for Lukashenko’s re-election: “In these difficult moments for the Belarusian people, we address our comrades and associates of the CPB with an expression of international solidarity. We wish you fortitude and victory in the fight against the threats facing the Republic of Belarus and the Belarusian working class.” (CPB website)

Lukashenko has spoken to his own supporters on several occasions since the Aug. 9 election.  At an Aug. 29 meeting with the Belarus Security Committee, Luksahenko said, “I want to express my gratitude to workers and I ask them to stand tall. You, workers, are the bosses of these factories. We will deal with the protesters who meet you at the entrance.” (New Worker, Aug. 21)

While participants of the pro-Lukashenko rallies proudly wave the country’s red-and-green flag, as well as red flags with hammers and sickles, the opposition is holding protests that feature the white-red-white flag once used by Nazi collaborators in the early 1940s.  Nazi occupiers in Belarus wore it as an armband on their uniforms.  The flag was also a symbol of anti-Soviet counterrevolutionaries there in the early 1990s.

Western, pro-free market and anti-communist organizations such as the National Endowment for Democracy (NED) have long funded opponents of Lukashenko.  The NED is known for financially sponsoring “color revolutions” against governments that refuse to become U.S. puppets.  In the 2000s, the NED unsuccessfully tried to prop up what was dubbed the “Blue Denim Movement” in Belarus.

According to a July 16 report on the anti-imperialist blog Moon of Alabama, “Last year (2019), National Endowment for Democracy financed at least 34 projects and organizations in Belarus.”

Shortly after the election, the main opposition leader who ran against Lukashenko, Svetlana Tikhanovskaya, moved to Lithuania.  On Aug. 25, she held a formal meeting with pro-capitalist Lithuanian officials, as well as U.S. Deputy Secretary of State Stephen Biegun, to discuss sanctions against Belarus (LRT English, Aug. 24).  The imperialist European Union announced sanctions against Belarus one week earlier, saying it refused to recognize the election results.

In mid-August, followers of Tikhanovskaya formed a so-called Coordination Council. The Council anticipates illegally overturning the election results. Some of its leaders have been arrested for advocating a violent coup.  Council members work closely with a right-wing blog known as NEXTA, which routinely encourages physical attacks against Belarusian authorities.

Despite all the threats against the legitimacy of his presidency, Lukashenko and his supporters refuse concessions to the pro-capitalist opposition.  Western imperialists and their media puppets despise Lukashenko for the same reason the Communist Parties of Belarus, Poland and the Russian Federation support him: Belarus is the only former Soviet republic to successfully reject privatization of industry.

In addition, Belarus continues many socialist policies from the days of the Soviet Union.  Unlike the other former Soviet republics, Belarus preserved socialist symbols and statues throughout the country. The United States and the anti-communist oppositionists want to destroy the social gains of Belarus, but Lukashenko and his supporters are united to combat this.