On the eve of the Republican National Convention, on Aug. 23, Trump took to the airwaves to announce that the U.S. Food and Drug Administration had approved an emergency use authorization for convalescent plasma for COVID-19 treatment. The previous day, Trump had accused the FDA of delaying the rollout of vaccines and therapeutic treatments for “political reasons.”

Many scientists and health experts questioned the reversal of the FDA’s previous position, which was that more testing was needed on the impact of the plasma treatment. Even Stephen Hahn, head of the FDA, acknowledged that he had overstated its benefits. Since Aug. 23, doctors in the U.S. have reported cases of COVID-19 reinfection — calling into question the value of plasma treatment. 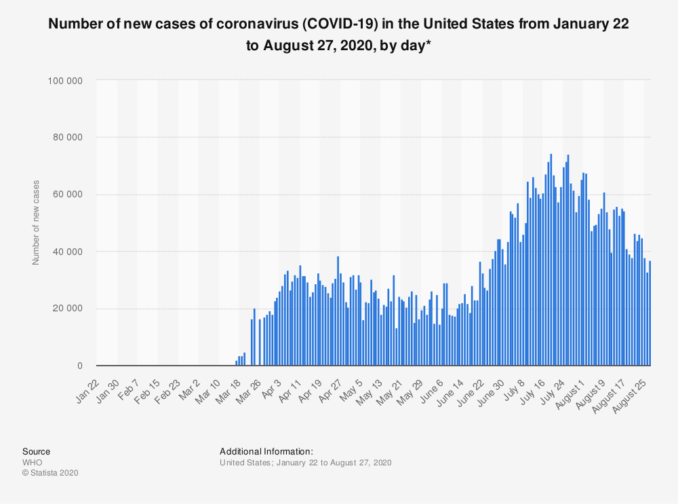 Graph shows number of new COVID-19 cases in the U.S. by day.

On Aug. 24, the first night of the RNC, with much fanfare, the Environmental Protection Agency gave emergency approval for the use of the disinfectant SurfaceWise2 by the airline industry and two Texas sports clinics. The agency called it a “major game changer.”

Yet health and chemical safety experts charge the disinfectant may do little to protect against an airborne virus, but could be harmful to passengers and airline workers when used in enclosed spaces. When sprayed, it omits potentially hazardous vapors that could linger without proper ventilation.

Jennifer Sass, a senior scientist at the Natural Resources Defense Council, stated that Dallas-based Allied BioScience, which produced the cleanser, acknowledged concerns about prolonged skin and eye contact. However, the company did not list  any tests performed about chronic or long-term effects. Sass also voiced concerns that SurfaceWise2’s data sheet states it is toxic to aquatic organisms and kills microbes, including beneficial ones.

The “Material Safety Data Sheet” for SurfaceWise2 claims that the percentages of active ingredients are a “trade secret.” But it states that one symptom of exposure might be irritation, which could cause inflamed airways and increased risk of infection by viruses.

These “emergency” declarations by the FDA and EPA were clearly politically designed to convince voters to ignore Trump’s abysmal record on COVID-19. Meanwhile, the number of cases in the U.S. has surpassed 6 million, and over 186,000 people have died. (worldometers.info, Aug. 29)

But just in case people questioned the validity of these declarations, the Centers for Disease Control and Prevention also buckled to Trump’s pressure and abruptly changed its COVID-19 testing guidelines on Aug. 26. After weeks of encouraging people to get tested if they have been exposed to the virus, the CDC now claims public testing might not be necessary unless people show symptoms of the disease.

This stunning CDC reversal comes just as more schools are reopening, many with in-person instruction which potentially risks the exposure of millions of children, young adults, and education and other school workers.

Recent studies show that while young people are less likely to exhibit COVID-19 symptoms, they may carry higher viral loads and are more likely than adults to transmit the disease to others. CDC data has linked 40% of COVID-19 infections to individuals who test positive yet show no symptoms.

While the Trump administration’s testing coordinator Admiral Brett Giroir, Assistant Secretary for Health, denied any intervention from Trump in the CDC reversal, it is undeniable that with only 66 days left before the Nov. 3 election, this move benefits Trump.