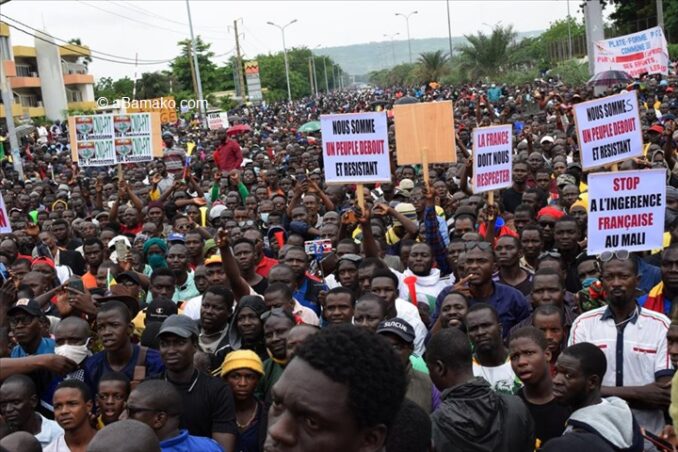 After months of agitation and protests — some going on for days, involving  thousands of people and substantial injuries — the Malian Army arrested President Ibrahim Boubacar Keïta (IBK), Prime Minister Boubou Cissé and the entire cabinet Aug. 18.

The June 5 Movement — Rally of Patriotic Forces, known as M5-RFP, which had been a main force leading the protests, welcomed the army’s move. Thousands of people cheered as the army moved the arrested politicians through Bamako, as shown on video by France 24.

The international community as a whole condemned the army and demanded  Keita’s reinstatement. The Economic Community of West African States (ECOWAS) suspended Mali’s membership, prohibited financial transactions between its members and Mali, and closed all its borders with the country..

France condemned the army’s arrests and demanded Keita’s reinstatement. The former colonial overlord in Mali currently has 5,100 troops stationed in the country, mainly in its central and southern regions. They are fighting against several jihadist militias. The U.N., which has a “peacekeeping” force MINUSMA of 14,000 soldiers in northern and eastern Mali, also condemned the army’s arrests.

U.S drones in the Sahel

Not to be left out, J. Peter Pham, U.S. State Department special envoy for the Sahel region tweeted, “The US is opposed to all unconstitutional changes of government whether in the streets or by security forces.” The U.S. has a major drone base in Niger, which borders Mali to the east and supplies operational intelligence to the French and U.N. forces.

In neighboring countries — such as Senegal, Guinea, Niger and Burkina Faso — there is a palpable sense that the eruption in Mali could be contagious. This is visible in comments on Internet sites of residents of those countries. For example, El Hadji Diouf, a lawyer and political leader in Senegal, warned its President Macky Sall against excusing the “coup makers in Mali.” (tinyurl.com/y3hwbnl5)

The countries in or near the western Sahel region — including Mauritania, Senegal, Guinea, Niger, Burkina Faso and Chad — face the same problems that exist in Mali. Skilled workers like teachers and nurses have not been paid for months. Youth can’t get jobs or an education. People lack medical care, especially necessary in this time of plague. Armed jihadist groups are confronting governments’ armed forces, while there are imperialist interventions. Tensions exist between ethnic groups. To a greater or lesser degree, all of Mali’s neighbors are afflicted by these issues.

The population of Mali is very young. Half of its inhabitants are under 16 years old. This situation makes the need for education and jobs critical. It also means those who are employed have many dependents.

The June 5 Movement is a broad coalition composed of both politically oriented Muslim groups, headed by Imam Mahmoud Dicko, and the anti-capitalist Party for African Solidarity and Independence, headed by Oumar Mariko. One banner in the big Aug. 11 protest read “IBK and his party work for the French.” Sign slogans read: “France is a terrorist state,” “Stop the genocide of France in Mali” and “This regime is Mali’s coronavirus.”

In a press release, Mariko points out that IBK has to get permission from France or rebel groups to go to certain areas of Mali. This relationship says the government does not have control of the country and is not secure, as was reported by the Belgian bimonthly magazine Solidaire on July 30. When the Malian army deployed in the northern town of Kidal near the Libyan border, it had to be accompanied by U.N. forces.  (Associated Press, Feb. 13)

After the defeat of Libyan leader, Moammar Gaddafi, and his murder by U.S.-backed forces in 2011, soldiers in his army, with their heavy weapons, moved south the following year into the Sahel, mainly into Mali and its neighbor Niger. In 2013, when the separatist movement made significant progress in northern Mali and the central government was on the verge of collapse, the French Army intervened rapidly and decisively.

Mali is a strategically important country for world imperialism, as it is in the center of West Africa, bordering seven other countries, and is rich in resources. Uranium mined and produced in Niger and Mali provides one-third of France’s electricity.  Mali also has oil and major gold deposits and other minerals.

Almost all the African migrants seeking a job or a decent economic future in Europe now come through the Sahel. European Union officials fear that if the governments in the Sahel fall apart, it would cause a steady flow of refugees which  could become a flood EU leaders would find destabilizing. This is a crisis created by years of imperialist underdevelopment and exploitation of Africa.