As the COVID-19 pandemic continues to rage uncontrollably in the U.S., it must be understood that it doesn’t have to be this way. Many countries around the world, especially those building socialism, have been able to effectively combat the pandemic, using the tools of a planned economy and robust national health care systems to prioritize the health of their populations.

On Aug. 20, Workers World Party held a webinar entitled “COVID can be defeated: Cuba, China, Venezuela and Vietnam lead the way.” This event brought together organizer and solidarity activist perspectives from these countries, which are leading the way globally in combating the virus. 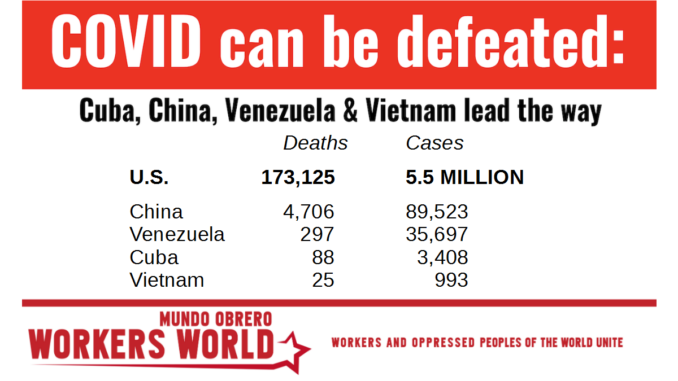 In those countries, governmental policies have involved and empowered the workers to prevent the novel coronavirus from reaching the pandemic conditions which are occurring in the U.S., and throughout much of the rest of the capitalist world.

Speakers included Lee Siu Hin, of the China U.S. Solidarity Network and National Immigrant Solidarity Network, who discussed China’s highly successful actions to combat the disease. Dr. Rosemari Mealy, of the N.Y.-Jersey Cuba Si Coalition,  and a board member of IFCO/Pastors for Peace, raised the socialist island’s effective measures to control the virus.

William Camacaro, representing the Bolivarian Circle Venezuela Solidarity, explained the impact of COVID-19 on the country and the government’s response.   And  Dr. Ngô Thanh Nhàn, of the Viêt Solidarity and Action Network and Vietnam Agent Orange Relief and Responsibility Campaign, told of that country’s public health campaign to treat and control the virus.  Under 30 lives have been lost there from the illness.

As of Aug. 24, the U.S. has led the world with the highest rate of infections and highest death count because the health — and very lives — of workers, especially oppressed people, are secondary to profits being made for the ruling class. More than 178,000 people have died.  Tens of millions of workers have lost their jobs, with an untold number of renters facing evictions.

Meanwhile, the wealth of U.S. billionaires has grown to an astounding $637 billion during the pandemic! The cruelty of capitalism is on full display during this major health crisis.