Richard Wright was a postal worker in the early 1930s, before he joined the Federal Writers Project and became a renowned novelist. Two of his novels feature Black postal workers as the main characters, with perceptive descriptions of the special oppression of Black workers as they performed the repetitive tasks involved in mail processing, working under close supervision by white managers to ensure maximum exploitation of the workers.

Wright wrote about repressive conditions in the Postal Service during a time of weak and racist unions, Jim Crow and lynchings. Postal workers had to put up with the spoils system, in which the political party that won the White House gained the right to award tens of thousands of postal management jobs to its supporters, thus securing their loyalty but disrupting postal production after every election.

The postmaster general, inevitably a political crony and fixer eager to do the president’s bidding, held a seat in the federal Cabinet, which oversaw this immense patronage scheme.

The corrupt patronage system ended only with the great postal strike of 1970, after which Congress passed the Postal Reorganization Act (PRA). It created a government/business hybrid run by a Board of Governors nominated by the U.S. President and confirmed by the Senate, with a postmaster general chosen by that board.

Thanks to the strengthened postal unions, plus the mass movements of the 1960s and 1970s, Black and Brown and women workers got hired by the U.S. Postal Service more easily than by private industry, where racist and sexist attitudes were harder to combat, especially in nonunion businesses. Today, 40% of postal workers are women. Nearly 40% are people of color, including im/migrants.

Board of rich white men

However, recent changes in top postal positions should be seen as serious threats to these living wage jobs. Privatization is coming, unless the people can put up a roadblock to these corporate plans.

Recent articles in the mainstream press have revealed how current Board of Governors members and the new postmaster general were appointed based on their political standing, not their knowledge of the postal industry, in violation of the PRA’s anti-patronage intentions.

President Trump personally directed Treasury Secretary Steven Mnuchin to find board members willing to follow his directives. The result is a board made up of wealthy white men, who in turn appointed Mnuchin’s handpicked Postmaster General Louis DeJoy, an XPO Logistics executive, known for his antilabor policies and giving significant financial support to the Republican Party and Trump.

David Williams, former vice chairman of the Board of Governors until his April resignation in protest of Mnuchin’s involvement, told House Democrats on Aug. 20 that Mnuchin demanded new governors “come to his office to kiss the ring and receive his blessing before confirmation.” (Washington Post, Aug. 22)

“I resigned from the Board of Governors because I was convinced that its independent role had been marginalized and that representations regarding an independent Postal Service for the nation were no longer truthful,” Williams said. (The Hill, Aug. 20)

Ronald Stroman, who this spring also resigned from the Postal Board of Governors, severely criticized the mail delays caused by DeJoy’s new work rules directives and his decision to remove mail-sorting machines and blue mail collection boxes. When asked if DeJoy should be prosecuted for violating federal statutes against delay of mail, Stroman replied: “Whether he intended it or not, the mail is being delayed.” (MSNBC, Aug. 21)

The popular conception is that mail delays are an effort by the Trump administration to suppress voting rights as part of a naked attempt to illegitimately reelect this openly racist, misogynist, antilabor, right-wing president.

A Washington Post article revealed that additional postal restructuring plans DeJoy will introduce in November “include raising package rates, particularly when delivering the last mile on behalf of big retailers; setting higher prices for service in Alaska, Hawaii and Puerto Rico; curbing discounts for nonprofits; requiring election ballots to use first-class postage; and leasing space in Postal Service facilities to other government agencies and companies.” (Aug. 20)

Over 800 rallies to ‘Defend the Postal Service’ 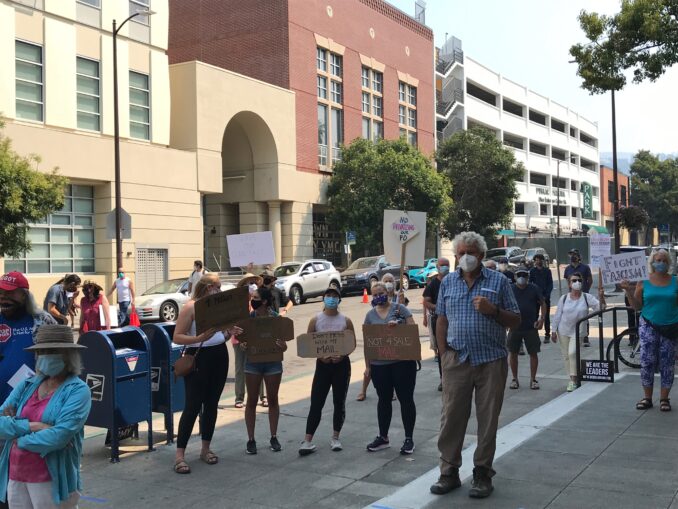 In response to current mail delays, after weeks of signing petitions and making phone calls to Congressional members, thousands of people took part in more than 800 rallies at post offices around the U.S. on Aug. 22. Demands included a $25 billion rescue fund for the Postal Service, repeal of an onerous 75-year pre-funding requirement and the firing of DeJoy for delaying the mail.

The American Postal Workers Union is organizing another day of post office rallies on Aug. 25. Their demands are: “Provide at least $25 billion in immediate support for the Postal Service; Stop the mail slowdown policies introduced by Postmaster General DeJoy; Ensure public confidence in voting-by-mail by providing all necessary resources for the most timely delivery of election mail possible.”

Despite a national order not to reinstall letter-sorting machines that had been dismantled over the past month, Postal Service plants in Tacoma and Wenatchee, Wash., have done just that, according to workers there. The two plants’ machines were revived even though the Postal Service’s head of maintenance, Kevin Couch, had ordered plants countrywide on Aug. 18 not to do so.

And at one of Milwaukee’s postal stations, letter carriers, as a united workforce, have refused to leave for the street until all mail has been cased (sorted), forcing management to back down and approve overtime.

What would Richard Wright think?

Richard Wright died in 1960 when he was only 52 years old. The former postal worker is widely acknowledged as one of the most important writers of the 20th century. His eldest daughter, Julia Wright, herself an internationally known human rights leader, still pays attention to the postal service where her dad worked and the struggles of people who work there today.

After reading about growing postal resistance this week, Wright emailed this writer with a message of solidarity: “Richard is grinning: May the defiance spread !!!”