This is a slightly edited talk given at a Workers World Party webinar on Aug. 20 on “COVID can be defeated: Cuba, China, Venezuela and Vietnam lead the way.” 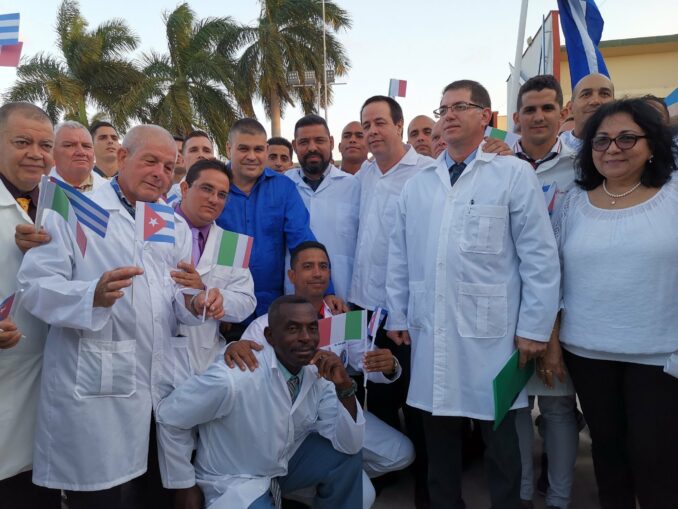 I would like to thank Workers World for the opportunity to participate in this webinar. COVID-19 can be defeated by recognizing the heroic people of Cuba, China, Venezuela and Vietnam who are all facing in some form or another sanctions, blockades and or strategies to sabotage every aspect of their socialist governments’ economic, social and cultural policies.

The U.S embargo or blockade of Cuba has now entered its sixth decade of unsuccessful attempts to wreak havoc on that nation. We cannot talk about how Cuba has been able to defeat COVID without first acknowledging that for 60 years Cuba has faced the longest trade embargo in history.

First imposed in 1960 under the Eisenhower administration with the prohibition of export of all products except for foods, medicines and medical supplies, the U.S. embargo of Cuba is in essence a relic of the Cold War initiated by the capitalist West to undermine socialist developments in the Soviet Union, China and, by 1960, Cuba.

Notwithstanding the ending of the Cold War with the collapse of the former Union of Soviet Socialist Republics in 1991, Congress in the years since has continued to pass — and presidents have signed into law — legislation strengthening the embargo. The Helms-Burton Act is unquestionably the most draconian as well as the most controversial of the laws; the embargo cannot be ended without congressional concurrence through legislation.

Cuba is not isolated internationally and has survived and is supported by an overwhelming majority of the countries in the world.

Despite the blockade during the global pandemic, Cuba has shown the way in confronting COVID-19. First and foremost, most of the trajectory of this pandemic, like all pandemics, is based on the overall condition and organization of the society. Cuba is a socialist society where, from the very beginning of the triumph of the revolution, health care, education, housing and the protection of workers were built into the new Socialist Constitution.

‘Health care is a human right’ in Cuba

Health is considered a human right. The country’s health care system is one of the world’s greatest contributions because it operates both horizontally and vertically. By that I mean the delivery of health is integrated. In every community there is a family doctor who lives over the polyclinic and among staff in the community. So, you have a tertiary health system which was created and sustained throughout its revolutionary history.

Cuba has a relatively high number of medical workers per capita.  Officials say there are currently about 90,000 in the country of almost 11.5 million people. Decades, years, months and weeks before COVID19 ever arrived on the island — because of how the health system is structured — the government and the entire health care system, including scientists, knew where every person lived, who was at risk, what vaccines and medications they had, by going door to door in every neighborhood, making home visits with a nurse and sometimes Promotora de Salud (community health workers).

Having six decades of experience like no other country or health system, they had the skills, the technology, scientific advances and human capital to deal with combating outbreaks and epidemics. Cuba had the experience of first developing and using interferons to arrest a deadly outbreak of the dengue virus in 1981. That  experience catalyzed the development of the island’s now world-leading biotech industry. The protocol Interferon — only one tool of many that Cuba has — played a crucial role in some of those previous outbreaks and epidemics, often saving seriously ill patients’ lives.

Compare this to the state of Georgia, which has a population of 10.5 million people.  Some 22,664 people have been hospitalized since February, and there have been 4,840 deaths. The current active number of cases is 239,133, compared to Cuba’s 526 patients who are still ill. Recovery rate in Georgia is 2%. The recovery rate in Cuba is 82%. Georgia has 455 times more people who still have the virus.

Socialist gov’t and an informed people

In Cuba, the strength of combating COVID is reflected in the will of the socialist government, its scientists, medical personnel and informed people. There is contact tracing and people are coming together to coordinate the sewing of masks and distribution of food to the elderly and physically challenged. Recently, when there was a spike of cases in the provinces of Havana and Artemisa, the country reinstated the curfew.

Cuba is leading the way to defeat COVID, not in a selfish way or in its own self-interest.  First and foremost, the country is a recognized world leader in the development of antiviral drugs and therapies for cancer, diabetes complications, and most recently for COVID-19.  More than 45 countries have requested the country’s Interferon Alpha 2B protocol.

These therapies are being used around the world to treat patients and have been particularly effective helping older and more at-risk patient populations.  I think the most encouraging breakthrough occurred over the past few days when Cuba announced: “The central state enterprise management group BioCubaFarma reports having received permission to begin clinical trials of a Cuban candidate vaccine Identified as FINLAY-FR-1 to prevent COVID-19, capable of producing a strong immune reaction to a SARS-COV-2 infection.” (Granma, Aug. 20)

Cuba was one of the most prepared countries in the world for COVID-19. While in many countries fighting the pandemic, it is also making major international contributions with the Henry Reeve International Medical Brigade.

If I may close by saying this internationalism has been exemplified right here at home through the IFCO (Interreligious Foundation for Community Organization) partnership with the Latin American School of Medicine (ELAM) scholarship program since 1999. ELAM has trained over 35,000 doctors from 138 countries, including graduating 195 U.S.-trained doctors.

In a post-embargo world, U.S. hospitals and research institutions would have direct access to Cuba’s drugs, therapies and doctors to potentially improve the standard of care for millions of citizens of the USA in the defeat of COVID-19.

What you can do!

Contact elective officials to demand that they focus on the Cuban drug known as Interferon Alfa-2B, which has been produced in China since 2003 by the Cuban-Chinese joint venture ChangHeber. Demand that the drug be allowed in the U.S. as a protocol to treat COVID-19.

Call on elected officials to demand the repeal of Helms-Burton or to temporarily suspend the Cuban embargo, which would enable Cuba to obtain the humanitarian aid and medical supplies that it needs to respond to the coronavirus pandemic.

Contact and organize local city councils to pass resolutions that support these initiatives while calling for an end to the blockade.

Consider joining the next IFCO Pastors for Peace Caravan to Cuba.

Dr. Rosemari Mealy is with the New York-New Jersey Cuba Sí Coalition and on the Board of IFCO/Pastors for Peace.