Mahmoud Nawajaa is free! An international campaign pressured Israel to release the general coordinator of the Palestinian Boycott, Divestment and Sanctions movement from detention. Armed Israeli forces charged into Nawajaa’s home near Ramallah in occupied Palestine on July 30 and brutally seized him. He was illegally held without charges until a military court freed him on Aug. 17. 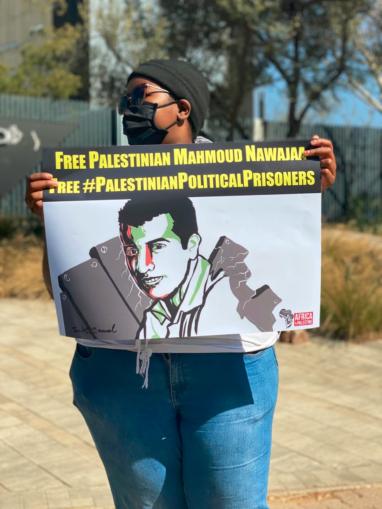 South Africans and supporters of Palestine in Johannesburg on Aug. 14. Photo caption: Africa4Palestine

Nawajaa praised his supporters after his release: “Pressure works. Sustained global pressure works even better. I am deeply grateful to all of those who pressured apartheid Israel to release me. From Europe and the Arab world, to Southern Africa, Latin America, North America and Asia, your solidarity gave me strength and kept alive my hope to be reunified with my loving family and my inspiring wider BDS family.” He also thanked Palestinian and human rights organizations. (bdsmovement.net, Aug. 17)

Nawajaa stressed that Israel can’t break this movement despite all the “resources they’ve invested in their war of repression against BDS.” He called for an intensification of the BDS campaign to “end the system of apartheid and oppression and free all 4,700 Palestinian prisoners.”

Israel has escalated repression against the resistance movement; the state arrested 17 activists in occupied Palestine, including Nawajaa, in the same week. These detentions occurred as Palestinian organizations call for global sanctions against Israel to stop the Zionist state from annexing part of the West Bank and to end its apartheid regime.

The BDS movement denounced the U.S.-backed “peace” agreement made on Aug. 14 between the “despotic” United Arab Emirate rulers and Israel, and refuted the UAE’s claim that it would freeze Israel’s annexation plan, saying that was a “lie.”

All Palestinian factions and groupings have voiced their opposition to the pact. It was signed as Israel was bombing Gaza and stealing land, supporting settlements and attacking Palestinians in the West Bank.

In solidarity, South Africans and supporters of Palestine demonstrated outside the Israeli Embassy in Johannesburg on Aug. 14 calling for Nawajaa’s release and condemning the UAE-Israel pact. Members of Africa4Palestine, the South African Communist Party, Swaziland Solidarity Network and the National Education, Health and Allied Workers Union participated.