Makasi was 16 when he first learned about Fidel Castro. As a Black Latinx youth, Makasi notes that “growing up as a Puerto Rican in the U.S., learning about Fidel showed me how someone from a small Caribbean island can challenge the most powerful and most vicious empire in the world. That’s a lesson I’ll keep with me my whole life.” 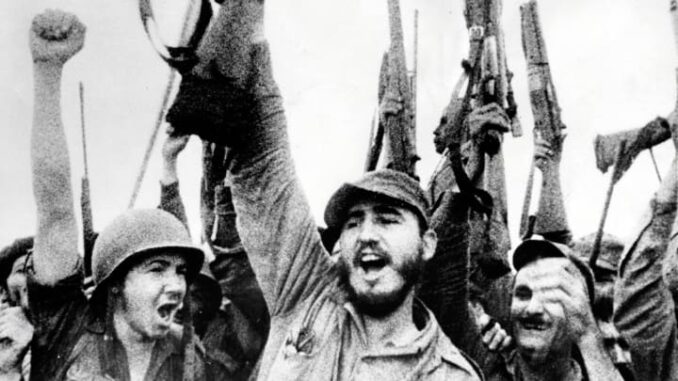 Fidel Castro would have been 94 this Aug. 13. Fidel and his comrades organized and led a socialist revolution in Cuba that triumphed in 1959 and freed the beautiful island from capitalism and imperialism forever.

It is hard to fathom a world without Fidel, especially now, with the ascendancy of a white supremacist administration in power in the U.S.

But this great Marxist-Leninist revolutionary lives on, and he will forever stay in the hearts and minds of workers and oppressed people.

A visionary for all times

The Cuban people say that Fidel could see so far ahead that he could see around corners. That the continent of the Americas produced such a great Marxist-Leninist is a triumph for all times.

From the very early days of the revolution, Fidel demonstrated that he studied and was guided by the principles of Marx and Lenin — definitely with a Caribbean flair. For Fidel also studied the works of such Latin America revolutionaries as José Martí and Simón Bolívar.

But it was the ideas of Marx and Lenin that guided him, the Cuban Communist Party and the masses who followed their lead, and that helped seal the fate of socialist Cuba.

Fidel said in 1961: “The more we learn about imperialist policies throughout the world, the more we dig deeper and uncover the bloody claws of imperialism, the miserable exploitation … the crimes they commit against humanity, the more … we feel sentimentally Marxist, emotionally Marxist, the more we see and discover all the truths contained in the doctrine of Marxism. The more we have to trace the reality of a revolution and the class struggle, and we see what the class struggle really is, in the setting of a revolution, the more convinced we become of all of the truths Marx and Engels wrote and the truly ingenious interpretations of scientific socialism Lenin made.”

This kind of deep thinking, this zest for revolutionary theory, is exactly why socialist Cuba has been able to stand up to U.S. imperialism and build socialism right under Washington’s nose.

The U.S. government under both Democratic and Republican administrations has worked nonstop to overturn the Cuban Revolution. But nothing has worked. No bombs, no biological warfare, no inhumane blockade have succeeded in overturning the Revolution.

The Cuban masses found freedom. They also know that their free health care, education and much more is still beyond the reach of their very own neighbors in Haiti or Puerto Rico, still a U.S. colony.

These gains will be fought for by Cubans to the end because Fidel Castro demanded and institutionalized that education, health care and opportunity for all would be provided for each and every Cuban. Furthermore, international solidarity — a system that sends doctors abroad and not bombs — is also deeply ingrained in the socialist project of Cuba.

There is not a single Latin American, Asian or African revolutionary who does not mourn the loss of Fidel — and also carries on his spirit. Throughout the world, and indeed here in the U.S., Fidel lives and will always live on.

In a recent article, “Happy Birthday, Fidel Castro: We’ll Forever Remember Your Solidarity with Our Struggle,” anti-apartheid fighter Ronnie Kasrils wrote that Fidel’s “life and legacy are intrinsically bound up with Africa’s destiny — earning him the undying gratitude of its peoples. In Fidel’s immortal words, after forcing the racist South African military to make its ignominious retreat from Angola after the battle of Cuito Cuanavale in 1988: ‘The history of Africa will be written as before and after Cuito Cuanavale.’” (Jacobin, Aug.13)

Comrade Fidel contributed slogans that will live forever, such as “Victory or Death.” “Homeland or Death.” “Socialism or Death.”

And as the workers and the oppressed of the world face an unprecedented economic and social crisis, as the global COVID-19 pandemic especially obliterates people of color, the idea of fighting our oppressors to the death becomes ever more necessary and ever more desirable.