Voting rights for the incarcerated in Florida

The Supreme Court upheld a ruling of the 11th Circuit Court of Appeals allowing a modern-day poll tax to remain in effect for formerly incarcerated people trying to vote in the state of Florida. This directly contradicts nearly two-thirds of the Florida electorate, who voted in 2018 to amend their state constitution to allow those convicted of felonies to vote. (NPR, July 17) 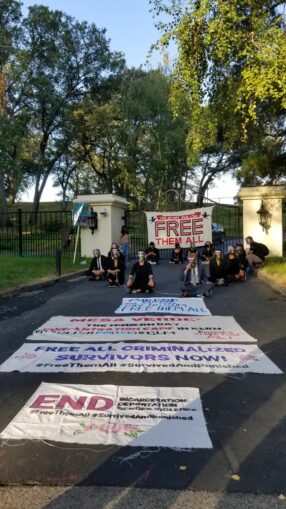 Undocumented community organizers and immigration attorneys chained themselves to the gate at Governor Newsom’s mansion on July 27. Organizing as the California Liberation Collective, and in solidarity with the demands of those on strike at Mesa Verde Detention Center, their call is to free them all!
Credit: Survived and Punished

The most recent ruling specifically says that this group of formerly incarcerated folks cannot vote if they have any fees or fines owed to the state. “This court’s order prevents thousands of otherwise eligible voters from participating in Florida’s primary election simply because they are poor,” explained Justice Sotomayor in her dissent. (LA Times, July 16) This is the fourth case this election year alone where SCOTUS has declined to protect voting rights. The U.S. has not ever been committed to holding free and fair elections anywhere in the world, much less for folks deemed “criminal.”

In the face of inhumane conditions, heightened by the COVID crisis, many locked-up people are fighting back against injustice. According to journalist Keri Blakinger and several sources, the Briscoe Unit in South Texas saw 90 prisoners rise up and take a 21-year-old guard hostage on July 18. This move was  reportedly  in response to continued COVID restrictions limiting phone and out-of-cell time. (tinyurl.com/yynph752) Being able to talk on the phone and move a bit more freely are the prisoners’ only connections to others outside their cramped cages.

Dozens of massive prison rebellions that took place across Italy at the beginning of this pandemic were in response to lack of visitation. (Workers World, April 3)

The Mesa Verde Detention Center in California announced a work stoppage on July 23. As reported by Workers World, the coordinated hunger strike was in response to the murder of George Floyd. Those behind bars at Mesa Verde explained, “Mesa Verde runs off of our labor. We are the ones who prepare and serve the food, who clean the bathrooms and the dorms. We are paid $5 per week for our official jobs, and the rest we do for free. ​We will not work and we will not collaborate with GEOGroup. We refuse to make it easier for you to continue unnecessarily caging and murdering us.” (tinyurl.com/y28at72m)

The Mesa Verde actions were coordinated in solidarity with a hunger strike going on in the immigration pod at nearby Yuba County Jail. Folks locked up at both facilities released unified sets of demands. The first set targeted Gov. Gavin Newsom and Attorney General Xavier Becerra: “1. Stop transferring people ​who are released from California custody into [Immigration and Customs Enforcement] detention centers. 2. Halt the expansion of immigration detention facilities​ in the state. 3. Immediately inspect all ICE facilities ​in the state to oversee the standards of care in these facilities and independently investigate the deaths that have occurred there during the pandemic.”

The second set of demands addressed ICE, GEOGroup and the Yuba County Sheriff’s Department about conditions on the inside. These brave detained leaders are moving forward to take what they need in the only way those who cage them will understand: Work stoppage!

No one ‘blooms’ in detention

A Michigan family court judge, Mary Ellen Brennan, denied the release of a 15-year-old from detention in the middle of a deadly pandemic. The Black child was caged simply because she did not turn in her online schoolwork, which the court considered a violation of her probation. The judge said at the July 13  hearing: “I think you are exactly where you are supposed to be. You are blooming there, but there is more work to be done.” (ProPublica, July 20)

Nothing exemplifies the callousness of the courts and brutality of policing and prisons more than this decision to punish a Black child with the full weight of the state for not completing homework. While the young girl has shown exemplary behavior inside, that is no reason to continue to detain her during a pandemic. No one “blooms” in detention. Tear down the walls!