On July 25, groups of protesters marched in Austin, Texas, for Black lives and in solidarity with Portland activists who are facing repression by Trump’s secret police. It was nearly the 50th day that Whitney Mitchell, a disabled Black woman, and her fiance of 10 years, Garrett Foster, were there. They both consistently marched at Black Lives Matter demonstrations. Foster assisted Mitchell, and he armed himself to protect her and other demonstrators from potential fascist violence. 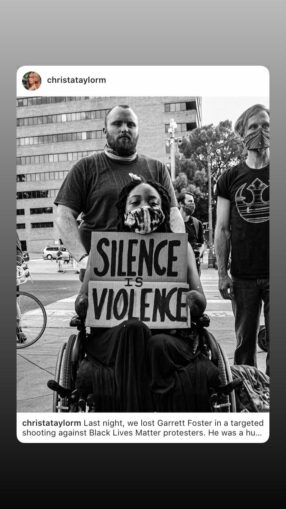 Based on the video recorded by local journalist Hiram Gilberto, the protesters approached a blocked-off intersection when a blue sedan rushed through the barricades where people were still walking, with the intent of instilling fear in  them. Demonstrators turned toward the vehicle and forced it to stop.

Meanwhile, Foster crossed the intersection with Mitchell.  Upon seeing what was happening, he stepped in between her and the vehicle to make sure that she and others weren’t hit.  Five shots rang out from the vehicle, while three additional shots were fired by a random protester toward the vehicle as it drove away. The initial five shots were aimed at Foster. Witnesses said Foster never aimed his rifle at the driver. (Dallas Morning News, July 27) Foster was pronounced dead an hour and a half later.

The gunman turned himself in to the police, cooperated with officials and gave his “account” of the events that transpired. Police released the murderer from custody the same night, without naming him or charging him with a crime. Even though Foster’s blood was on the shooter’s hands, the police took his word for what happened.  Officials said criminal charges depend on findings from a further investigation.

The bourgeois media and Austin Police Department representatives wasted no time reprimanding and victim-blaming Foster. Both “liberal” and “conservative” news outlets have written their so-called “accounts” of events based on information that has come directly from the perpetrator’s report to the police.

On the one hand, there are the anti-gun liberals blaming Foster for carrying a legally permitted firearm to protect his disabled fiancee.  On the other hand, there are the reactionary, neo-fascist pundits who are celebrating his death, while praising the rich white lawyers in St. Louis, Mo., who pointed their guns at peaceful protesters on June 28.

Austin Police Chief Brian Manley took the opportunity to reiterate the need for full police funding, citing a rise in vehicular crimes, even though Foster’s murderer was released! These pigs haven’t done anything at all about the vigilantes because they are too busy policing Black and Brown communities. The calls to abolish the police are getting louder and more frequent. 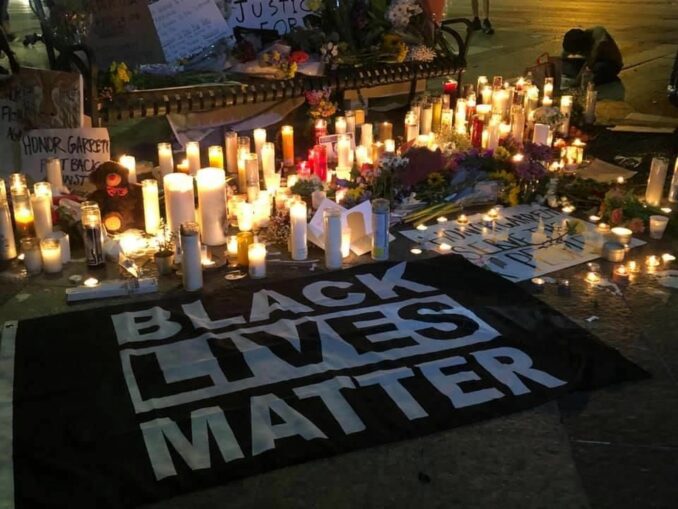 A day later, July 26, protesters, family  members and mourners gathered at the intersection of Fourth Street and Congress Avenue in downtown Austin, the spot where Foster was murdered, and held a vigil in honor of his life. People of all ages, nationalities and genders came to pay their respects to Foster. Families, college students and even bystanders attended the vigil. Barricades with armed volunteer defenders were stationed around the perimeter to make sure every attendee was safe.

Candles were lit throughout the blocked-off intersection as people spoke about Foster’s life, his commitment to Mitchell and his commitment to Black Lives. Many people and members of groups spoke, including Patricia Kirven, Mitchell’s mother, and some of Foster’s friends and relatives.  Also speaking were some coordinators of the previous night’s march, who also helped to organize the vigil.  Toward the end, there was a prolonged moment of silence for Foster and his family. Bringing the vigil to a close, attendees knelt with their fists up.

Once the vigil concluded, the leaders led an impromptu march that took the same path from the intersection all the way to police headquarters and back. The march was tight and well organized.  It moved continuously to ensure every person’s safety. Armed vigil attendees and volunteer medics rushed to each intersection as marchers passed.  They created makeshift barricades with bikes, scooters, traffic cones and their bodies to make sure no other vehicles tried to recreate the horror of the night before.

One vehicle drove through the bike and traffic cone barricades as the marchers passed.  No one was in that area at the time, so no one was hurt. Toward the end of the march, participants placed their candles at the site of the murder, along with signs, flags and flowers to create a memorial for Foster.

Revolutionary chants resounded throughout the evening.  They included: “F–k the police!” “One solution, Revolution!” and “Stand Up! Fight Back!” Through the chants, the pain and anger in people’s voices could be heard.

Those who preached nonviolence in the face of state and state-sanctioned violence are now looking at other tactics, as the fascist police and their collaborators violently attack them. Many activists who once called for defunding and reforming the police are now looking toward total abolition and liberation of the people.

Kirven set up a GoFundMe page for funeral, burial and other expenses, which raised over $107,000 within 24 hours.  That highlighted the support people will give to care for one another during these difficult times.  She wrote about Foster in a heartfelt way on the fundraising page.

Kirven described Foster as “a great person, taken away from his fiancee and loved ones,” and said he “always fought against injustice, served in the military and was fiercely protective of his fiancee.”

Mitchell and Foster have both been active in the community, feeding the houseless, protesting against evictions and demonstrating for Black lives. They are both shining examples of people who have given their lives and bodies to the fight for justice.  Garrett Foster presenté!

The writer attended the July 26 vigil.