Schools in the U.S. provide students with much more than an education. They provide child care, meals (for 14 million students), medical services (mostly for students with disabilities), psychological counseling, supervised physical activity and social connections. 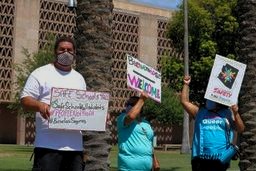 There are more than 135,000 educational institutions and 56.6 million students in grades K through 12. Since 2014 the majority of all public school students have been children of color. (National Center for Education Statistics)

While all parents want their children to be able to return to school, more than two-thirds polled want schools physically reopened only if safe. That feeling is strongest in Black and Latinx families.

But President Donald Trump wants students in this coming semester to physically face their teachers. His billionaire Education Secretary Betsy DeVos has said in  interview after interview: “Students have to go back to the classroom.”

Apparently Trump believes that, unless kids are back in school, the economy is not going to recover, which he needs to be reelected. However, he and DeVos don’t have a plan for how to do this. They criticized an early draft from the Centers for Disease Control and Prevention as “very tough and expensive guidelines.” Trump and DeVos demand the country’s 13,000 public school districts draw up plans to keep their staff and students safe, even with severe budget cuts.

The recently modified CDC guidelines read like a political justification of the Trump-DeVos position — rather than recommendations for actions/policies based on scientific facts.

Most of the country’s teachers, pediatricians and parents want the kids back in school.  But the schools are so underfunded that the physical changes needed to make them safe (airflow, social distancing, cleaning) are not currently available or affordable. In some schools, it’s a big deal in some classrooms to get any of the windows to open.

Teachers didn’t sign on to risk their lives so businesses can function normally. Other workers in the school system — bus drivers, maintenance, paraprofessionals, councilors and food service workers —  have the same issues with re-opening.

New York City schools didn’t close in March until a growing sick-out made it difficult for the system to function.

Almost three-quarters of all teachers in the United States are in unions affiliated with either the American Federation of Teachers or the National Education Association. In some states, like New York, the AFT and NEA are merged.

On July 17, Randi Weingarten, president of the American Federation of Teachers, told the Guardian: “It’s as if Trump and DeVos want to create chaos and want to jeopardize reopening. There’s no other reason why they would be this reckless, this callous, this cruel.”

NEA President Lily Eskelsen García wrote a column for the July 7 USA Today slamming President Trump’s suggestion that schools reopen this fall: “The White House pressure campaign presents a false choice between the health of our students and the health of our economy. It’s appallingly reckless.”

García added: “No one wants to welcome students back to classrooms more than America’s educators. We know that nothing can replace the magic of a student’s curiosity when they are able to learn alongside their peers from a teacher who has dedicated her life to the success of other people’s children.”

García went on to examine the recent loss of funding for education. While billionaires like DeVos, Trump and Jeff Bezos, owner of Amazon, have seen their wealth blossom during the COVID-19 crisis, workers in education and elsewhere have had to confront sickness and unemployment.