As if pandemic challenges, a deep financial crisis and an openly hostile president were not bad enough, over 600,000 postal workers also face new work rules which impose speedups, while delaying the delivery of first-class mail and parcels. 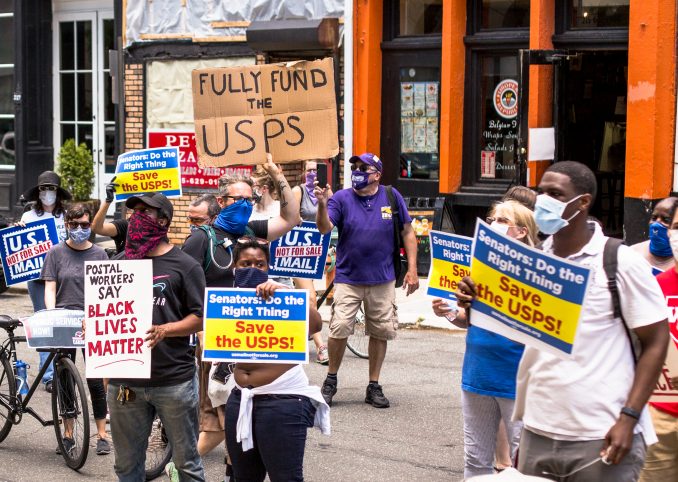 Louis DeJoy, newly appointed Postmaster General, is a Trump ally and big Republican Party donor, with an anti-labor history.  He issued a directive on July 10 which puts a torch to a centuries-old culture of the postal system on the sanctity of first-class mail. It says: “Carriers must begin on time, leave for the street on time, and return on time. One aspect of these changes that may be difficult for employees is that — temporarily — we may see mail left behind or mail on the workroom floor or docks, which is not typical.” (tinyurl.com/y63uh9b4)

For decades, postal management threatened workers with suspensions and terminations for delaying the mail, a violation of service standards. On the other side of the divide, union stewards filed grievances defending workers by pointing out management policies were causing the delay of first-class mail.

DeJoy is instructing postal management to violate decades of postal regulations and federal law as everyday policy. Federal law 18 U.S. Code Section 1703 (a) headed “Delay or destruction of mail or newspapers,” says: “[A] Postal Service officer or employee [who] unlawfully secretes, destroys, detains, delays, or opens any … mail entrusted to [them] or … come[s] into [their] possession, which was intended to be conveyed by mail, or carried or delivered by any … employee of the Postal Service, or forwarded through or delivered from any post office or station … shall be fined … or imprisoned not more than five years, or both.” (tinyurl.com/y3xd8odj)

APWU President Mark Dimondstein assailed the new measures, saying they hit at the very core of the agency’s mission, which is to “provide prompt, reliable, and efficient service.” He stated: “These additional moves by the new postmaster general seem to send the opposite message, which is that mail can wait. It will likely undermine the mission we’re dedicated to. … [I]t will likely lead to slower, less prompt, less reliable, and really less efficient service.” (Business Insider, July 14)

In addition to delaying mail, the new work rules will increase tensions on the job, as supervisors pressure workers to do their deliveries and other work within eight hours.

As Diamondstein explains, USPS overtime cuts during the pandemic puts a strain on postal employees as well as customers: “When you combine a pandemic with short staffing, you’re going to have some overtime, and to arbitrarily just say it’s done means that the service that’s coming with that overtime is going to be gone.” (Federal News Network, July 16)

Postal workers have been working 10 to 12 hours a day six days a week because of the huge increase in parcel deliveries, understaffing due to coronavirus-caused absences, frequent turnover of part-time workers, overburdened routes and management’s refusal to hire enough workers.

Over 4,000 postal workers have been diagnosed with COVID-19, and 64 postal employees have died from the disease. Thousands of exposed workers have had to self-quarantine for two weeks or more.

Hundreds of grievances are bound to be filed as workers fight back against these unfair, counterproductive measures.  Time favors those who want to privatize the postal service. More militant actions may be required if it takes weeks or months to resolve the contentious issues caused by DeJoy’s directive, and the public gets tired of undependable service and looks to competitors for postal delivery.

At the same time as they fight back within the post office, postal workers and their unions are organizing support for the right of all people in all communities to universal postal services.

The USPS provides universal mail delivery at the lowest standardized prices in the world. Only the USPS makes regular deliveries to remote islands and secluded areas that would not be profitable for a private business. In rural and low-income regions where broadband isn’t commonly available, the postal service provides a much-needed lifeline of communication.

The USPS also plays an important role in ensuring that voters can cast their ballots by mail. DeJoy’s work rule changes could also decrease people’s confidence in the  post office’s ability to deliver their ballots accurately and on time.

The USPS is normally self-sufficient, financing operations with its own revenues without using taxpayer money. Congress passed a law in 2006 that required the postal service to fund retiree health benefits for an incredible 75 years into the future! That’s an onerous $5 billion annual financial burden not imposed on any other government agency or private corporation. Combined with the unprecedented financial effects of the pandemic, the USPS may run out of funds later this year.

As a result, the Postal Board of Governors has asked for direct emergency financial assistance, similar to the huge amounts of aid given to large corporations in earlier stimulus bills approved by Congress this spring.

The Senate is scheduled to vote on a new stimulus bill in August that would include a $25 billion rescue plan for the USPS. The APWU asks everyone to call their senators on July 23 or thereafter to save the postal service.  (apwu.org/savepostoffice)

If postal workers and communities work together, we can save the people’s post office!