Despite the brutal attempt of the White House to crush the heroic Black Lives Matter movement by sending camouflaged federal agents − secret police − to Portland, Chicago and other U.S. cities, the movement and all who support it have been fighting back. 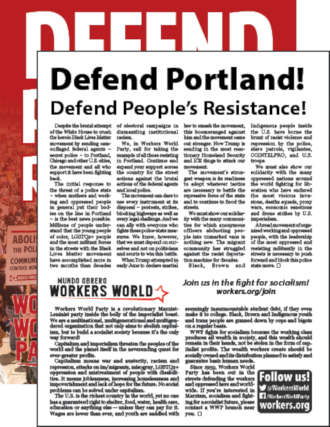 The initial response to the threat of a police state − when mothers and working and oppressed people in general put their bodies on the line in Portland − is the best news possible. Millions of people understand that the young people of color, LGBTQ2S+ people and the most militant forces in the streets with the Black Lives Matter movement have accomplished more in two months than decades of electoral campaigns in dismantling institutional racism. 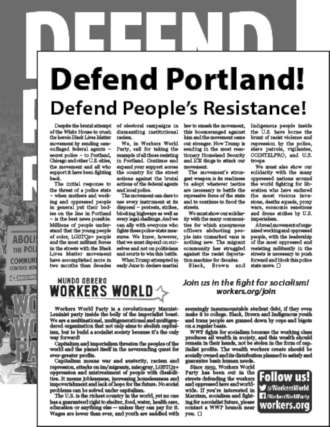 We, in Workers World Party, call for taking the example of all those resisting in Portland. Continue and expand your support across the country for the street actions against the brutal actions of the federal agents and local police.

The movement can dare to use every instrument at its disposal − protests, strikes, blocking highways as well as every legal challenge. And we can ally with everyone who fights these police-state measures. We know, however, that we must depend on ourselves and not on politicians and courts to win this battle.

When Trump attempted in early June to declare martial law to smash the movement, this boomeranged against him and the movement came out stronger. Now Trump is sending in the most reactionary Homeland Security and ICE thugs to attack our movement.

The movement’s strongest weapon is its readiness to adopt whatever tactics are necessary to battle the repressive force of the state and to continue to flood the streets.

We must show our solidarity with the many communities for which anonymous officers abducting people into unmarked vans is nothing new. The migrant community has struggled against the racist deportation machine for decades.

Black, Brown and Indigenous people inside the U.S. have borne the brunt of racist violence and repression by the police, slave patrols, vigilantes, COINTELPRO, and U.S. troops.

We must also show our solidarity with the many oppressed nations around the world fighting for liberation who have endured the most vicious invasions, deaths squads, proxy wars, economic sanctions and drone strikes by U.S. imperialism.

A broad movement of organized working and oppressed people, with the leadership of the most oppressed and resisting militantly in the streets is necessary to push forward and block this police state move.