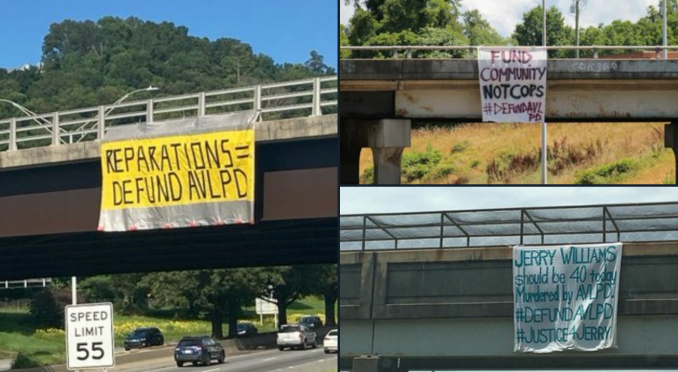 #DefundAvlPD banner dropped in Asheville the week of July 13.

Last week the anti-police campaign, #DefundAvlPD, in Buncombe County won a city-level reparations commitment. But it continues to push, demanding defunding to stop the ongoing white supremacist violence as well as make efforts to repair it. Multiple banner drops the week of July 13 as part of the #Justice4Jerry campaign sought justice for Jerry Williams, who Asheville police shot and killed in 2016. 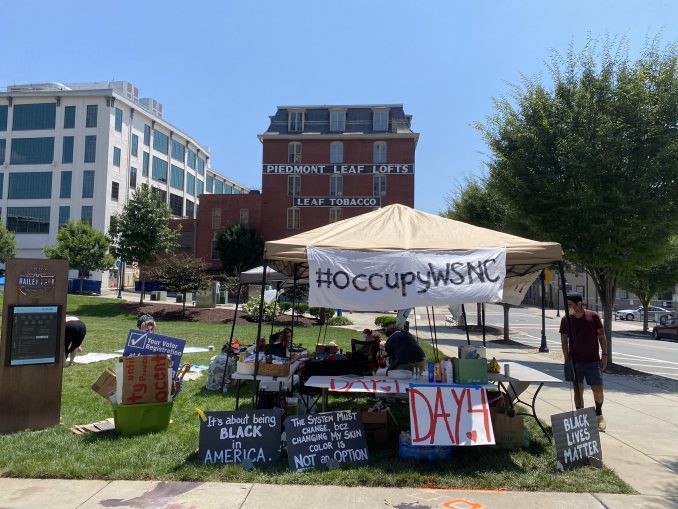 Following the in-custody murder of John Neville in Forsyth County jail earlier this year, organizers formed a community bond fund, staged solidarity actions by first responders with Black firefighters organizing against racism, and supported the NC BORN 7-day Governor’s Mansion action in Raleigh, the capital. Now Triad Abolition Project is in the fifth day of an encampment on the steps of the Forsyth County Jail demanding justice for John Neville. 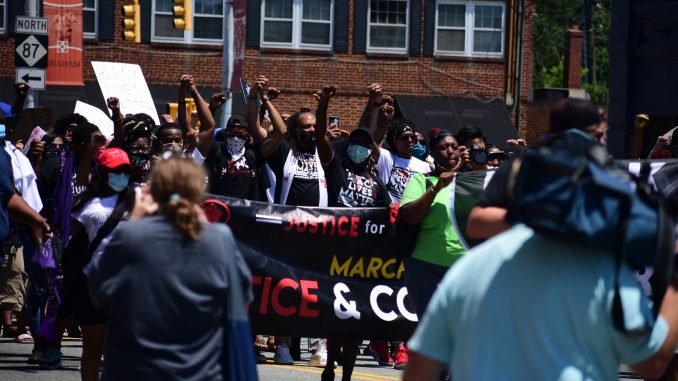 The March For Justice and Community, and massive #BlackLivesMatter mobilization marched from Burlington to Graham on July 11.

In Alamance County there have been increasingly large anti-police and anti-white supremacy mobilizations against a Confederate monument erected on the steps of the historical courthouse in Graham. That’s where in 1870 the Ku Klux Klan lynched Wyatt Outlaw, the first Black elected official in Graham.

The monument has been guarded in equal parts by the Southern Poverty Law Center-designated hate group ACTBAC (Alamance County Take Back Alamance County); the Graham Police Department, an inter-agency tactical unit based in nearby Burlington, the largest city in the county; Elon University Police, the private police force of the second largest private employer in the county; and the Alamance County Sheriff’s Department, which was under investigation for racial violence by the Department of Justice until the Trump administration suspended the investigation.

The county, town and university have faced increasing calls against policing. A massive, predominantly Black demonstration marched on Graham on July 18 in the wake of a successful lawsuit by civil rights organizations against protest bans. The city of Graham has faced renewed investigations into the police killing of Jaquyn Light by statewide journalists.

Down Home NC, a rural organizing formation, has continued to demand that charges be dropped against Bobby Harvey, who was severely beaten by Burlington police last year and placed under arrest on false charges. Harvey was held in the county jail for over 24 hours before receiving medical attention and being transferred to a hospital. At Elon University, a coalition of student organizations, including the Black Student Union and revolutionary workers rights and anti-war student groups, are calling for Elon University Police to be defunded. 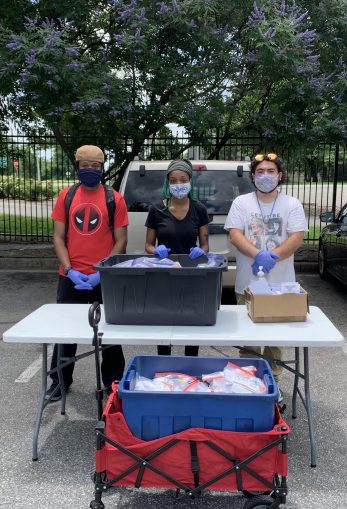 In Greensboro, the largest city in Guilford County, the Working Class-Homeless Organizing Alliance (WHOA), a group of a multi-left tendencies, and the Socialist Rifle Association hold weekly mutual aid distributions and anti-policing educationals for  the city’s large homeless population. WHOA was formed after the police murder of homeless person Marcus Smith in late 2018. BLM GSO, the local #BlackLivesMatter group, has had mass events with Smith’s family nearly every week since May 30.

On July 4, a Confederate monument was torn down by demonstrators in the Greensboro cemetery. Police report that their investigations have found no one who saw or has any knowledge of how it was taken down. 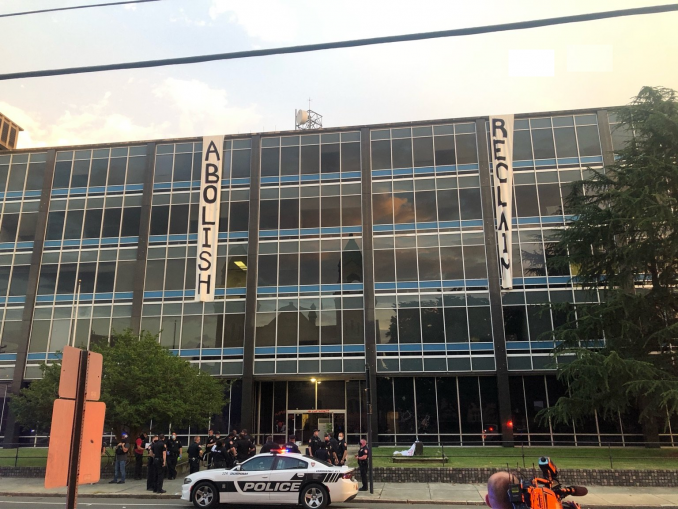 ABOLISH and RECLAIM banners hang from the former police station in Durham.

In the city of Durham, Can’t Pay Won’t Pay, a rent refusal collective, took over the old police headquarters on Saturday, July 18, until Durham cops made 27 brutal arrests, with some people requiring medical treatment on site. Demonstrators were then moved to the Durham Jail.

The Other America Movement has sustained an encampment outside the new police headquarters — in the heart of East Durham which is historically Black— for just over a month demanding the reversal of recent funding increases to the Durham Police Department.

In Durham County, there have been gatherings at the Durham Jail on Friday every week since March 17 to demand #FreeThemAll, led by the Durham Beyond Policing coalition. This group, which includes Black Youth Project 100 and the United Electrical Workers Local 150, prevented expansion of the Durham Police Department last year. 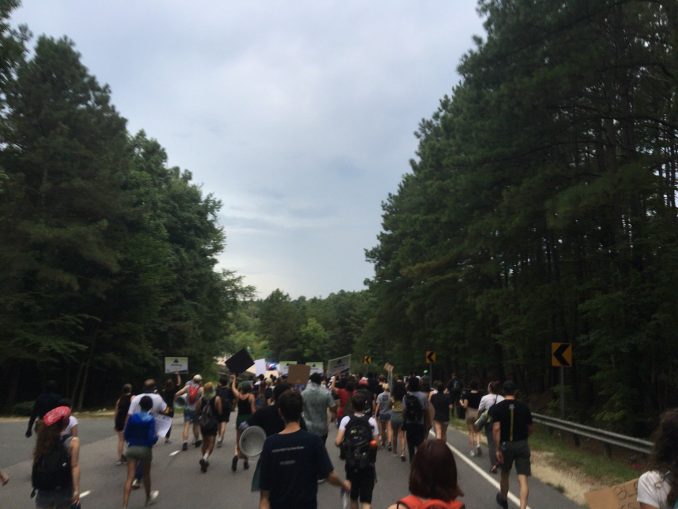 NC BORN, a statewide revolutionary Black socialist organization, has held daily actions in Raleigh for over a month. On July 16 they held a vigil for Kendra Shanice Reid, a student at Winston Salem State University, a Historically Black College/University in the University of North Carolina  system whose lynching was covered up by police in 2017. On July 17, they marched on gentrified neighborhoods in Raleigh after an intimidating letter to a Black family living there threatened them for having a #BlackLivesMatter lawn sign.

In Cary, the Wake County Black Student Coalition marched on the Board of Education meeting on Tuesday, July 14, to demand the county discontinue the school resource officer program and held a traffic blockade for several hours.

Charlotte Uprising has maintained a 24-hour presence outside Mecklenburg County Jail since regular demonstrations began in Charlotte on May 29. On July 12, when the public first became aware that Michael Daniel Mangan was killed in the Mecklenburg Jail, demonstrators covered the entrance of the Sheriff’s Office with red paint.