Dozens of houseless people set up a tent encampment on June 11, right on the Benjamin Franklin Parkway, within sight of high-rise towers where rents average $5,000 a month. The encampment grew to nearly 150 people and was named the James Talib-Dean encampment after a housing activist who recently died. Demands were for immediate housing and attention to the critical lack of affordable housing, the poor conditions in city shelters and the need for permanent housing. 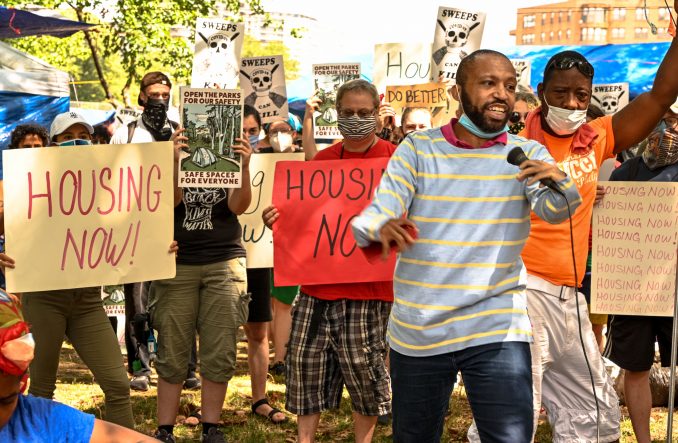 At a press conference on July 13 — after city officials had threatened to evict them on July 17 — the group demanded an emergency transfer of vacant city-owned property into a community land trust for permanent low-to-no-income housing.

“The Philadelphia Housing Authority has about 5,000 vacant properties,” said Sterling Johnson, a Black and Brown Workers Cooperative organizer, speaking on behalf of the broader Philadelphia Housing Action Coalition that organized the encampment. “We want to use them to create a community land trust. We need housing for no-income people, for disabled people.

“What the Housing Authority in Philadelphia and other housing authorities across the country have been doing is to basically privatize public property. This is public property. What they want to do is auction it off to private developers.”

On July 16, Philadelphia Mayor Jim Kenney announced postponement of the eviction, stating a commitment to affordable housing. Kenney said the camp “casts an important light on the racial inequities in our society that impact homelessness.” Since the eviction threat was removed, more houseless people are joining the camp.

Kenney’s action underscores the city’s responsibility to address the housing crisis. Nothing has been done for decades while gentrification has pushed working-class and poor families out of their homes. Black and Latinx communities have been hardest hit.

Even with the mayor’s concession, the struggle is far from over. Within hours of his announcement, the city cut off sanitation contracts that provided bathroom support for the camp. Organizers quickly demanded the city provide access to public restrooms in nearby Von Colln Memorial Field.

In recent months, Philadelphia city officials have cleared several houseless camps, including one outside the Convention Center and one along an I-676 overpass. Houseless people sleeping at the Philadelphia International Airport during the height of the coronavirus pandemic were forced to leave.  Only a few individuals, at high risk for COVID-19, were given temporary shelter in empty hotels.

Organized by the PHAC, Occupy PHA, Workers’ Revolutionary Collective and the Black and Brown Workers Cooperative, the current encampment also reflects the movement against racism and police brutality, with streetwide “Black Lives Matter” banners and several signs declaring the encampment a “No cop zone.”

At the July 13 press conference, encampment organizer Jen Bennetch stated: “This protest is really part of a civil war between homeless people and the city, which has pushed us out of our homes and sold off public housing to gentrifiers.” She called for defunding the police and other city departments whose administrators make six-figure salaries but essentially do nothing to address the housing crisis.

Bennetch pointed out the PHA is the largest housing provider in Philadelphia, yet it has a waitlist that has not moved since 2013. PHA has a history of corruption and blighting properties, particularly in Black and Brown communities. Current housing needs in Philadelphia could be as high as 50,000 units — not just for low-income but no-income families.

This city is not alone. In the U.S., between 8 to 11 million homeless people are living on the streets, in a crumbling shelter system or in encampments, trapped in immediate need for secure housing. Despite the COVID-19 crisis, New York City officials waited an extra week to close schools in March because 100,000 students were homeless and relied on school services for regular meals and shelter.

Yet in early February, as the growing pandemic was becoming known, the Trump administration cut low-income housing assistance programs by $4.2 billion, decreased public housing operating funds by 21% and ended all funding for public housing capital repairs.

In the last five months, over 44 million people in the U.S. have filed for unemployment. Unless Congress passes an extension, expanded unemployment benefits end on July 31. Eviction moratoriums, in place in some U.S. cities, will end on Aug. 31.  Renters and tenant advocates are sounding the alarm about the coming eviction crisis.

The COVID-19 Eviction Defense Project estimates that, of the 110 million people who live in renter households in the U.S., 1 in 5 is at risk of eviction by Sept. 30. As the virus crisis escalates — coupled with the economic collapse that started before the health crisis — mass evictions may soon threaten 19 million to 23 million renters in the U.S.

Housing is a human right.  Housing activists, led by the recently reconstituted National Union of the Homeless, are compiling statistics on actual need. They are asking why the U.S. government can spend billions on the military while funding for housing, already seriously limited, is being cut back even more during an aggressive pandemic.