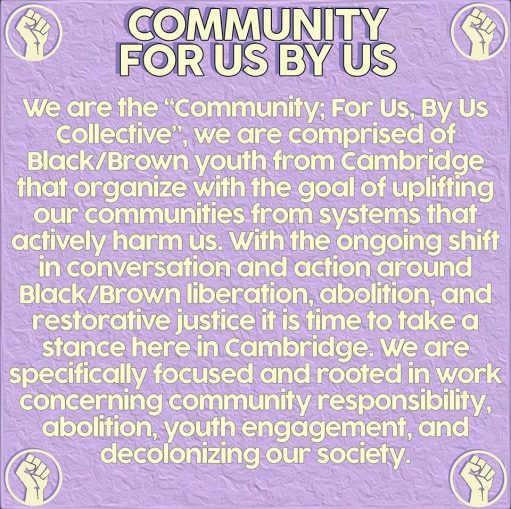 On June 22, the author acted as an accomplice to a Black-youth-organized civil disobedience demonstration in Cambridge, Mass. This is their field report.

Central Square, 6 p.m.  An early summer dusk painted a grapefruit haze over awnings of padlocked dive bars and deserted cafés. Outside City Hall, protesters blocked two lanes of traffic. The sit-in, led by Cambridge Black youth in Community; For Us, By Us Collective (FUBU), demanded reclamation of taxpayer dollars from the trigger-happy hands of police.

Meanwhile, organizers Lorra Marseille, Queen-Cheyenne Wade and Bilien Teklu outlined three demands for the city budget: 1) a Youth of Color collective (wherein youth are compensated for their work) to provide community outreach and infrastructure; 2) Community Safety Crisis Response Programs led by and for marginalized/low-income residents, unaffiliated with the Cambridge Police Department; and 3) a 2 to 3 ratio of affordable housing in few housing developments.  (“Affordable” is defined by maximum qualifying incomes of $40,000 for two-parent households and $25,000 for single-parent ones).

Taking to the streets

A black wire threaded through one of the cart’s mesh holes ended in a handheld mic. This traveled up and down the march’s frontlines as organizers took turns leading chants. Flanked by street medics with crosses of red duct-tape stuck to their T-shirts, protesters sat, spread across the intersection for 90 minutes.

“I wrote this poem six years ago,” said Tashawn Taylor, who performed a powerful tribute to hundreds of Black lives lost every year to police violence. “But if you told me then it would still be relevant today … I would’ve believed you.”

Queen-Cheyenne Wade gave a powerful speech demanding a new era of “trust in our community’s abilities to imagine and create a world where we can all live freely, in love and liberation.” Halfway through her speech, she began to sing:

“Which side are you on, my people?”

She raised her voice over the wail of sirens as a squad of motorcycle cops closed in from both sides: “Which side are you on?”

Officers in riot gear began directing stationary vehicles with billy clubs. Traffic had been stopped since the beginning of the demonstration by neon-vested street marshals supporting the movement.

“We’re on freedom’s side!” the crowd yelled.

As of press time, Cambridge City councilors agreed to postpone a scheduled increase to Cambridge’s police budget until the 2021 Fiscal Year. While one would hope for more decisive action from city leadership, this marks a definitive first step toward Community FUBU’s demands. Here’s what you can do today to support their work:

Remember, comrades, claim no easy victories, and fight on! The road ahead is long and winding, but so far this much is clear: The People’s Revolution has taken to the streets. Black youth are at the front lines, and if you’re still watching from the sidewalk, the time has come to act.  Either get behind them or get out of their way.