July 11 — Today the Atlanta community continued to protest, demanding community control for the site of the burned-out Wendy’s restaurant where Atlanta police murdered Rayshard Brooks the night of June 12. 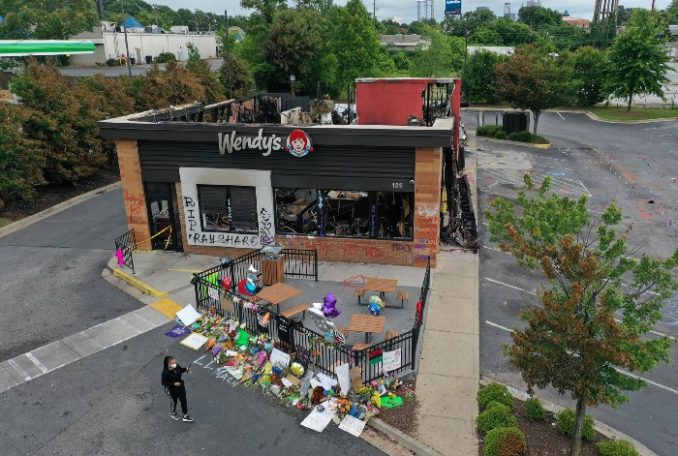 The Saturday demonstration, organized by Community Movement Builders, was in support of a Rayshard Brooks Peace Center on the site. The center would be a place where the community can gather without fear of repression. It would be completely controlled and operated by those in the community with no control by any government forces — especially the police.

Protesters marched about 2 miles to the Wendy’s site, which has become a memorial to Brooks. Some protesters were armed and waved the red, black and green flag of Black Liberation as they marched.

Some protesters also demanded justice for 8-year-old Secoriea Turner, who was tragically killed near the site of the RBPC on Saturday, July 4.

At the site were shirts and signs dedicated to Brooks’ memory. Numerous abolitionist messages were sprayed on Wendy’s ruins. The site has also become a space to honor all victims of the Atlanta Police Department and of police nationwide.

Then on Monday, July 6, the APD, using some city workers — some of whom were reluctant to cooperate — tore apart the memorial. The APD threw away the numerous shirts, flowers and other artifacts dedicated to Brooks and other APD victims. The demolition happened after Atlanta Mayor Keisha Lance Bottoms claimed that armed guards at the RBPC site were responsible for the shot that killed Secoriea Turner.

Those who were occupying the site at the time, including Turner’s aunt, said that the shooters were not associated with the RBPC and, furthermore, the shooting did not occur at the burned-out Wendy’s. The shooting happened across the street.

Although it is not entirely clear what happened on the Fourth of July, multiple things have been made clear by organizers and supporters of the RBPC. They have emphasized that the killing of Turner was tragic and devastating — and rightfully so, as those in the struggle for Black Lives would never want to see the death of a child.

Organizers were also clear that Mayor Bottoms is using the tragedy of Turner’s killing to further repress those fighting for Black Lives. Bottoms used Turner’s death to spew Black-on-Black crime rhetoric, saying “Members of the community [are] shooting each other.” (tinyurl.com/yc9nj9qe)

She attempted to shift attention away from police brutality, the responsibility of the APD for Brooks’ death and the righteous demands of the Black community, by saying: “You can’t blame this on a police officer; you can’t say this is about criminal justice reform.”

Despite Bottoms’ disingenuous comments, protesters in Atlanta are still struggling to establish a Rayshard Brooks Peace Center where Brooks were murdered, knowing that the police are not protectors of Black people.

Saturday was just the beginning of what Community Movement Builders organizations says will be a continued movement to establish the center.