On the last day possible, June 30, the City University of New York announced it was going to lay off 3,000, or more than 20 percent, of the 13,000 adjunct teaching staff, who are represented by the Professional Staff Congress, American Federation of Teachers Local 2334. 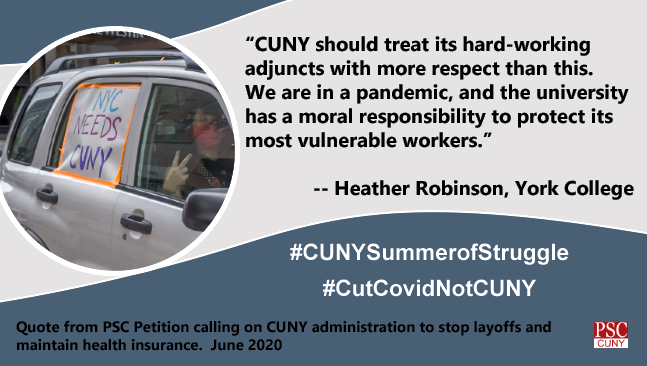 The PSC announced a major suit against CUNY on July 2 based on a violation of the requirements of federal COVID-19 stimulus money it  received because it “has not kept people employed to the greatest extent practicable.” In effect, CUNY has the money from the package, has spent some of it for its students, but is abandoning the adjunct staff.

These layoffs will also affect thousands of students who want to get the education these teachers can provide, but who now won’t get the courses they need.

Besides the lawsuit, the PSC announced a petition campaign, car caravans and extensive deliberations within the union about “disruptive job action during the fall semester in order to save lives, save jobs and save CUNY.”