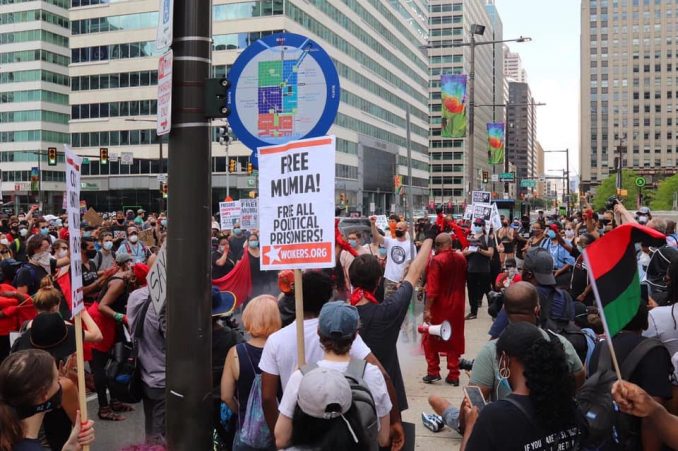 Neither the hot sun or the nearly 100-degree heat deterred the several hundred protesters who assembled in front of the city’s Municipal Service Building, where a monument to white supremacist Police Commissioner and Mayor Frank Rizzo was recently torn down.

The protest, demanding the immediate release of Mumia Abu-Jamal and all political prisoners, had already been going on for three hours before Pam Africa addressed the large crowd. Police failed to prevent the marchers from shutting down the major roadways in the heart of Center City Philadelphia. The police finally retreated back to the adjacent intersections when the march wound its way south to the other side of the City Hall.

Standing next to a statue of Octavius Catto, a Black civil rights activist who was murdered in the street by a racist white man in 1871, Pam Africa stated, “We come from an era when we demonstrated in the streets about police brutality. The politicians came along to say, ‘We’ll arrest them. You all go home. We’ll have a trial.’ That went on year after year after year. At this point we have resisted the beatings, the maimings, the killings. And it keeps coming back.

“We keep getting more powerful. In the year 2020, they understand. We’re not playing with these motherfuckers.”

Dictatorship of the FOP

Speakers pointed out the stranglehold that the Fraternal Order of Police held over the city’s political structures. A recent ruling by a Black judge, Leon Tucker, acknowledged that prosecutorial and judicial misconduct in Mumia’s case should at least grant him a new trial. Mumia said the ruling felt like the first time his case was heard by someone who wasn’t in the pocket of the FOP.

The rally and march was called by a vast coalition including the International Concerned Family and Friends of Mumia Abu-Jamal, Mobilization4Mumia, Workers World Party, the International Action Center, We Charge Genocide, Red Fist, Philly REAL Justice, Black Alliance for Peace, and the Party for Socialism and Liberation. Solidarity protests were held in Germany, France, and across the United States demanding  Abu-Jamal’s immediate release.

Protests have been held every July 4th since 1982 to expose the gross judicial and prosecutorial misconduct in the trial of Abu-Jamal, who was a Black Panther, a friend of MOVE, and former president of the Philadelphia Association of Black Journalists. He was shot by police in December 1981 and framed for the shooting death of a cop.

“I wanna point out,” Pam Africa explained, “that on July 4th, 1982, Judge [Albert F.] Sabo said to the jury: If you don’t want to stay here over the holidays, you come back with a decision. The trial was a railroad, now. July 2nd, they came back with guilty. July 3rd, they came back with the death penalty. July 4th, they went home to party. Ever since that day there has never been a July 4th that we didn’t turn the motherfucker out!”

In a sworn affidavit, the court stenographer at Mumia’s trial swore that she heard Judge Sabo say in his chambers, “I’m going to help them fry the n*****.”

This coming Aug. 17 marks 25 years since then-Gov. Tom Ridge signed Mumia’s first death warrant. Thousands stopped the execution on Aug. 12, 1995 in an emergency demonstration in Philadelphia. Millions for Mumia was formed as a global movement in 1999 when protests worldwide took place on April 24, Mumia’s birthday, to successfully prevent a second planned execution from going forward.

In 2011, Mumia was finally taken off of death row; now the state is trying to keep him in prison until he dies.

Pam Africa continued: “Some of y’all was seeds in your daddies when this first happened. And then you became that bigger life in your mama who was in these streets. And y’all learned from them. And here you are now on the front lines. At one point I was really scared, like what are we going to do? Who’s gonna take the reins? And I feel so good, so fucking proud, that I stand here and I see revolutionaries! Ready! If you gotta burn the motherfucker down, burn this motherfucker down!”

Kempis Ghani Songster of the Amistad Law Project also addressed the crowd. Songster was 15 years old when he was sentenced to life in prison. He finally won his release in 2017, after 30 years behind bars. He recited this passage from Frederick Douglass’ germinal text, “What to the Slave is the Fourth of July?”:

As protesters paused to drink water and eat watermelon provided by stalwart abolitionists from Food Not Bombs Solidarity, Mumia Abu-Jamal himself was able to call in and speak to the crowds.

“This is a special time,” Mumia said. “A time like someone my age has not seen in many years. But it’s a time that’s finally here. And that means it’s the right time.”

“I just called to let you know I love you all.” (Hundreds shouted back, “We Love You!” and “Free Mumia!”) “I feel it. I thank you all. I think of you all. And I will be with you all. Y’all keep doing what you’re doing. I’ll keep doing what I’m doing. And we will meet in the whirlwind.”