On the heels of a campaign rally at the site of the 1921 Tulsa, Okla., white-mob massacre of Black Wall Street, President Trump continued a tour of white supremacy symbols with a July 3 rally and fireworks at Mount Rushmore. This monument to settler colonialism is in the Black Hills, the Paha Sápa, also known as He Sápa — lands sacred to the Lakota Nation, lands also historically significant to the Cheyenne, Arapaho and Omaha Nations. 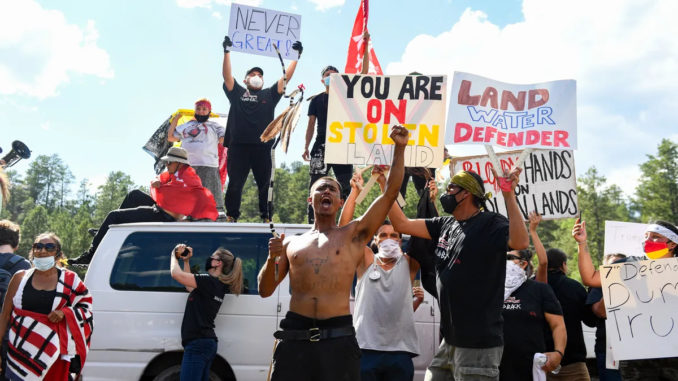 Under the 1868 Fort Laramie Treaty, the Black Hills are unceded territory of the Oglala Lakota. Mount Rushmore is 25 miles southwest of Rapid City, S.D., and about 40 miles west of Pine Ridge Reservation. Before the event, Cheyenne River Sioux Tribal Chairman Harold Frazier said, “The president is putting our tribal members at risk [of COVID] to stage a photo op at one of our most sacred sites.

“Visitors look upon the faces of those presidents and extol the virtues that they believe make America the country it is today. Lakota see the faces of the men who lied, cheated and murdered innocent people, whose only crime was living on the land they wanted to steal.” (Indian Country Today, July 2)

Lakota treaty defenders drove vans across Highway 16 at the checkpoint for rally traffic from Keystone, S.D., to the monument, then disabled them.

About 150 treaty defenders — youth, families and elders — danced, chanted and flew flags of the Oglala Nation, the Cheyenne River Sioux Tribe and the American Indian Movement. Signs called for ending 500 years of genocide, stopping the Keystone XL Pipeline and upholding the 1868 Treaty of Fort Laramie to return the Black Hills to the Lakota people. (Rapid City Journal, July 3) Chants heard included, “Land Back” and “We Can’t Breathe.”

At his rally, Trump said, “We will never abolish our police or our great Second Amendment.” (Rapid City Journal, July 3) The Second Amendment confirmed the legal basis of settler militias, historically used to kill Indigenous people and hunt down escaped enslaved Africans.

Trump said, “Our nation is witnessing a merciless campaign to wipe out our history, defame our heroes, erase our values and indoctrinate our children.” Under a new executive order from Trump, people who deface or tear down statues will face a minimum of 10 years in prison.

The president, who removed protection from Bears Ears and the Grand Staircase Escalante, and threatens the Grand Canyon with uranium mining, announced a new “National Garden of American Heroes.” The garden will feature statues of several presidents and a range of proposed historic figures, from Davy Crockett and Billy Graham to Harriet Tubman, the Rev. Dr. Martin Luther King Jr. and Antonin Scalia.

After the speeches, fireworks were set off at the monument, in the middle of a forest where fireworks had been banned for years due to the danger of a forest fire.

The Indian Wars and Mount Rushmore

President Ulysses Grant gave permission in 1874 for Lt. Col. George Armstrong Custer to lead a 1,000-man military expedition with prospectors and journalists into the Paha Sápa, where they “found” gold — the world’s only veins of rose gold. A gold rush ensued; within a year 1,000 miners invaded. (tinyurl.com/ybcv6xnd)

Newspapers demanded annexation. Congress offered money to the Lakota, who said, “The He Sápa are not for sale. One does not sell their holy land.” (Tim Giago, Rapid City Journal, July 3)

Congress stole the Black Hills; Grant sent in the U.S. Army and started the genocidal Plains Indian Wars. On June 25, 1876, the Lakota, Dakota, Northern Cheyenne and Arapaho Nations defeated the 7th Cavalry at the Battle of the Little Bighorn, when those Indigenous nations were attacked at their annual winter convocation.

The buffalo herds were brutally destroyed, and in 1889, Congress cut rations in an attempt to starve out the Lakota. The war ended with the 1890 Wounded Knee Creek massacre of Big Foot’s band, who were starving and attempting to reach the reservation in a brutal northern Plains winter.

Gutzon Borglum, a member of the KKK, carved the faces of four presidents into the mountain, known as Six Grandfathers to the Lakota, from 1927 to 1944. Mount Rushmore depicts two slaveowners. And Abraham Lincoln, the president who issued the 1862 Emancipation Proclamation, ordered the mass hanging of 38 random Dakota prisoners in the 1862 Dakota uprising against the settler state of Minnesota.

‘The Black Hills are not for sale’

July Fourth, commemorating the “independence” declaration of the settlers in the 13 colonies against England, represented the settlers’ ability to take over the slave trade in North America and to continue to send militias into Indigenous nations to murder, enslave and steal the lands, to create more settlements and sell more enslaved African people. Beginning in 1776, the settlers flooded into Ohio territory, which the Crown had forbidden them to do.

During the highway blockade, organizer Nick Tilsen, Oglala Lakota of NDN Collective, tried to negotiate with the National Park Service on the removal of treaty defenders and the vans parked in the middle of the road. “We ain’t going nowhere,” Tilsen said. “This is our land. This has been our land for thousands of years.” (Indian Country Today, July 4) Treaty defenders ask supporters to contribute to the Black Hills Bail and Legal Defense Fund (bhlegalfund.org).

As the uprising in solidarity with Black Lives Matter shows no sign of slowing down, Indigenous and Black solidarity deepens and lifts these connected struggles.