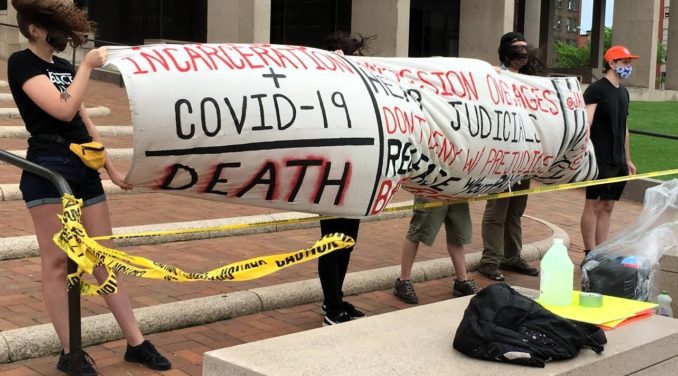 Outside Cuyahoga County jail, Cleveland, May 29.

The Alliance accuses jail authorities of failing to follow their own protocols as well as ICE standards.

According to the Alliance report, “None of the inmates and detainees at Morrow County have been seen by a doctor in the facility, despite their COVID diagnoses. Nursing staff are not present at the jail overnight or on the weekends, and even when they are there, they often decline to provide health care, including Tylenol. Jail staff have repeatedly refused to call an ambulance for detainees in serious distress. What’s more, there are no interpreters available to translate detainee medical conversations, calling into question how jail staff are even making such life-or-death decisions in the first place.” (TiffinOhio.net, June 8)

While jail officials claim the COVID infection rate is less than 100 percent, Alliance members argue that all the prisoners are symptomatic and the tests are not being administered properly.

Migrant rights activists and prison abolitionists in Ohio have united to demand the jail be closed and all the prisoners set free. They have become a presence at various meetings of Morrow County political officials where they present damning testimony. This pressure may be why the jail has released a number of ICE detainees and is not accepting more at this time.

However, a majority of the migrants let out of Morrow County jail have been either deported or moved to other ICE facilities, where conditions are still deplorable and COVID is spreading rapidly. The few returned to their families and communities were represented in a lawsuit filed by the Ohio branch of the American Civil Liberties Union.

The county prisoners have not been convicted of any crime and are mostly in jail accused of minor offenses, yet all are in danger of dying from the virus. A disproportionate number are men of color, while Morrow County is almost 98 percent white.

Most prisons in the country have an extremely high rate of COVID infection. In Ohio alone, 86 prisoners have reportedly died of COVID.

The Cuyahoga County Jail in Cleveland drew national attention when it released 900 prisoners, greatly relieving notorious overcrowding. However, all but 200 of them were not freed. They were sent to state prisons, which have some of the highest infection rates in the country. Prisoners, who make up 0.4% of Ohio’s population, suffer 17 percent of the state’s COVID cases.

Those who have been released are required to wear ankle bracelets — and then are charged $56 per week for them! Companies which manufacture these home imprisonment devices have very lucrative contracts with Cuyahoga County.

The wearers are being punished for crimes they have not even been convicted of, making a mockery of the “presumption of innocence.” The same is true for those transferred to state penitentiaries, which are only intended for prisoners already convicted of crimes.

Every prisoner in the country is facing a possible death sentence via COVID, regardless of their alleged “crime.” More prisoners in the U.S. have died of COVID this year than from state executions over the past 10 years. (deathpenaltyinfo.org, themarshallproject.org)

The movement is growing to “Free them all! Tear down the walls!”