Emmanuel “Toto” Constant was in charge of FRAPH (the Revolutionary Front for the Advancement and Progress of Haiti) during the 1991-94 coup against President Jean-Bertrand Aristide when this death-squad organization killed 3,000 people and wounded and maimed many more. During that time, he was also on the CIA’s payroll. 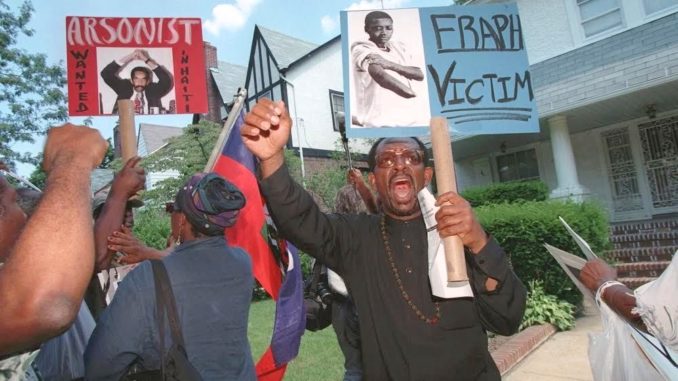 In 1994, Toto showed up in the U.S. after fleeing to the Dominican Republic on foot and was basically granted political asylum, even though the U.S. Secretary of State, Warren Christopher, opposed it because it would expose that the U.S. supported FRAPH’s genocidal actions in Haiti.

In 2006, Toto was ordered by the courts to pay $19 million to three women because FRAPH had raped and abused them. He was released from a U.S. prison after serving 12 years for mortgage fraud and other financial crimes.

Immigration and Customs Enforcement  had originally scheduled his deportation for May, under its program to deport those convicted of felonies back to their country of origin, even if they were coronavirus-positive. Many news sources such as the Wall Street Journal, Washington Post, CNN, New York Times and ProPublica have documented the devastating health effects of this program on poor countries like Guatemala, Honduras and Haiti.

While Toto was taken into custody as soon as he stepped off the landing pad on June 23, the Haitian government faces a quandary. Toto’s allies in the Bald-Headed Haitian Party (PHTK) are currently in total control of the government. Parliament is dissolved, and judges are on strike.

As Mario Joseph, a lawyer with a long history in the progressive movement in Haiti, put it in Haïti-Liberté: “There really is no difference between the PHTK and the FRAPH. Both organizations have the same modus operandi of violence, corruption, terror and banditry.” (June 25)

Toto under Haitian law has the right to a new trial, since he was previously convicted in absentia. Some of his subordinates in FRAPH, who faced similar legal jeopardy, have already been acquitted and are prominent in PHTK circles.

His acquittal would make it clear that the government of the United States supports the current repressive regime in Haiti lock, stock and barrel. It remains to be seen how the liberal wing of the opposition, who are not totally disabused of the notion that the U.S. supports democracy, justice and human rights in Haiti and throughout the world, would react to that.

Forcing Haiti to accept Toto and the other 25 deportees on his plane — even if they are coronavirus-positive — makes it clear that poor countries, ones that depend on U.S. remittances, are forced to accept whomever the U.S. sends their way.