These words rang out on June 20 as hundreds of Clevelanders, members of the LGBTQ2S+ community and allies, marched to the theme, “All Black Lives Matter.” They took to the streets to raise the name of Tony McDade, a Black trans man killed by police in Tallahassee, Fla., and to link the mass Black Lives Matter movement to Pride month. 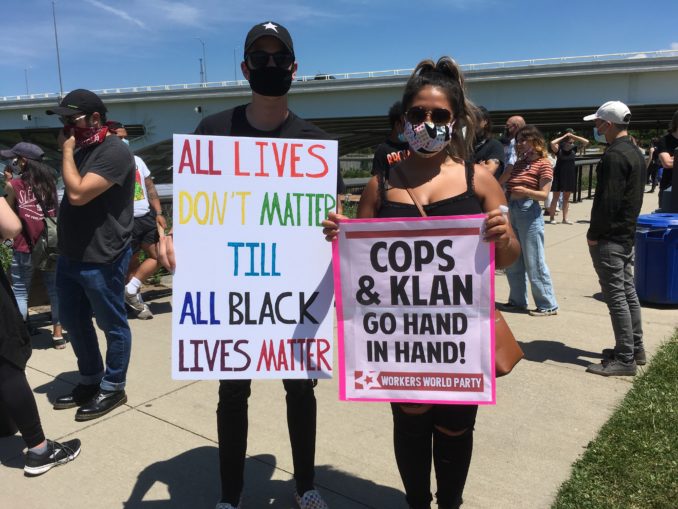 Riah Melton, a Black trans woman murdered in Liberty Township, Ohio, June 9 was also honored. After being found slain, Melton was deadnamed and misgendered, her lifeless body referred to as “it” by the police and media.

Marchers carried dozens of homemade signs, many reading “Black Lives Matter” and others with messages specific to oppressions faced by trans people of color, including many murders, at least 14 in the first half of this year. Demonstrators marched for several miles through Cleveland’s Near West Side, ending at Edgewater Park on Lake Erie.

This was one of many “All Black Lives Matter” marches that have brought out tens of thousands across the country this month. On June 14, 25,000 marched in Los Angeles, followed by 15,000 in Brooklyn, N.Y., the next day. More marches have taken place in Chicago, Boston, Columbia, S.C., and other cities.

The Columbus demonstration was a welcome departure from official celebrations of LGBTQ2S+ Pride in recent years, which have largely become corporatized “parades.” Political demands, if there are any, have been limited to addressing homophobia and transphobia.

Many more events are planned, both live and virtual, to make Pride Month a month of solidarity with the Black Lives Matter upsurge throughout the U.S.