Taking bold stands against systemic racism and oppression is nothing new for the Bay Area’s Longshore and Warehouse Union (ILWU) Local 10. The union has organized work stoppages to protest many injustices from apartheid in South Africa to the police murder of Oscar Grant to the Israeli bombing of Gaza. Local 10 was instrumental in organizing the Million Worker March in 2004 and bringing back the militant tradition of May 1, International Workers’ Day, to the San Francisco Bay Area. 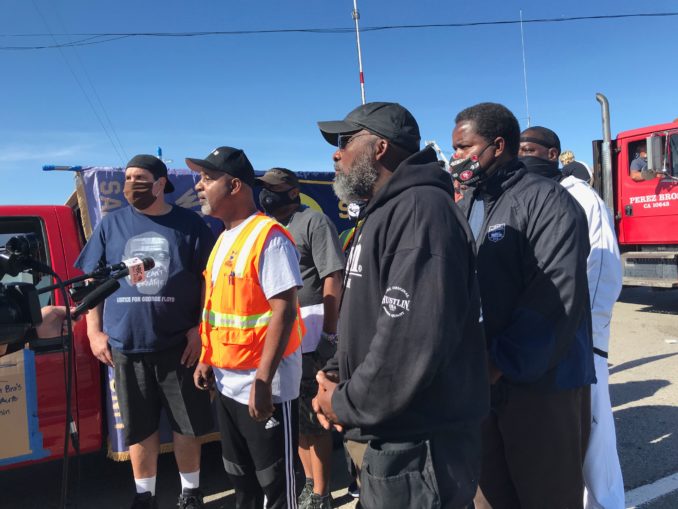 When Local 10 put out a call for action on Juneteenth (June 19, 1865, is the date the Emancipation Proclamation reached Texas during the Civil War) to protest police terror against George Floyd, Breonna Taylor and all the victims of police brutality, every single ILWU local joined in to shut down the entire West Coast.

On June 19, longshore workers brought shipping commerce to a halt from Vancouver to San Diego. This work stoppage cost the ship owners and ports tens of million of dollars.

In Oakland, ILWU Locals 10, 34, 75 and 91 organized a march and a car caravan under the union banner: “An Injury to One Is an Injury to All.” On the morning of Juneteenth, thousands of people on foot, in cars, on bicycles and even on motorcycles showed up at the Port of Oakland.

Then the march and car caravan took off slowly toward downtown Oakland. Thousands of demonstrators wearing masks, many carrying homemade signs and banners, streamed across the Adeline Overpass down to the city streets. ILWU members and supporters stopped traffic to allow the huge protest to work its way up Broadway. On this day, not only did all work stop at the Port of Oakland — all traffic in Oakland ground to a halt!

First stop was the Oakland Police Department headquarters, where Michael Brown Sr., whose son was killed in Ferguson, Mo., in 2014; the parents of Oscar Grant; and other victims of police terror spoke out for a citywide campaign to defund the OPD and invest in Oakland’s communities. Cat Brooks of the Anti-Police Terror Project called on everyone to support this effort as well as the campaign by the Black Organizing Project to end the school police department, creating “police-free schools.” 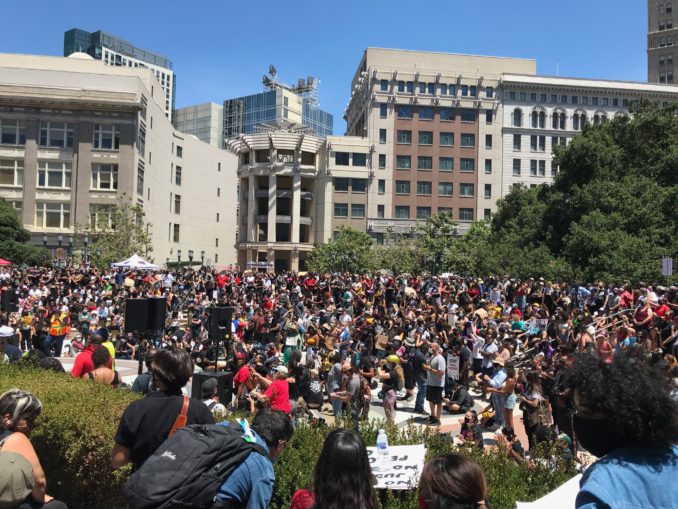 Finally the march reached Oscar Grant Plaza (renamed by the people after Grant’s 2009 murder by Bay Area Rapid Transit police). The plaza was filled beyond capacity with thousands of demonstrators, and the streets were clogged with hundreds of cars from the caravan. Closing speakers included ILWU members, community activists and family members of those killed by police — all expressing solidarity with the Black Lives Matter movement.

One special guest speaker was hip-hop artist, rapper and movie director, Boots Riley, who comes from Oakland. Riley talked about the political significance of the shutdown. He asked everyone to imagine what would happen if this wasn’t just a one-day shutdown of West Coast ports. He said the financial costs of an indefinite shutdown would be unimaginable, but that’s what would be needed to make change happen.

Riley said, “We need to show them we ain’t asking, we’re telling. We’ll stop the world and make them motherf—ers jump off.” (SFGATE.com, June 20)